Weather-related natural disasters are up

With COP21 poised to begin in Paris, a new UN report suggests that weather-related disasters were nearly twice as frequent over the past decade as two decades ago. 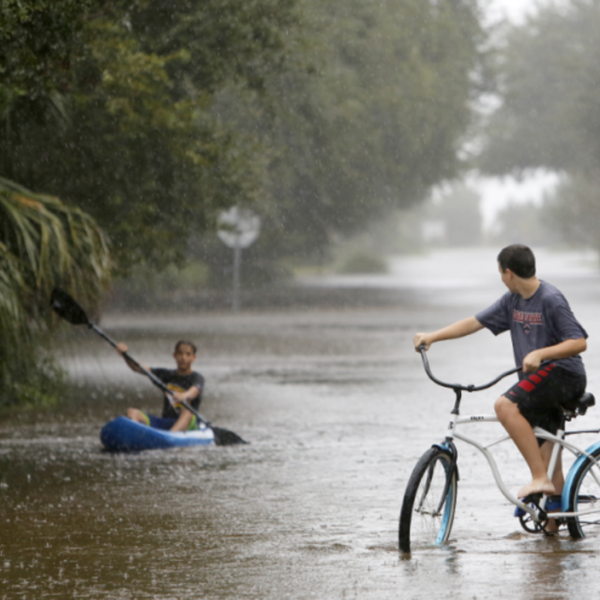 Just one week from today, world leaders will converge in Paris for COP21, also known as the 2015 Paris Climate Conference. And today – November 23, 2015 – the United Nations released a report indicating that weather-related natural disasters are becoming more frequent. The rate was nearly one per day over the past decade, a rate nearly twice as high as two decades ago. The report said:

While scientists cannot calculate what percentage of this rise is due to climate change, predictions of more extreme weather in future almost certainly mean that we will witness a continued upward trend in weather-related disasters in the decades ahead.

The report is titled The Human Cost of Weather Related Disasters. It says that between 2005 and 2015, there were on average 335 weather-related disasters per year. That figure is nearly double the number of weather-related natural disasters reported from 1985 to 1994.

According to the reoprt, over the last 20 years, 90% of major disasters have been caused by 6,457 recorded floods, storms, heatwaves, droughts and other weather-related events. The report shows Asia to be the hardest-hit region by weather-related natural disaster over the last 20 years, but the U.S. has a slight edge over China as the hardest-hit single country. The five countries hit by the highest number of disasters are the United States (472), China (441), India (288), Philippines (274), and Indonesia, (163). Note that the U.S., China and India are relatively large in land area, while the island nations of the Philippines and Indonesia are small, yet vulnerable. The Philippines, for example, has only 115,831 square miles (300,000 sq km), in contrast to 3,794,083 square miles (9,826,630 sq km) for the U.S.

… since the first Climate Change Conference (COP1) in 1995, 606,000 lives have been lost and 4.1 billion people have been injured, left homeless or in need of emergency assistance as a result of weather-related disasters.

… much higher than the recorded figure of US$1.891 trillion, which accounts for 71% of all losses attributed to natural hazards over the 20-year period. Only 35% of records include information about economic losses. UNISDR estimates that the true figure on disaster losses – including earthquakes and tsunamis – is between US$250 billion and US$300 billion annually.

While geophysical causes such as earthquakes, volcanoes and tsunamis often grab the headlines, they only make up one in 10 of the disasters trawled from a database defined by the impact.

Read the United Nations’ statement on the report

Read a Reuters story about the report at Huffington Post

Bottom line: With COP21 poised to begin in Paris, the United Nations today released a report indicating that weather-related natural disasters occurred almost daily in the past decade, a rate almost twice as high as two decades ago. The report is titled The Human Cost of Weather Related Disasters.