Watch for the official announcement about 2011 sea ice minimum, coming soon. Expect to hear that 2011 proved to be a year of extreme melt.

In case you didn’t hear, the National Snow and Ice Data Center (NSIDC) made a preliminary announcement in September 2011 that Arctic sea ice has reached its lowest extent for the year 2011 and that the minimum ice extent was the second-lowest in the satellite record, after 2007. In other words, 2011 proved to be a year of extreme melt, and 2011’s sea ice minimum continues the trend of rapidly decreasing summer sea ice.

NSIDC emphasises this report is preliminary. It will be releasing an official report on the extent of the 2011 arctic sea ice minimum in early October, once monthly data are available for September. EarthSky’s Dr. Deanna Conners will have more for you then.

Late season melt or a shift in wind patterns might have decreased the sea ice extent still more before the winter freeze-up begins. That’s why NSIDC is waiting until early October for the official announcement. 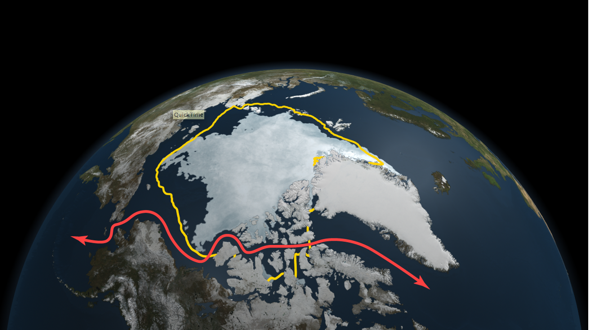 Comparison of the 30-year average minimum extent (in yellow) and the Northwest Passage (shown in red.) Image Credit: NASA

Bottom line: Watch for the official announcement about 2011 sea ice minimum, coming soon. Expect to hear that 2011 proved to be a year of extreme melt.

Read more here from NASA about the 2011 sea ice minimum