Mirfak isn’t as famous as Algol, its brother star in the constellation Perseus. But Mirfak is easier to find and can help guide you to Algol. 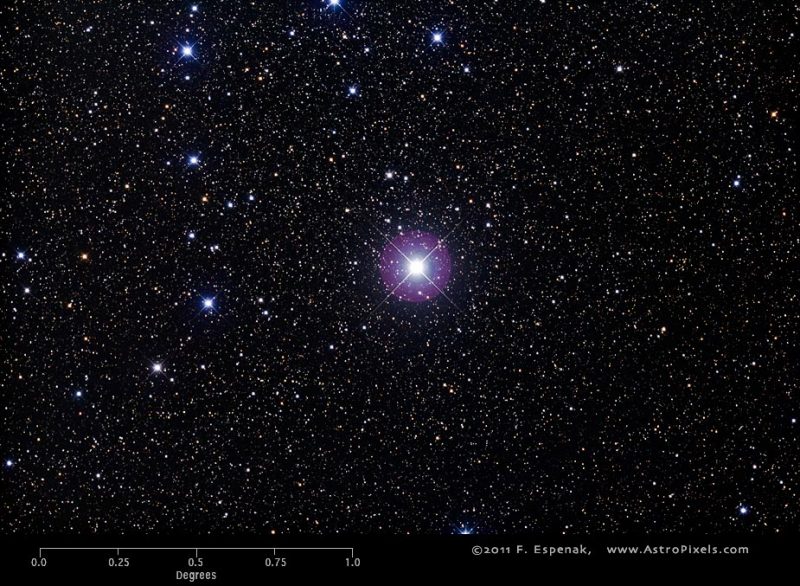 The constellation Perseus contains the sky’s most celebrated eclipsing binary star, Algol, sometimes called the Demon Star. Algol wins notoriety for its wild swings in brightness, which recur with clock-like precision. However, Mirfak is the easier of the two stars to find, and can serve as your guide star to Algol.

While you’re looking at Perseus, be sure to scan with your binoculars for the Double Cluster. The constellation Cassiopeia can help you find it. The Double Cluster nearly marks the radiant of the Perseid meteor shower. Image via madmiked/ Flickr.

How to find Mirfak. The name Mirfak is derived from Arabic, meaning the Elbow of the Pleiades. In fact, the constellation Perseus lies due north of the Pleiades star cluster, also called the Seven Sisters. In other words, you can find Mirfak and Perseus between the Pleiades cluster and Polaris, the North Star. 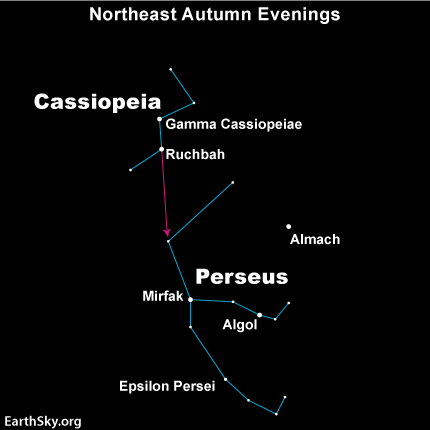 Look northeast on December evenings for the graceful shape of the constellation Perseus.

You can also take a more direct route to Mirfak, if you’re familiar with the M or W-shaped constellation Cassiopeia the Queen. Draw an imaginary line through the Cassiopeia stars Navi (Gamma Cassiopeiae) and Ruchbah to jump over to Mirfak.

Mirfak is the one Perseus star to stand out in moderately light-polluted skies, as its brilliance matches that of the stars of the famous Big Dipper. 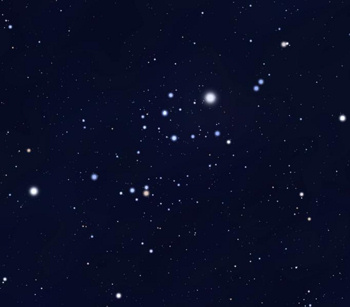 The Alpha Persei Moving Cluster (Melotte 20). Mirfak is the most prominent member of this grouping of stars. Image via Wikimedia Commons.

Science of Mirfak. At a distance of about 600 light-years, Mirfak lies much farther than the Big Dipper stars, so this star has to be intrinsically very luminous to shine so brightly in our sky. If Mirfak stood at the sun’s distance from Earth, its disk would cover several thousand times more sky. Moreover, Mirfak would shine thousands of times more brightly than our sun.

On a dark night, you might discern a faint array of stars clustering around Mirfak, a bejeweled realm of the heavens that glitters all the more in binoculars. This assemblage of stars is known as the Alpha Persei Moving Group (Melotte 20), of which Mirfak is the most prominent member. Although some feel that this stellar grouping is too dispersed to be called a star cluster, these stars nonetheless move in the same general direction through space, and were born from the same cloud of gas and dust some 30 to 50 million years ago.

Bottom line: How to see the star Mirfak.