Time to look for Mira the Wonderful, a famous variable star

Around August of 2013, look for the star known as Mira the Wonderful. It’s a famous variable star in the constellation Cetus the Whale. 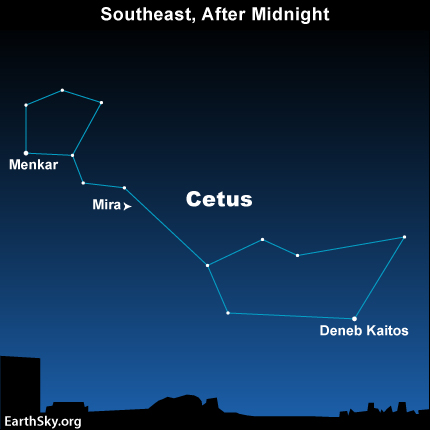 In late July and August 2013, Mira’s brightness should be at its peak. You should be able to see it with the eye. Mira’s constellation, Cetus, will be in the southeast after midnight – or at its highest in the south before dawn.

More often than not, you won’t see Mira – which is also known as Omicron Ceti – with the eye alone. Mira is a long-period variable star, whose brightness varies in a cycle of over about 11 months. Long ago, early stargazers must have looked at the pattern of stars we know as Cetus the Whale and noted the location of a star that was sometimes visible … and sometimes not. That’s probably how Mira came to be called Wonderful. In 2013, is expected to peak in brightness in late July or early August. To see Mira’s constellation – Cetus the Whale – at this time of year, it’s best to get up before dawn. Mira reaches its highest point in the nighttime sky just before dawn in July and August 2013.

How can you find Cetus the Whale, Mira’s constellation? First, in July and August 2013, you’ll be looking in the predawn hours before sunrise. From middle and far northern latitudes in the Northern Hemisphere, you’ll be looking southward – from the Southern Hemisphere, more overhead. Notice the pattern of the Whale. The Head of the Whale is shaped like a lopsided pentagon and is generally the easiest part of Cetus to identify. Look for the medium-bright star Menkar in this lopsided square pattern. Menkar is the brightest star in Cetus. It’s located about 220 light-years away.

Mira lies close to the Head of the Whale. At its brightest, hopefully around now, you should be able to see it with the eye alone.

Also, look for Deneb Kaitos in the Tail of the Whale. When you see the word “deneb” in star names, it nearly always means “tail.”

Although this star’s variable character is not altogether predictable, it is usually bright enough to see with the unaided eye for a month or two. Come to know the constellation Cetus, and watch for Mira. On one of these dark nights, you just might see Mira the Wonderful pop into view! 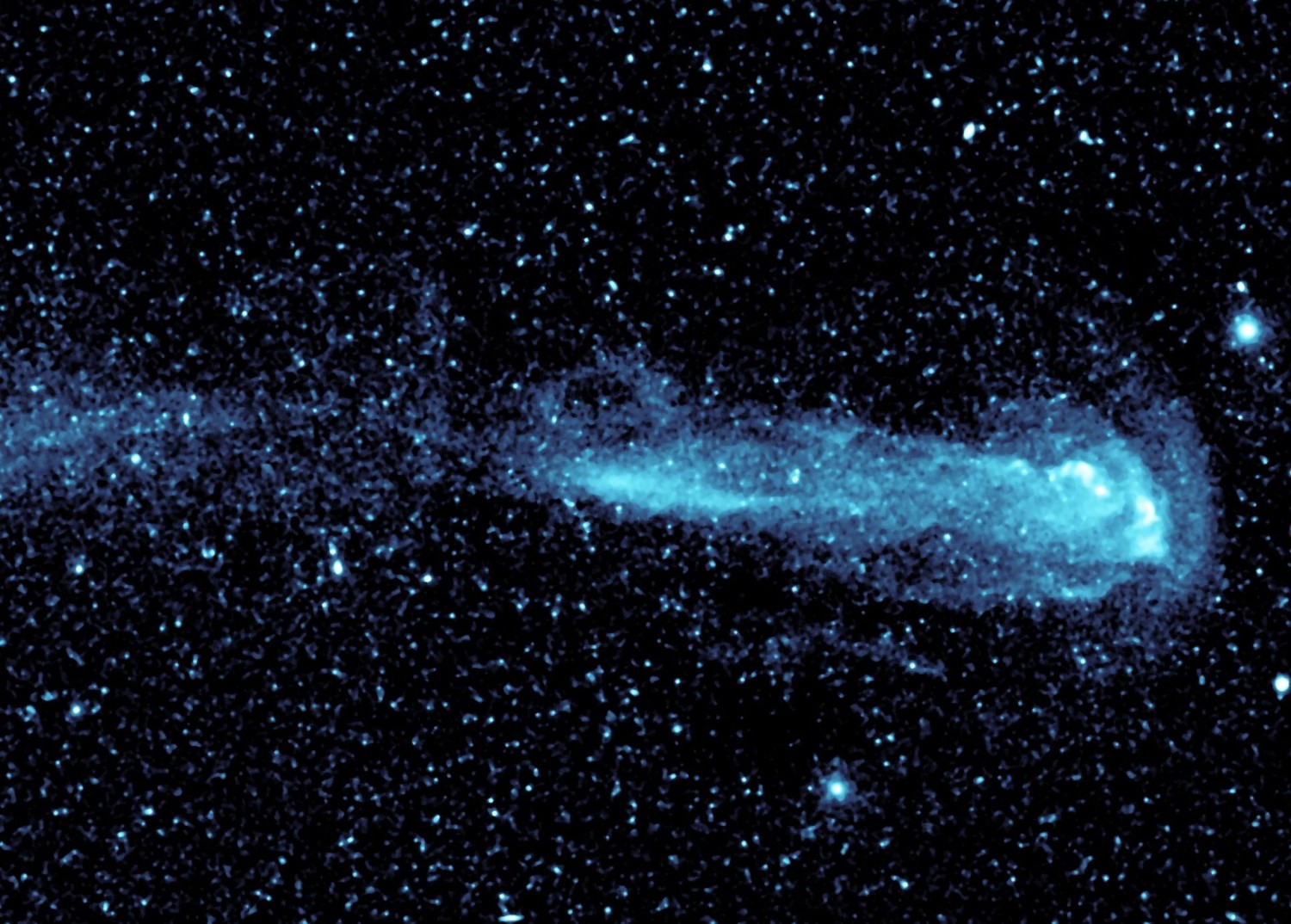 By the way, Mira was discovered in 2007 to have an amazing comet-like tail! A trail of blue cast across the heavens – discovered by astronomers using a space telescope – is is actually hot gas thrown off by Mira. The image above – an ultraviolet mosaic from NASA’s Galaxy Evolution Explorer – shows Mira’s tail. The large blue dot at left is a star that is closer to us than Mira. The star Mira appears as a small white dot in the bulb-shaped structure at right. Mira is moving from left to right in this view. Within Mira’s tail are “seeds” for new solar systems. That is, Mira is shedding material that will later be recycled into new stars and planets.

By the way, Mira’s comet-like tail stretches a startling 13 light-years across the sky.

Read more about this star’s comet-like tail from NASA.

Bottom line: In 2013, the sky’s most famous variable star – Mira the Wonderful – may be bright enough to be visible in July and August 2013. The chart in this post will help you identify it. In 2007, Mira was discovered to have a comet-like tail.

Menkar: Alpha star of the Whale