Venus is the bright object up at dawn in May 2011

This planet should be fairly easy to see throughout all of May, given an unobstructed eastern horizon. Just go outside and face the sunrise direction. Venus will be blazing away, far brighter than any star, though very low in the eastern twilight.

Rising time of the sun and Venus into your sky

If you have binoculars, bring them and search for other worlds at or near the threshold of visibility in the morning twilight: Mercury, Mars and Jupiter.

In the first part of May 2011, Venus is the only morning planet that’s easily visible to the unaided eye before sunrise. The planets Mercury, Mars and Jupiter lurk lower in the morning twilight, so they’re difficult to see, with or without binoculars.

Throughout May, Mars amd Jupiter are climbing away from the sunrise glare whereas Venus is falling into it. After May 7, Mercury starts to fall into the twilight glare as well. That means some great planetary conjunctions before sunrise in May!

Cool animation of May 2011 morning planets

Venus shares the same binocular field with Mercury until almost the end of May. Use Venus to see Mercury at its greatest morning elongation from the sun on May 7, 2011. As Venus and Mercury sink downward, they’ll meet up with Jupiter on May 11, and with Mars on May 22. Good chance that Jupiter will be visible to the unaided eye by the end of the first week in May. Mars, on the other hand, is struggling to climb out of the glare of dawn, so it probably won’t visible to the unaided eye until June.

Use Venus to see Mercury’s greatest morning elongation May 7 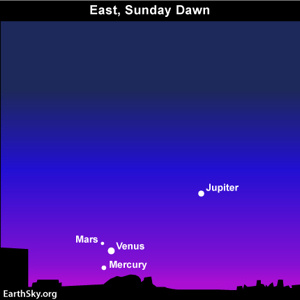 The red planet Mars climbs upward to meet up with Mercury and Venus before sunrise on Sunday, May 22

Watch for the spectacular pairing of Venus and Jupiter on May 10, 11 and 12. If you see another point of light other than Venus in the eastern dawn with the unaided eye, it’ll probably be Jupiter. After all, Jupiter ranks as the fourth brightest celestial object, after the sun, moon and Venus. As Jupiter swings upward by the day, Venus and Mercury sink downward, but all three group together inside the same binocular field from about May 7 to May 15.

Again, as Venus and Mercury sink downward, the red planet Mars climbs upward. Watch for the three to meet up for several days, centered on the morning of May 22.

Use Jupiter to find Venus/Mars pairing before sunrise

Wondering about Saturn? It’s the lone visible evening planet right now, shining from dusk till dawn. Throughout April, at morning dawn, the ringed planet Saturn sets in the west as the morning planets rise in the east.

Jupiter climbs upward in eastern dawn during May 2011

Give me five minutes, I’ll give you Saturn for 2011

All this month, Venus rises enough time before the sun, so that its brilliant light still gives grandeur to the May morning sky. Thereafter, Venus will shine lower in the east at dawn, and its appearance before sunrise will be even briefer throughout June and July. It will vanish in the morning twilight by July or August 2011.