Mercury waltzes with bright planets at dawn May 2011

Posted by Cecile LeBlanc in Astronomy Essentials | May 3, 2011

As Mercury reemerges as a morning object in May 2011, the solar system’s innermost planet will join up with the planets Jupiter, Venus and Mars in the eastern sky at dawn.

If you haven’t seen tiny Mercury before, or if you simply love to glimpse this most elusive of planets, you need to know whether it’s in the evening or morning sky. Mercury, the closest planet to the sun, is never far from the rising or setting sun. So the key to seeing Mercury is having an unobstructed view of the horizon in the sunrise or sunset direction, as Stefano De Rosa did when he took the rare image of Mercury below, on March 22, 2011, over the Alps.

See the faint speck in the upper left quadrant of this photo? It is Mercury farthest from the sunset glare on March 22, 2011, above the Alps. Image Credit: Stefano De Rosa

Evening apparitions of Mercury are always the best in the springtime, because the ecliptic – or path of the sun, moon and planets – is nearly perpendicular to the evening horizon on spring evenings. So Mercury’s best evening apparition of the year (for the northern hemisphere) was in March of 2011. If you missed Mercury’s March evening appearance, your next decent opportunity to catch Mercury in the evening sky will be in July 2011.

Mercury in morning sky in May 2011

Meanwhile, Mercury has swung to the morning sky, and now sits in the glow of dawn. The solar system’s innermost planet is climbing away from the sun’s glare day by day, and will reach its greatest morning elongation – farthest angular distance from the sun – on May 7. Therefore, the best morning view of Mercury will be for a few weeks, centered on May 7. Unfortunately, morning appartions of Mercury are not that favorable in springtime, because the ecliptic – the pathway of the sun, moon and planets – intersects the horizon at a shallow angle on spring mornings. 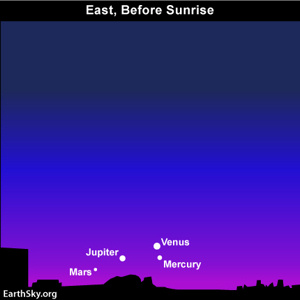 Mercury at its greatest morning elongation on Saturday, May 7, 2011. Use brilliant Venus to locate fainter Mercury

Mercury at greatest morning elongation on May 7

As Mercury reemerges as a morning planet in May, it’ll join Jupiter, Venus and Mars in the eastern sky at dawn. The view will be much better from the southern hemisphere, but, with some diligence, you can spot them from the northern hemisphere, too. The four planets will dance around the horizon in the early part of May, and, although it’ll be tough to spot the fainter ones (Mercury and Mars), the brighter planets (Jupiter and Venus) can help you find them. All four together will be very interesting to see, either in a super clear sky, or with binoculars.

Animation of morning planets in May 2011

Mercury makes a number of close passes with the other morning planets. Look for Mercury to be especially close to Venus, the sky’s brightest planet, on May 6, 7, 8 and 9. In fact, Mercury and Venus will fit inside the same binocular field of view till almost the end of the month. But that’s not all. Mercury will pair up with both Venus and Jupiter from about May 10 to May 16. Then Mercury and Venus will meet up with the red planet Mars for several mornings, starting around May 20. From the northern hemisphere, however, these planetary conjunctions take place in the glow of morning twilight, so have binoculars handy.

Venus is the bright object at dawn in May 2011

Jupiter climbs upward in eastern dawn during May 2011

Mercury and Venus orbit the sun inside of Earth’s orbit. As a result, these worlds exhibit phases like the moon. As they swing around the sun in their orbits, the telescope shows the illuminated part of either planet wax or get wider – then wane or get thinner. At present, both planets are waxing in the morning sky.

Mercury never lingers. Its quick 88-day orbit around the sun takes the planet out of the morning sky and back into the sun’s glare by June. Mercury will pass between the Earth and sun on June 12, 2011, and will reappear in the evening sky in late June.

Mercury will be back in the evening sky in July, but will not be as far above the sunset horizon as in March. Still, you should be able to spot Mercury in July with the unaided eye, in the west after sunset.

Mercury will reappear as a morning star for northern hemisphere viewers in late August and early September. Its November evening apparition will be its worst for the year; chances of seeing it then are slim. Then it’s back up before dawn after mid-December, 2011.

And now you might see why Mercury is called elusive. Some think it’s because Mercury is faint, but that’s not so. In fact, this planet is rather bright. But its 88-day orbit around the sun carries it in and out of view frequently, as it moves from the morning to evening sky and back again, always staying near the sunrise or sunset as seen from Earth. But every year brings good opportunities to see Mercury, and 2011 is no exception. In general, spring evenings and autumn predawns are always best!

Saturn is the lone evening planet in April 2011