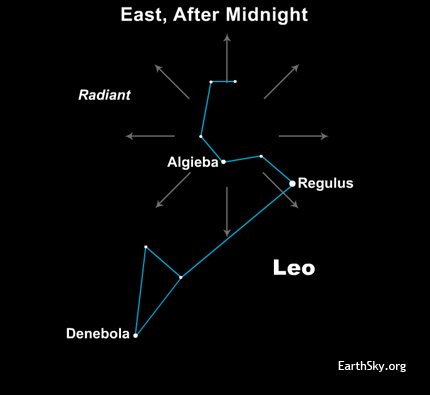 Watch for meteors in the annual Leonid meteor shower from midnight till dawn. In 2020, the new moon on November 15 guarantees darkness (from rural locations) for the next several nights. The peak number of meteors are expected to fall in the dark hours before dawn on Tuesday, November 17. You may see as many as 10 to 15 meteors per hour.

The Leonids are famous for storming at various times in recent history. The first great meteor storm of modern times was nearly 200 years ago; it was the Leonid shower of November 1833. That famous shower had a major effect on the development of the scientific study of meteors. It’s one reason the Leonids are so famous.

Previously, meteors were thought to be atmospheric phenomena, like rain or snow. But scientists were curious. Why was the 1833 shower so strong? In 1865, astronomers discovered a comet, which was named Comet Tempel-Tuttle for its discoverers. The comet’s orbit around the sun was found to be about 33 years. Some predicted that there would be another Leonid meteor storm in November 1866 – and so there was!

Thus the Leonid meteor storm of 1833 helped prove that meteors in annual shower originate in comets. 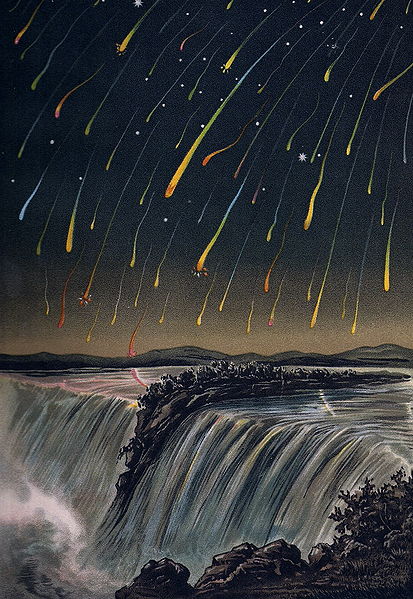 Leonid meteor storm, as seen over North America on the night of November 12-13, 1833. This woodcut was published in 1888 by E. Weib in his Bilderatlas der Sternenwelt (Illustrated Atlas of the Stars). Image via Wikimedia Commons.

Now we know that Earth crosses the orbital path of Comet Tempel-Tuttle every year. Debris from this comet burns up in the Earth’s upper atmosphere to create the annual Leonid shower. It’s only when the comet is near that we see a Leonid storm.

The illustration above depicts the 1833 Leonid meteor shower, said to have produced from 100,000 to 200,000 meteors per hour! This old woodcut, published in 1888, shows what the Leonid shower might look like in a year that this shower erupts into storm, bombarding the sky with hundreds of thousands of meteors.

That happened last in 1966, when North Americans enjoyed a Leonid storm numbering 100,000 shooting stars per hour. Since then, the Leonids have put on some stunning displays, but nothing to match the 1966 shower.

Will there be a Leonid storm in 2017? That’s one prediction we can make with a fair amount of certainty, and the answer is no. No storm or heightened meteor activity is anticipated for the Leonid meteor shower in 2017. That’s because the parent comet of the Leonid shower is not nearby.

The comet takes just over 33 years to orbit the sun. Its last perihelion (closest point to the sun) was February 28, 1998. Its next expected perihelion is May 20, 2031. So we’ve got awhile to wait for the next Leonid storm!

When they’re not storming, the Leonids are a modest, though reliable, shower. In a dark, moonless sky, you might see up to 10 to 15 meteors per hour. The absence of moonlight will undoubtedly enhance the view of this shower in 2017.

Even watching just one meteor flying across the sky can count as a big thrill. A good percentage of these swift-moving meteor leave persistent trains – glowing trails of ionized gas that last for a few moments are the meteor has gone!

On a dark night, we typically see the most Leonid meteors streaking the sky in the hour before before dawn because that’s when the constellation Leo the Lion – the radiant point of the shower – is found highest in the sky. In 2017, those wanting to make a night of it can observe Mars rising in the east around 3 a.m. local time, and then Jupiter and Venus coming up as the predawn darkness gives way to morning twilight. Click here for an almanac telling you when these planets will rise into your sky.

The planetary line-up shortly before sunrise November 18, 2017. Mars and Spica rise before dawn. Jupiter rises just as the predawn darkness is beginning to give way to morning twilight. Venus rises after dawn’s first light. Click here for an almanac.

Many ask about the radiant points of meteor showers. Please know that you don’t have to locate the radiant point to watch the Leonid shower, for these meteors fly all through the starry heavens. But it’s fun to know where the radiant lies in the sky. When tracing the paths of the Leonid meteors backward, they appear to radiate from the constellation Leo the Lion. Therefore, the meteors in this annual shower are named for this constellation. As seen from mid-northern latitudes, Leo rises over eastern horizon around 1 a.m. After rising, Leo then climbs upward and westward, soaring to its highest point in the southern sky around 6:30 a.m. local time.

Bottom line: On the night of November 17-18, find a dark sky away from pesky artificial lights, enjoy the comfort of a reclining lawn chair and sleeping bag, and enjoy watching the swift-moving and often bright Leonid meteor shower. The new moon on November 15 guarantees a dark sky.

Do you love stargazing? Order your EarthSky Planisphere today