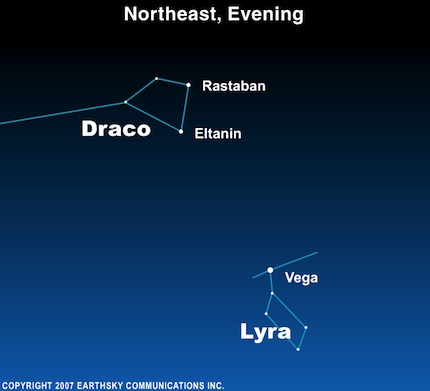 Tonight, find the Dragon’s Eyes. For years, I’ve glanced up in the north at this time of year and spied the two stars marked on today’s chart, Rastaban and Eltanin in the constellation Draco. They’re noticeable because they’re relatively bright and near each other. There’s always that split-second when I ask myself with some excitement what two stars are those? It’s then that my eyes drift to blue-white Vega nearby … and I know, by Vega’s nearness, that they are the stars Rastaban and Eltanin.

These two stars represent the fiery Eyes of the constellation Draco the Dragon. Moreover, these stars nearly mark the radiant point for the annual October Draconid meteor shower.

Because the stars stay fixed relative to each other, Vega is always near these stars. Vega, by the way, lodges at the apex of the Summer Triangle, a famous pattern consisting of three bright stars in three separate constellations, also prominent at this time of year. 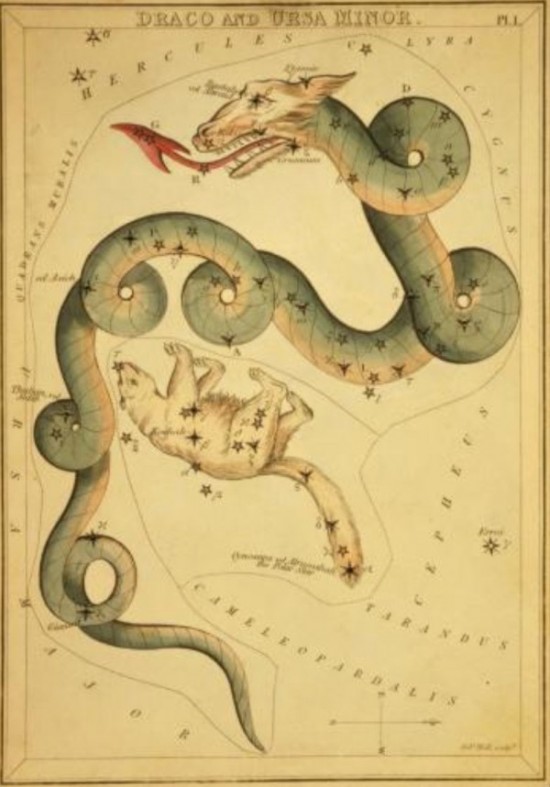 From tropical and subtropical latitudes in the Southern Hemisphere, the stars Rastaban and Eltanin shine quite low in the northern sky (below Vega). In either hemisphere, at all time zones, the Dragon’s eyes climb highest up in the sky around midnight (1 a.m. daylight saving time) in mid-June, 11 p.m. (midnight daylight saving time) in early July, and 9 p.m. (10 p.m. daylight saving time) in early August. But from temperate latitudes in the Southern Hemisphere (southern Australia and New Zealand), the Dragon’s eyes never climb above your horizon. However, you can catch the star Vega way low in your northern sky.

People at mid-northern latitudes get to view the Dragon’s eyes all night long!

Speaking of Rastaban and Eltanin, one of you asked:

The answer is that they’re just patterns of stars on the sky’s dome. The Greeks and Romans, for example, named them for their gods and goddesses, and also for many sorts of animals. In the 20th century, the International Astronomical Union (IAU) formalized the names and boundaries of the constellations. Now every star in the sky belongs to one or another constellation.

The stars within constellations aren’t connected, except in the mind’s eye of stargazers. The stars in general lie at vastly different distances from Earth. It’s by finding juxtaposed patterns on the sky’s dome that you’ll come to know the constellations, much as I identify Rastaban and Eltanin at this time of year by looking for the star Vega.

Read more: A Dragon and a former pole star

Bottom line: Look in the northeast on these June evenings, near the star Vega. You’ll see Rastaban and Eltanin, two stars that are bright and close together.