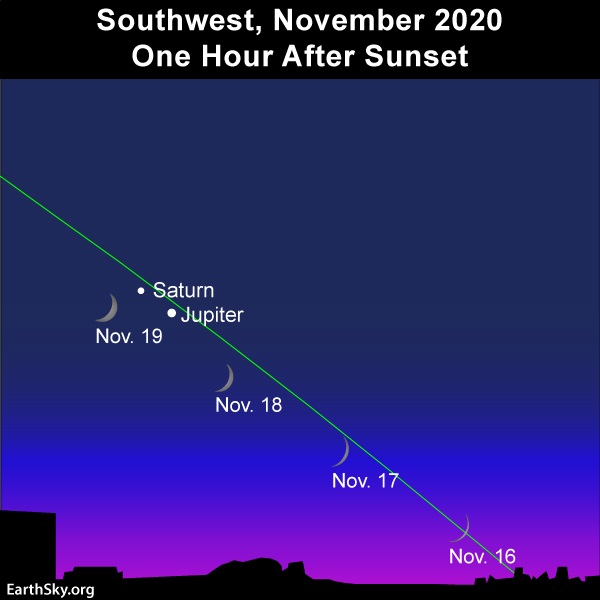 On November 16, 17, 18 and 19, 2020, the young moon in the evening sky – setting in the west not long after the sun – assures us of dark skies after midnight during this year’s Leonid meteor shower. Plus, by November 19, the moon will be near Jupiter and Saturn! It’s a great week for moon-watching in early evening, and meteor-watching after midnight.

The moon will set before the Leonid meteors begin to pick up steam in the middle of the night. The annual Leonid meteor shower is active from about November 6 to 30 each year. The 2020 peak is expected to fall on Tuesday morning, November 17. No meteor storm is expected this year: no sky full of meteors raining down from above, as has happened at various times in the past for this shower. In 2020, though, you might see as many as 10 to 15 meteors per hour in the wee hours of November 17. And you should see a sprinkling of Leonids on the mornings before and after that date.

Read: All you need to know about 2020’s Leonid meteor shower

Now about that waxing moon …

After sunset on November 16, 17, 18 and 19, you’ll find the moon waxing in the evening sky, sweeping past the bright planets Jupiter and Saturn. Jupiter and Saturn aren’t just bright, although Jupiter is the brightest starlike object in the evening sky, and Saturn is as bright as a 1st-magnitude star. Besides being bright, these two are also close together, making them very noticeable on our sky’s dome. Plus, they’re now creeping closer together in our sky, prior to their once-in-20-years great conjunction on the December solstice!

Wow! Right? Jupiter and Saturn are the planets to watch in the weeks ahead.

Will you spot the moon on November 16?

On November 16, it’ll be a whisker-thin moon in the west after sunset. The moon will set very shortly after the sun. New moon was November 15 at 05:07 UTC. At new moon, the moon and sun shared the same ecliptic longitude (233 degrees on November 15, 2020), and had a moon-sun elongation of 0 degrees. In other words, at new moon, the sun and moon were in nearly the same place in the sky, so the moon’s dark nighttime side faced Earth, while the moon’s illuminated daytime side faced the sun.

Why no eclipse every new moon?

After new moon, as the moon moves in orbit, it shifts its location with respect to the sun. One day after new moon, careful observers might spot the young moon in the west after sunset. Generally, it’s tough to spot a young moon that’s less than 24 hours old (24 hours after new moon). Fortunately, from virtually everywhere worldwide, the moon will be over 24 hours old at sunset November 16, 2020. Look for the slender moon to sit near the western horizon after sunset on November 16. From many places worldwide, the moon will set below the horizon before nightfall.

Want to know when the moon sets in your sky? We recommend a number of almanacs.

All else being equal, the Southern Hemisphere has the advantage over the Northern Hemisphere for catching the November young moon. For example, let’s take Heraklion, the capital of Crete, and Port Elizabeth, South Africa, which are nearly on the same meridian of longitude (26 degrees east longitude). Heraklion resides at 35 degrees north latitude, whereas Port Elizabeth lodges at 34 degrees south latitude. On Monday, November 16, 2020, the moon sets 70 minutes after the sun in Heraklion, but 100 minutes after sunset in Port Elizabeth. 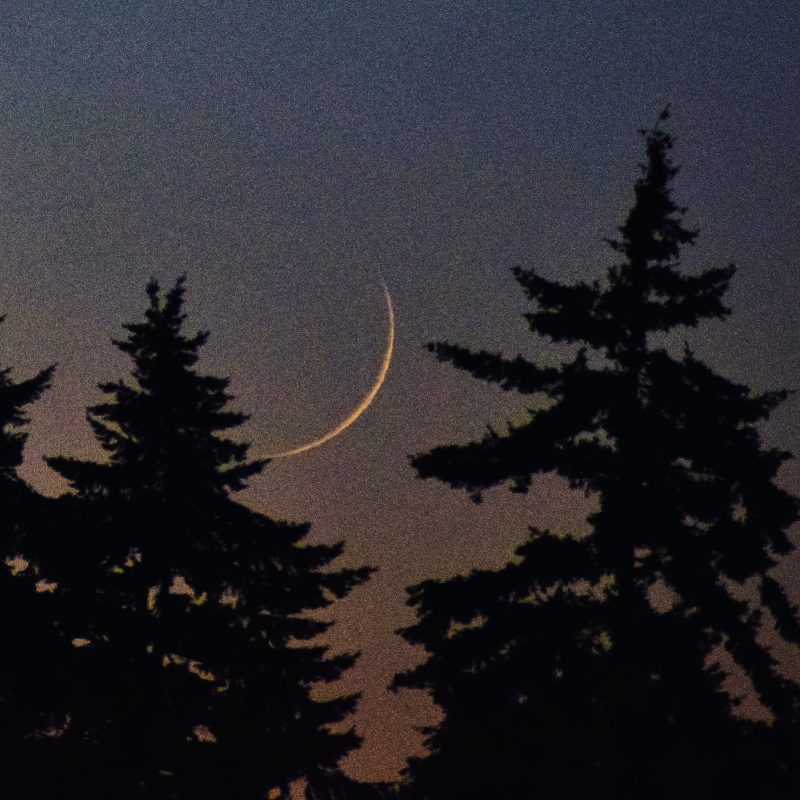 Day by day, after November 16, 2020, a wider crescent moon will grace the western sky. Each day it’ll be higher up in the sky after sunset than the day before, and it’ll stay out longer after dark. Day by day, a larger portion of the moon’s near side will become illuminated by daylight while the moon’s far side – invisible from Earth – will slide into the shadow of night.

When the full moon comes rolling around on the night of November 29-30, 2020, all of the moon’s daytime side will face Earth, its disk 100% illuminated in sunshine.

Watch for earthshine lighting up the young moon’s dark side. Earthshine is twice-reflected sunlight; sunlight bounces from Earth to the moon, and the moon reflects it back to Earth.

Enjoy moon-watching and the meteor shower this week! 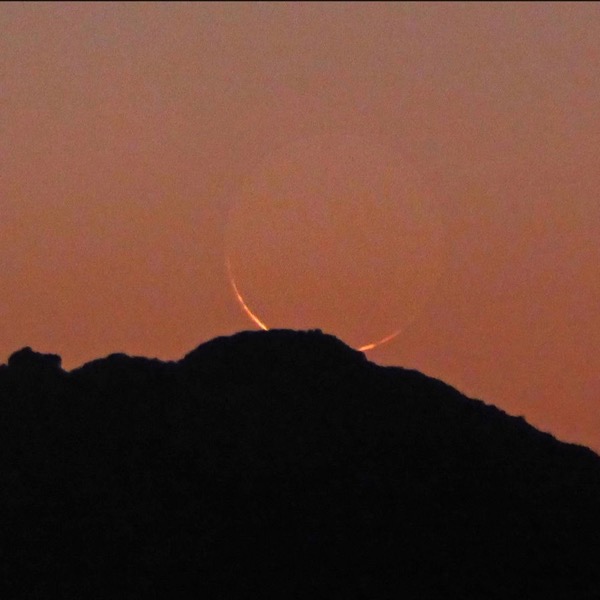 Peter Lowenstein of Mutare, Zimbabwe, caught the young moon, with its dark side all aglow in earthshine, after sunset September 29, 2019.

Bottom line: These next several evenings – November 16, 17, 18 and 19, 2020 – enjoy the beautiful presence of a young waxing crescent moon covered over in earthshine. The moon will set well before midnight, when the Leonid meteors will begin revving up for the night. Expect the meteors’ peak morning to come on November 17. Have fun!