Will you catch Mercury at dawn?

Mercury will be over 18 degrees west of the sun – that is, visible in our eastern sky before sunrise – all this upcoming week, from about August 7 to 14, 2019. With Mercury getting brighter by the day, you might it before sunrise for the next 2 weeks at northerly latitudes.

The photo above – by Radu Anghel in Bacau, Romania – shows our sun’s innermost planet Mercury after sunset in February 2019. Although it’s intrinsically a bright object, Mercury often appears as this photo shows it, in a sky washed with twilight colors. Seeing it often requires a search. On the other hand, for much of every year, Mercury is lost in the glare of the sun, not visible at all. It’s only at opportune times, when Mercury nears or reaches its greatest elongation (maximum angular separation) from the sun on the sky’s dome, that it’s possible to catch Mercury at its highest above the sunset or sunrise. Now is such a time.

In early August – as viewed from around Earth’s globe – Mercury appears in the east before sunrise. On August 9, 2019, Mercury will reach its greatest elongation of 19 degrees west of the sun. Given clear skies, there’s a good chance that you’ll see Mercury with the eye alone, for this world is a bright as a 1st-magnitude star.

Mercury will be over 18 degrees west of the sun all this upcoming week, from August 7 to 14. The amount of time that Mercury rises before the sun, however, depends on your latitude, with the Northern Hemisphere enjoying the advantage. We give the rising times for various latitudes below, but please keep in mind that these times presume a level horizon.

Looking things over, it appears that the opportunity for catching Mercury in the morning sky stays roughly the same throughout the week, especially at northerly latitudes. However, the one thing these rising times don’t tell you is that Mercury is actually brightening day by day. This world will be some 2 1/2 times brighter on August 14 than it appeared on August 7. By August 20, Mercury will be nearly 5 times brighter than it was on August 7. Moreover, from 40 degrees north latitude, Mercury will still rise 1 1/4 hours before the sun on August 20, so this world still may be visible on that date from northerly latitudes. 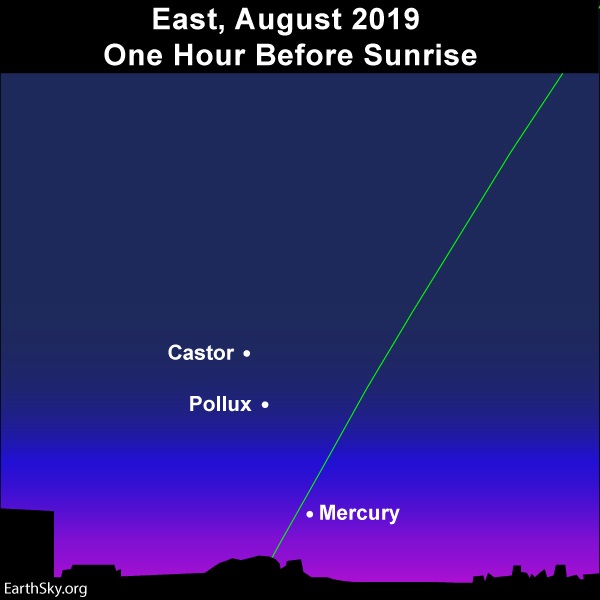 On or near August 11, 2019, the planet Mercury will line up with the Gemini stars, Castor and Pollux. They’ll be pointing to Mercury and can help you find it. Appreciably before that date, by the way, Mercury will be found to the west (right) of the Castor-Pollux line.

Given that Mercury is getting brighter by the day, you may be able to catch Mercury before sunrise for the next two weeks at northerly latitudes. Mercury brightens in our sky whenever this world waxes in phase. Mercury’s disk is about 30 percent illuminated by sunshine on August 7, yet about 80 percent illuminated on August 20. Although you need a telescope to see Mercury’s phase, its waxing phase nonetheless increases this world’s overall brightness to the unaided eye.

For the next couple of weeks, try to catch Mercury as the predawn darkness is giving way to dawn. To maximize your chances of catching Mercury, which looks like a star to the naked eye, find an unobstructed horizon in the direction of sunrise.

View larger. | Here are the year’s apparitions of Mercury compared: 3 swings out from the neighborhood of the sun into the evening sky (gray) and 3 into the morning sky (blue). The top figures are the maximum elongations – maximum apparent distance from the sun – reached at the top dates given beneath. Curving lines show the altitude of the planet above the horizon at sunrise or sunset, for latitude 40 degrees north (thick line) and 35 degrees south (thin), with maxima reached at the parenthesized dates below (40 degrees north bold). Chart via Guy Ottewell’s blog.

Bottom line: Mercury will be over 18 degrees west of the sun – that is, visible in our eastern sky before sunrise – all this upcoming week, from about August 7 to 14, 2019. With Mercury getting brighter by the day, you might see it before sunrise for the next two weeks at latitudes in the Northern Hemisphere.