Total eclipse of year’s closest supermoon on May 26 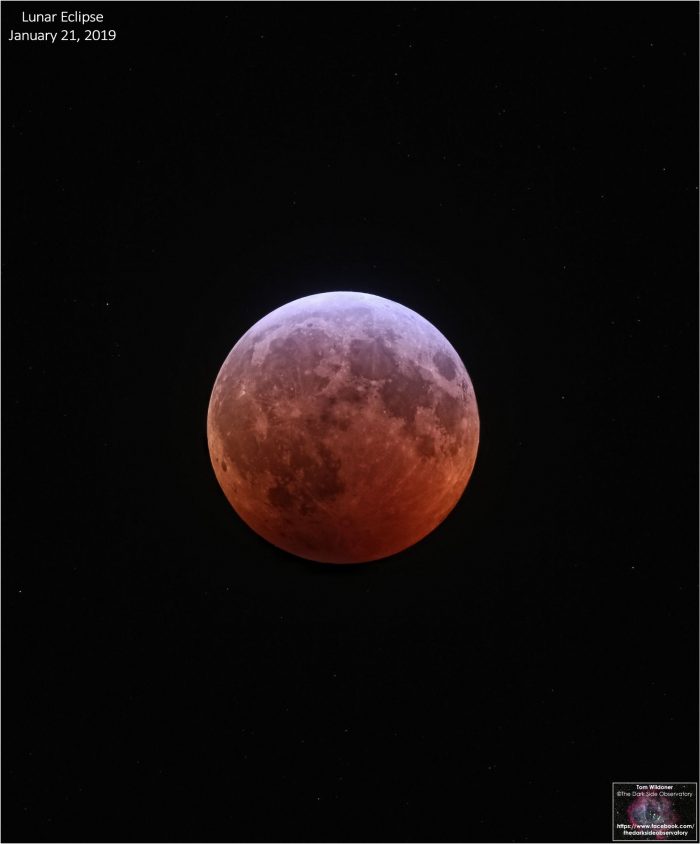 Above photo: The last time we had a total eclipse of the moon was nearly 2 1/2 years ago, on January 21, 2019. Tom Wildoner captured this image of this total lunar eclipse from Weatherly, Pennsylvania. Thank you Tom!

On May 26, 2021, the full moon sweeps through the Earth’s dark umbral shadow to stage a short-lived total eclipse of the moon. Although totality lasts for less than 15 minutes, a partial umbral eclipse precedes and then follows totality by nearly 1 1/2 hours each time. So, from start to finish, the moon takes a little over three hours to cross the Earth’s dark shadow.

This May full moon counts as the closest (and therefore the biggest) full moon of the year. Some people may call it a supermoon. A total eclipse of the year’s closest full moon last occurred on September 28, 2015.

This total lunar eclipse is visible from western North America, southern and far-western South America, the Pacific Ocean, New Zealand, Australia and southeast Asia. From the Americas, this eclipse takes place in the early morning hours before sunrise May 26; whereas from the world’s Eastern Hemisphere (New Zealand, Australia and southeast Asia), the eclipse occurs in the evening hours after sunset May 26. The worldwide map below helps to explain: 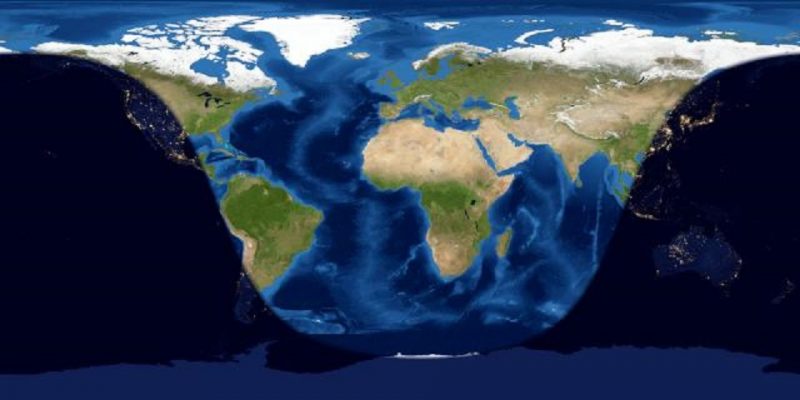 The day and night sides of Earth at mid-eclipse or greatest eclipse (May 26 at 11:19 UTC). The shadow line at left (running through North and South America) depicts sunrise (moonset) May 26, whereas the shadow at right (running across Asia), represents sunset (moonrise) May 26. You have to be on the nighttime side of Earth to see the moon at mid-eclipse (greatest eclipse).

Find out the eclipse times for your part of the world via TimeandDate, remembering to place your city in the lookup box.

We give the eclipse times first in UTC (Coordinated Universal Time) and then in local time for U.S. time zones: 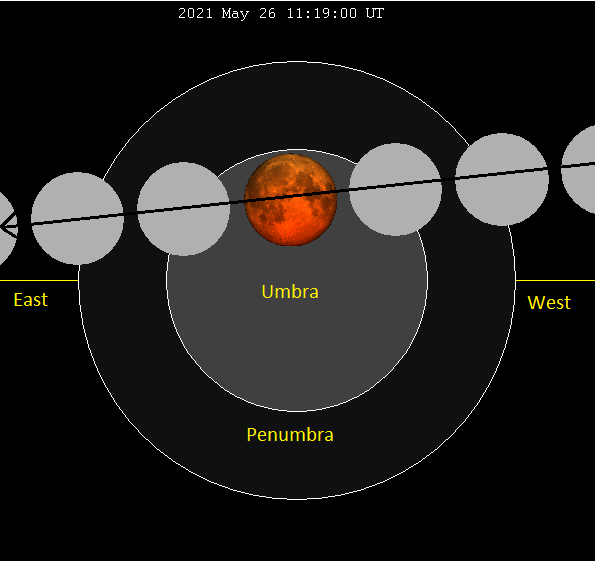 Why such a short total lunar eclipse?

Yet, the total lunar eclipse on May 26, 2021, doesn’t make a perfect alignment, either. In fact, this May 2021 full moon doesn’t even cross the center of the Earth’s shadow. This full moon is about as far as it can get from the center of the Earth’s shadow, and still be totally eclipsed. That’s why this total eclipse lasts for short period of time, or less than 15 minutes.

The more closely that the full moon’s center aligns with the center of the Earth’s shadow, the deeper and longer the total eclipse. On July 27, 2018, the alignment between full moon and Earth’s shadow was almost perfect, to produce the longest total lunar eclipse of the 21st century (2001 to 2100). This total eclipse lasted for 1 hour and 43 minutes, or nearly 1 1/2 hours longer than the May 16, 2021 eclipse.

Although the total lunar eclipse on May 26, 2021, is a rather shallow one, it’s the only total lunar eclipse to occur in the year 2021, and the first to take place since January 21, 2019. Enjoy the grand natural attraction while the time is at hand!