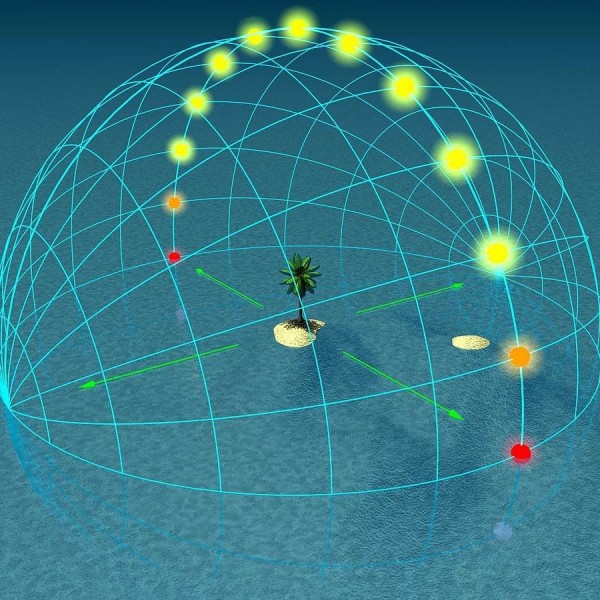 The illustration at top by Tau’olunga via Wikimedia Commons shows the day arc of the sun, every hour – during the equinoxes – as seen on the celestial dome from the equator. It also shows twilight suns down to -18 degrees latitude. Note the sun is at the zenith at noon and that the tree’s shadow is cast straight down. That is – as seen from the equator on the day of an equinox – a tree stands in the center of its own shadow.

That’s the meaning of an equinox. The September equinox sun crosses the sky’s equator, going from north to south.

On the day of the equinox, the sun pretty much rises due east and sets due west all over the world, with everyone worldwide receiving approximately equal portions of day and night.

After the equinox, the sun (and migrating birds) will continue to travel southward to the southern climes. Arctic sea ice will begin to freeze; Antarctic ice will start melting. The great wheel of the seasons will continue to turn.

Try to watch as the sun rises due east and sets due west on the day of the equinox. If you do that from your backyard, or deck, or a local park – somewhere that you have familiar landmarks – you’ll gain a handy tool for astronomy: that is, the tool of knowing the direction of due east.

Bottom line: Around the equinox, the sun is overhead at noon for people at Earth’s equator.

Read more: Everything you need to know about the September equinox 2020