In late November and early December, look west in the evening for the Summer Triangle. It’s the signature star formation of our Northern Hemisphere summer, but you can see it in northern autumn, too. The Summer Triangle showcases three brilliant stars – Vega, Deneb and Altair – in three separate constellations.

What’s more, the Summer Triangle will continue to shine after dark throughout December and even into January. Look for it tonight at early evening, high in your western sky.

As the Summer Triangle sinks close the western horizon around mid-evening, turn around to see Orion – the signpost constellation of winter – rising in the east. 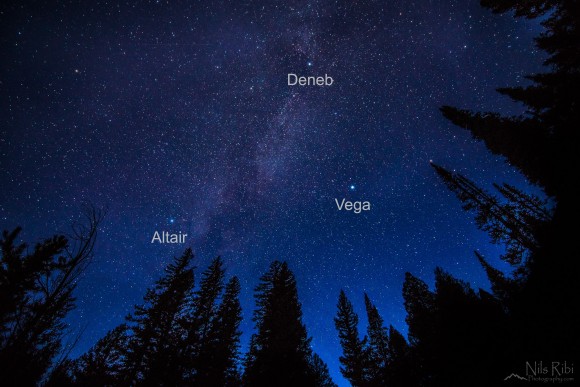 Nils Ribi caught this photo of the Summer Triangle in November 2014.

Bottom line: Look westward this evening for the three brilliant stars of the humongous Summer Triangle: Vega, Deneb and Altair.