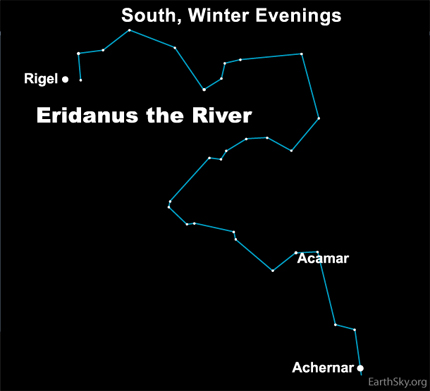 The chart above is almost like our chart from January 30. But we’ve changed our observing location. Normally, our charts are set for the geographical center of the continental U.S. – say, the latitude of Wichita, Kansas (at about the 37th parallel north). The chart above is set to the extreme southern U.S. or similar latitudes around the world (say, the latitude of Miami, at about the 25th parallel north).

Travel much north of the 25th parallel, and you can’t see Achernar, although it’s the ninth brightest star in the night sky. Too far north, and Achernar never climbs above your southern horizon.

If that’s you, and you’re in the northern United States or Canada, or a similar latitude, you can still see the constellation Eridanus the River. But the River drops out of sight, below your southern horizon, before Achernar appears, as illustrated on the chart below. 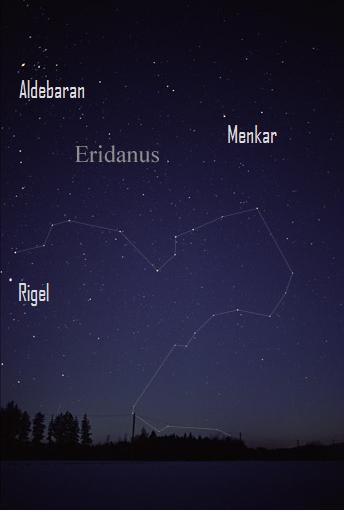 If you live at a mid-northern latitude, you can see only a portion of the constellation Eridanus. Notice that, on this chart set for a higher latitude, the star Achernar doesn’t appear.

On the other hand, if you’re at a southerly latitude in the Northern Hemisphere – maybe along the Texas/Mexico border, or in the Florida Keys, or from the latitude of some great cities around the world including Miami in the U.S., Taipei in Taiwan, Abu Dhabi in the United Arab Emirates, or Muscat in Oman – you can see Achernar for a brief time each year. From the latitude of these cities (about 25 degrees north), the bottom part of constellation Eridanus the River may be seen just above the southern horizon.

It’s from this latitude, or farther south on Earth’s globe, that you can see Achernar, the famous star that marks the end of the constellation Eridanus the River.

Achernar is very bright. It’s a beautiful star and a stunning end to the constellation Eridanus. To see it well, though, you’d want to be in Earth’s Southern Hemisphere, where Achernar sweeps high in the sky.

Achernar makes only a tiny arc above the southern horizon from the southern U.S., so you have to be looking at just the right time to see it – for example, at nightfall and early evening in late January or early February.

That’s Achernar, the star at the end of the River. If you see it, you’ll never forget it! 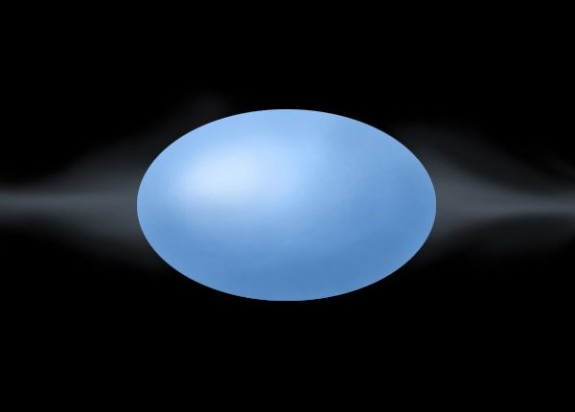 Bottom line: In the January and February evening sky – if you’re in the extreme southern U.S., or farther south – you can see the star Achernar, the end of the River in the constellation Eridanus.