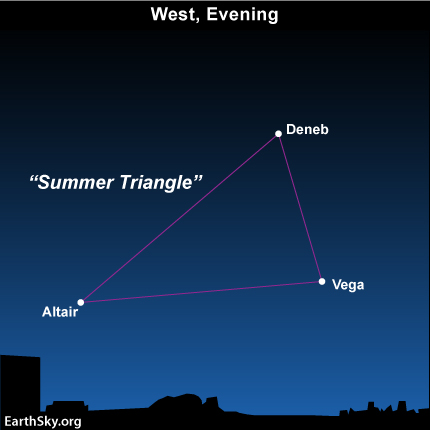 Tonight – December 22, 2017 – or any evening soon, look in the west shortly after sunset to find a famous asterism. An asterism isn’t a constellation. It’s a noticeable pattern of stars, in this case, the one known to us in the Northern Hemisphere as the Summer Triangle.

Good chance that you’ll be able to see these three brilliant stars.

Summer Triangle in northern winter? Sure. It’s called the summer triangle, because – for us in the Northern Hemisphere – summer is the season in which these stars are out from dusk until dawn.

Still, if you look for this pattern this month, you’ll find that, around the time of the winter solstice and the New Year, the Summer Triangle is descending in the west in early evening. It’s getting closer each evening to disappearing into the sunset glare.

How long into winter will you be able to see the Summer Triangle in your evening sky?

Thank you! Your submission has been received!
Oops! Something went wrong while submitting the form.
END_OF_DOCUMENT_TOKEN_TO_BE_REPLACED