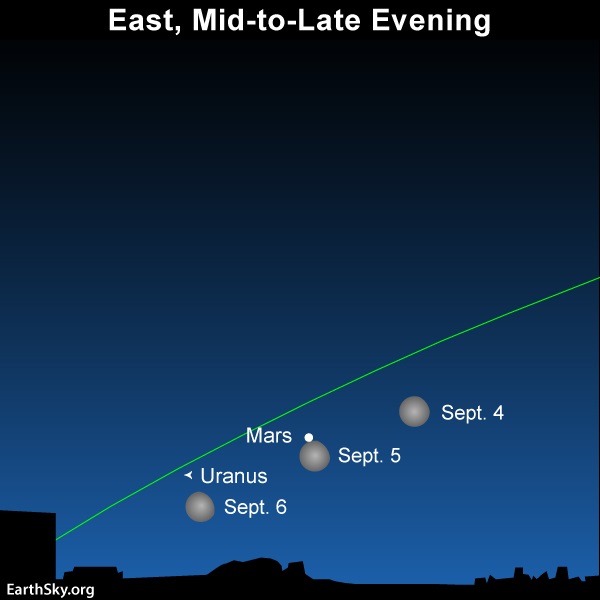 Mars is the planet to watch this month and next! Earth will pass between Mars and the sun in October, and the planet is now very bright and very red. Don’t miss the moon’s sweep past the Red Planet around September 4, 5 and 6, 2020. The moon can help you identify Mars now so that you can enjoy it in the weeks to come.

For a month or so – centered around mid-October 2020 – Mars will be even brighter than Jupiter. Currently, Mars is the 5th-brightest celestial object to light up the sky, after the sun, moon, Venus and Jupiter, respectively. However, Mars is brightening by the day, and by late September, will match Jupiter in brilliance. When Mars shines at its brightest for the year – in mid-October – it’ll be some 1 1/3 times brighter than Jupiter.

Around September 4-6, 2020, the moon is in waning gibbous phase. The moon and red planet Mars rise into your eastern sky several hours after sunset. They should be up by mid-evening, by around 9 to 10 p.m. local time, the time on your clock no matter where you are on the globe. If you have an obstructed eastern horizon, it could be a little later. Once they’re up, these two worlds will be out for rest of the night. Want a specific view from your location? Try Stellarium.

For the fun of it, we show Uranus on the chart above, too. It’s theoretically visible to the eye, but requires a very dark sky – and no nearby moon – to be seen. Click here for a chart showing Uranus’ location in front of the stars. You probably won’t see this faint and distant planet without an optical aid. People with good vision, and a good knowledge of Uranus’ place in the heavens, can spot Uranus as a dim speck of light on a dark, moonless night.

Jupiter and Saturn are both bright and noticeable for their nearness to each other. They climb highest up for the night around nightfall throughout September 2020.

Every month, as the moon journeys full circle in front of the constellations of the zodiac, the moon sweeps by every solar system planet.

The chart below shows who can see this occultation of Mars. 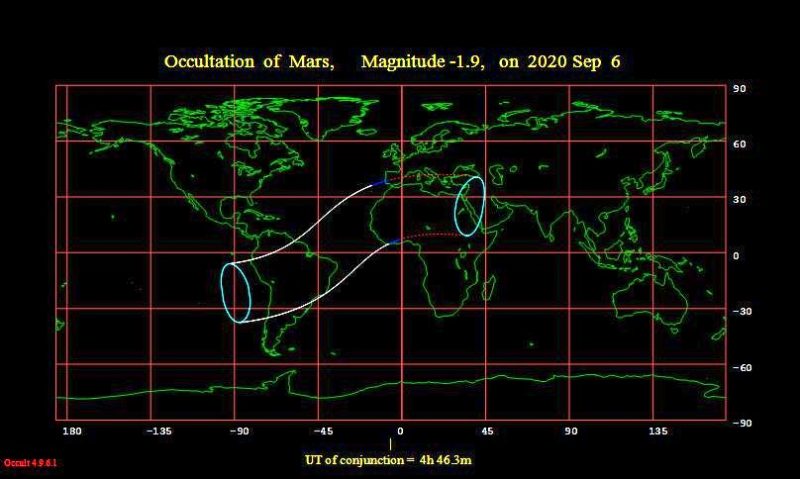 The occultation times are given at this IOTA (Internationa Occultation Timing Association) page in Universal Time (UTC), which you must covert to your local clock time. We give the occultation times in local time for Rio de Janeiro, Brazil (UTC-3 hours), and La Paz, Bolivia (UTC-4 hours): 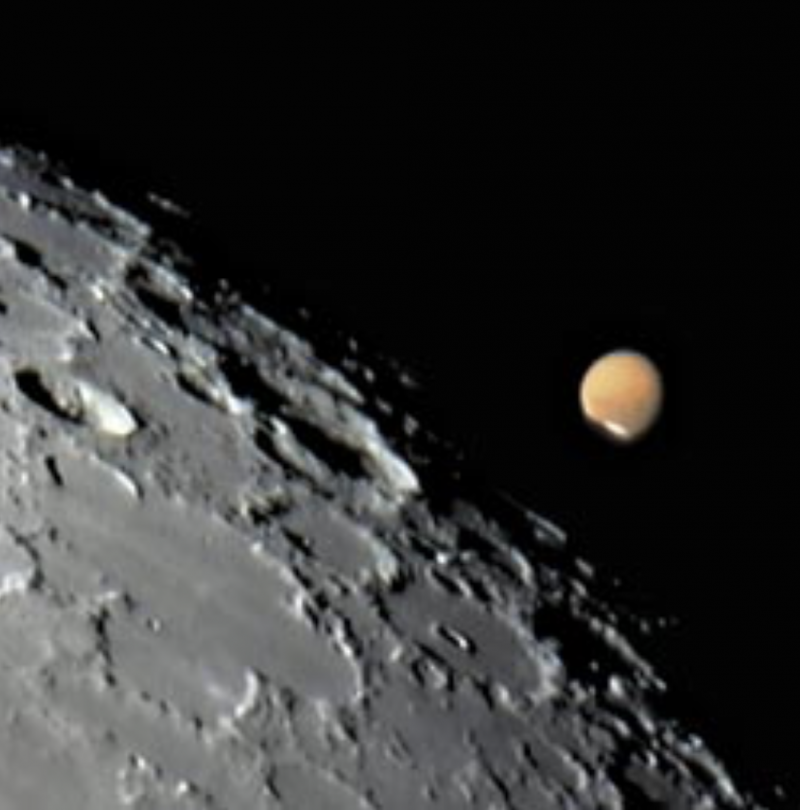 July 17, 2003 occultation of Mars by the moon as captured by Andrew Chaikin in central Florida. Image via Andrew Chaikin/ SkyandTelescope.com.

Bottom line: These next several nights – September 4, 5 and 6, 2020 – let the moon introduce you to the red planet Mars. We will pass between Mars and the sun in October 2020, when Mars will supplant Jupiter as the sky’s 4th-brightest heavenly body.