See all 5 bright planets in February 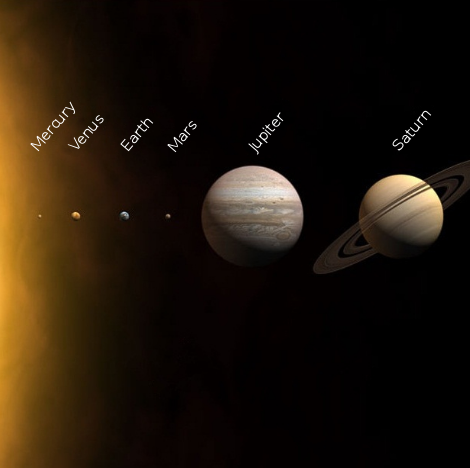 Spot the two evening planets – Venus and Mercury – in the west not long after the sun goes down. Then see the three morning planets – Mars, Jupiter and Saturn – in the east before daybreak. 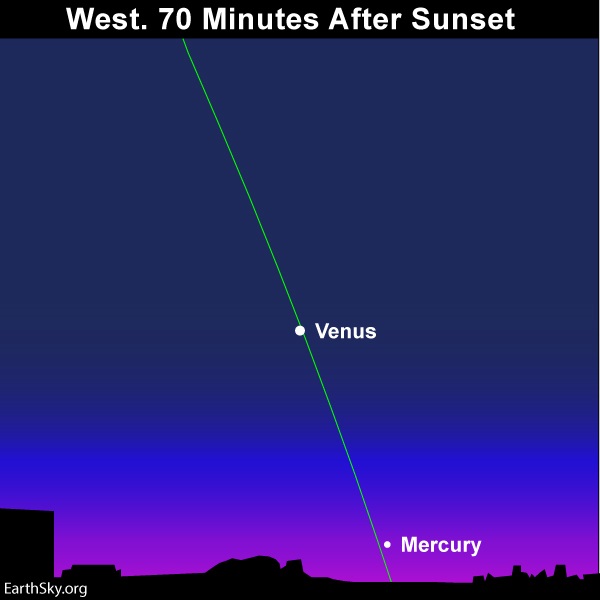 By bright planet, we mean any solar system planet that’s easily visible without optical aid and that’s been watched since time immemorial. There are 5 of them: Mercury, Venus, Mars, Jupiter, Saturn. Two planets are in the west after sunset now. Venus is a very bright object – brightest thing up there – in the western twilight sky. Mercury is fainter and below Venus. Don’t wait too long to view Mercury! It’ll quickly follow the sun below the western horizon.

You’ll easily spot dazzling Venus, the sky’s brightest planet, popping out some 30 to 45 minutes (or sooner) after sunset. If you’re blessed with good eyesight, you might actually see Venus as soon as the sun sets. Some people even see it in daytime! Venus beams as the third-brightest celestial object to light up the sky, after the sun and moon.

Once you spot Venus, watch for Mercury to appear beneath Venus and close to the horizon as dusk deepens into darkness. If you have binoculars, you can catch Mercury (or Venus) even sooner after sundown.

Now is the best time to catch Mercury after sunset. Mercury reaches its greatest elongation from the setting sun on February 10, 2020. At present, it shines more brilliantly than a 1st-magnitude star (but, remember, super-brilliant Venus outshines Mercury by some 30 times). After greatest elongation on the 10th, swift-moving Mercury will begin falling sunward. It’ll also begin dimming, from our earthly perspective. The innermost planet will become lost in the sun’s glare after about mid-February.

We give you the approximate setting time for Mercury at various latitudes:

Want more specific information? Find out when the planets set in your sky at TimeandDate.com.

Now for the morning planets … 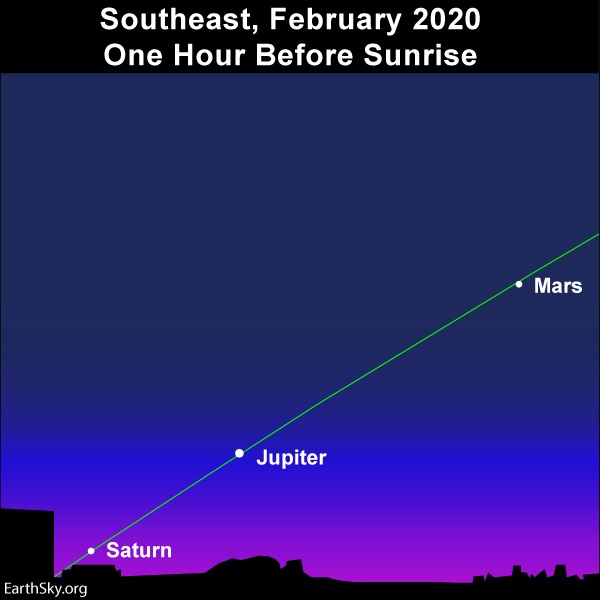 To see the remaining 3 planets, you’ll have to get up early. Look east! A string of planets – Mars, Jupiter and Saturn – beautifies the February morning sky. Jupiter is much brighter than Mars or Saturn; you’ll surely spot it first. Mars may be noticeable for its reddish color. And Saturn is near the sunrise. Notice that a line between Mars and Jupiter points to Saturn.

During the predawn/dawn hours at this time of year, the tilt of the ecliptic favors the Southern Hemisphere for watching the morning planets – Mars, Jupiter and Saturn. Given an unobstructed horizon in the direction of sunrise, though, almost everyone worldwide (except far-northern latitudes, such as in Alaska) should be able to spot both Mars and Jupiter before dawn (about 90 minutes before sunrise). From far-northern latitudes, it’ll take much more of an effort to spot Saturn before sunrise than at more southerly latitudes. Keep in mind that an imaginary line drawn from Mars and past Jupiter points to Saturn’s place near the horizon. Binoculars will be helpful for those living at northerly outposts, where Saturn must contend with the glow of dawn.

We give you the approximate rising time for Saturn at various latitudes:

Want more specific information? Find out when the planets rise in your sky at TimeandDate.com.

If you miss Saturn in the next few mornings, don’t fret. Saturn, which is as bright as a 1st-magnitude star, will be rising earlier and earlier all month long. Just keep watching for it. You’ll spot Saturn before sunrise some morning soon.

Bottom line: Find all 5 bright planets in February 2020. Use Venus to find Mercury after sunset, and then look for Saturn in line with Mars and Jupiter in the morning sky.