The five bright solar system planets, in their outward order from the sun, are Mercury, Venus, (Earth), Mars, Jupiter and Saturn. Four of these five planets are in display in August 2020. Mercury, the lone exception, is nominally a morning planet until mid-August, at which juncture it’ll transition over to the evening sky.

Two gas giant planets come out out first thing at dusk/nightfall: Jupiter and Saturn. Jupiter, the brighter of these two worlds, ranks as the 4th-brightest celestial body in all the heavens, after the sun, moon and the planet Venus. But there’s no way to mistake Jupiter for Venus in the evening sky, because Venus is only out during the predawn/dawn hours. 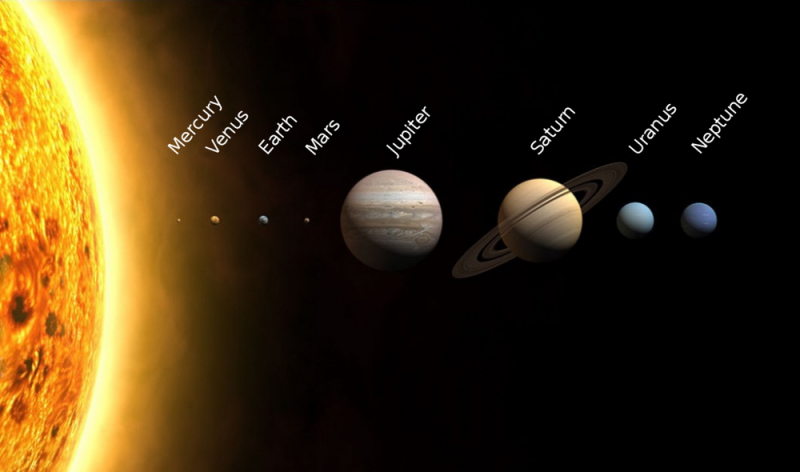 There’s no way to mistake Jupiter for nearby Saturn in the evening sky, either. Although Saturn is easily as bright as a 1st-magnitude star, the king Jupiter outshines the ringed planet Saturn by a good 14 times. With a modest backyard telescope, you can readily see Saturn’s rings and Jupiter’s four major moons: Io, Europa, Ganymede and Callisto.

Both Jupiter and Saturn reside in front of the constellation Sagittarius, and will continue to do so till nearly the end of the year. If you’re blessed with a dark sky, look at “The Teapot” star pattern in the western half of the constellation Sagittarius. The Teapot lodges to the west of these Jupiter and Saturn throughout 2020.

Depending where you live worldwide, the red planet Mars will rise over your eastern horizon by mid-to-late evening. If you’re not one to stay up late, get up early to view Mars much higher up the predawn/dawn sky. Mars, though not as bright as Jupiter and Venus, beams more brilliantly than most any star in the starry heavens. Mars is brightening by the day and will actually outshine Jupiter by October 2020.

The moon, in its monthly trip through the constellations of the zodiac, is moving toward Mars as we speak, and will be joining up with Mars on the sky’s dome during the weekend. If you can’t find Mars otherwise, let the waning moon guide you for several days, centered on or near August 9. 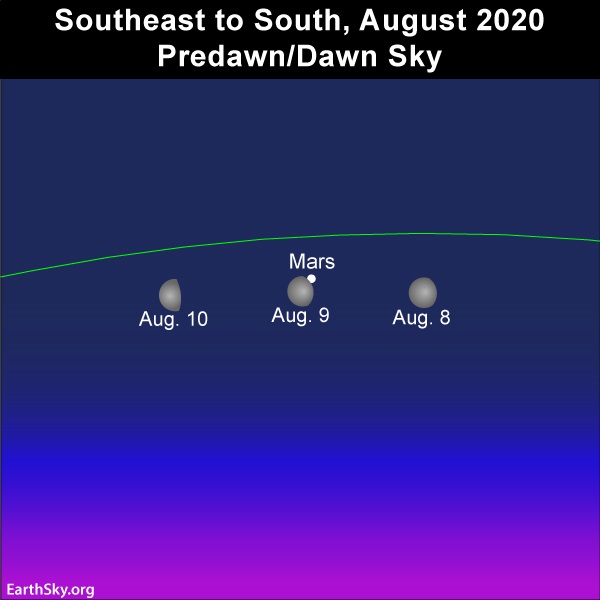 If you’re more of an early bird than a night owl, look for the moon and Mars much higher up in the predawn/dawn sky. Note: the moon appears larger on the sky chart than it does in the real sky.

In the wee hours before dawn, you’ll have a chance to see Jupiter and Venus in the same sky together. The queen planet Venus rises before the king planet Jupiter sets, as seen from almost everywhere worldwide. But you’ll need an unobstructed horizon both east and west. Jupiter will be sitting low in the west, directly opposite of Venus when she rises in the east.

Live in the US or Canada? Find out when Venus rises and Jupiter sets via Farmer’s Almanac

For virtually anyplace worldwide, find out when Venus rises and Jupiter sets via TimeandDate

Venus and Mars will both be easy to view in the predawn/dawn sky, whether you catch Jupiter before it sets or not. You simply can’t miss Venus because it’s the 3rd-brightest heavenly body to light up the sky after the sun and moon. Should you have any doubt whether it’s Venus that you’re looking at or not, let the moon confirm it for you, as the queen of the night sky meets up with the queen planet in mid-August 2020! 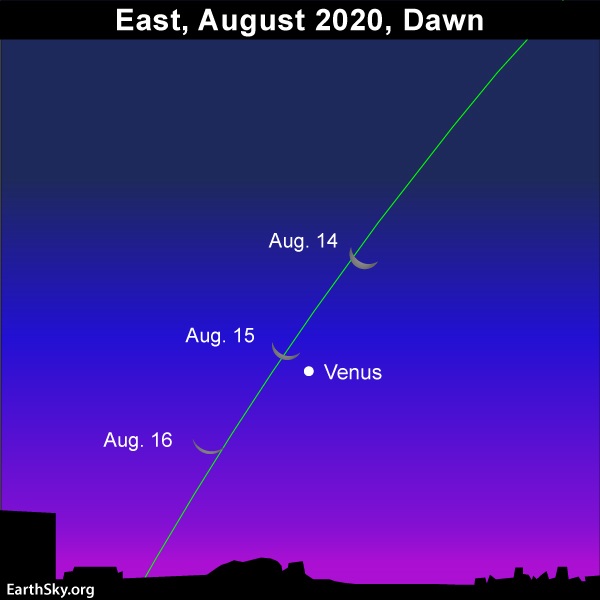 It’ll be worth getting up for, as the waning crescent moon rendezvous with the queen planet Venus on the sky’s dome. Read more.

August 2020 presents a fine time to view four of the five bright planets. Best of all, you don’t have to stay out all night long to enjoy their company. Jupiter and Saturn pop out first thing after sunset, and stay out almost all night long. Then before sunrise, enjoy an eyeful of Mars and Venus in the predawn/dawn sky.