Northern Crown near dusk and dawn

Tonight, or any November evening … at nightfall and early evening, as seen from northerly latitudes, the bowl-shaped constellation Corona Borealis, the Northern Crown, shines to the lower right of the star Vega. You’ll find it close to your western horizon. Can you spot brilliant Vega shining rather high in the western sky at nightfall? It can guide you to the Northern Crown. If need be, binoculars can help you see the NOrthern Crown on this moonlit evening.

You’ll need a dark sky to see the Northern Crown, which is a glittery semicircle of stars. See the pattern of The Keystone in Hercules? It lies between Vega and the Northern Crown. So you would be star-hopping from Vega, to the Keystone, to the Crown.

The Alpha star, or brightest star, in the Northern Crown is called by two names: it can be either Alphecca or Gemma. The star name Gemma means “bright one of the dish.”

The Micmac Indians living in southeastern Canada see this C-shaped configuration as the Bear’s Den, the home of Celestial Bear. For a few weeks at this time of year, Corona Borealis (the Bear’s Den) is seen in the western sky after dusk – and then, in the eastern sky before dawn. This double feature announces the coming of hibernation season.

Meanwhile, the Pawnee of the Great America Plains called Corona Borealis the Circle of Chiefs, noting that this star formation and the Pleiades star cluster trade places in the sky in about 12 hours. 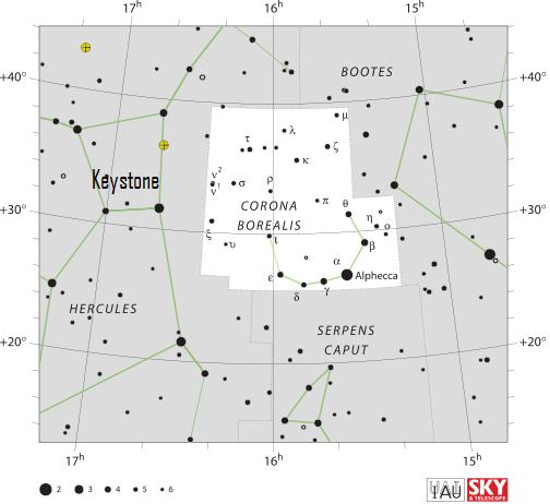 Bottom line: Look for Corona Borealis, the Northern Crown, low in the west before it sets this evening and low in the east before dawn tomorrow.

Thank you! Your submission has been received!
Oops! Something went wrong while submitting the form.
END_OF_DOCUMENT_TOKEN_TO_BE_REPLACED