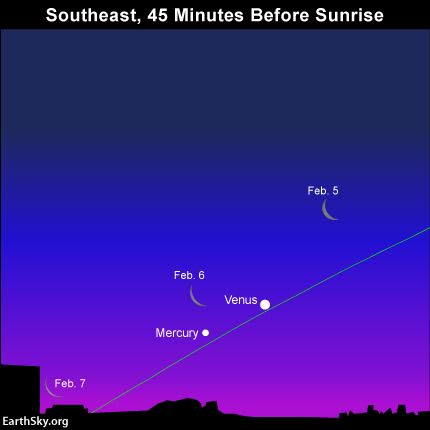 Before dawn tomorrow – February 5, 2016 – and for the next few mornings, a wondrous scene awaits you in the morning sky. The waning crescent moon and planet Venus beam close together before sunrise. Since the moon and Venus rank as the second-brightest and third-brightest celestial bodies, respectively, after the sun, you should have little trouble catching them at morning dawn.

Mercury is also visible near the moon, closer to the sunrise than the moon and Venus.

And of course, that’s not all. There are five planets visible before dawn now. The moon has been passing each one in turn. Now it’s Venus and Mercury’s turn.

It might be a challenge to catch Mercury beneath the moon and Venus before sunrise these next few mornings. Although Mercury is plenty bright, shining on par with the sky’s brightest stars, this planet’s luster is somewhat tarnished by the emerging morning twilight.

Try using the moon and Venus to locate Mercury near the horizon, starting around 80 to 70 minutes before sunrise. (Start your Mercury search even sooner, if you live in the Southern Hemisphere.) The lit side of the waning crescent moon moon will point, more or less, in the direction of Mercury. If you still can’t see Mercury, it might be because there’s haze or fog on your horizon. In that case, binoculars will come in handy.

The opportunity to see all five visible planets in the same sky together will last for about another two weeks. Get up 90 minutes (or more) before sunrise to see the planets Saturn, Mars and Jupiter to the west of Venus. Then look for Mercury beneath Venus as darkness gives way to dawn.

See 5 naked-eye planets at once!

The five visible planets will adorn the February morning sky until around February 20. In their order of brilliance, the morning planets are Venus, Jupiter, Mercury, Saturn and Mars. In their order going from east (sunrise direction) to west (sunset direction), they are Mercury, Venus, Saturn, Mars and Jupiter.

Bottom line: Look for the waning crescent moon near the planet Venus on the mornings of February 5, 6 and 7, 2016. Then look for Mercury below Venus and near the horizon as darkness starts to give way to dawn. This post contains info about all five planets visible now before dawn.

Thank you! Your submission has been received!
Oops! Something went wrong while submitting the form.
END_OF_DOCUMENT_TOKEN_TO_BE_REPLACED