See 5 bright planets at once

First time we can see 5 planets at once since 2005. All 5 are up before dawn, still, and all 5 will remain visible until Mercury disappears in the dawn just after mid-February. 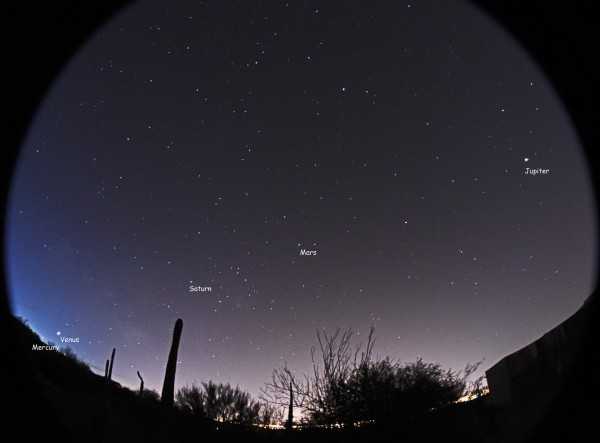 Since late January, and through mid-February, 5 bright planets are visible at once in the predawn sky. This image is from February 8, 2016. It’s by Eliot Herman in Tucson, Arizona. View on Flickr.

UPDATE February 8, 2016. The new moon comes to pass on February 8, 2016, at which juncture the moon transitions from the morning to evening sky. Many people around the world witnessed the moon sweeping by all five visible (naked-eye) planets from late January until February 7, 2016. See the chart below. But you still can see all these planets together in the morning sky for at least another week. Read on.

Get up 80 minutes or more before sunrise to view four of the five naked-eye worlds. These planets form a well-defined arc across the predawn/dawn sky from east to west: Venus, Saturn Mars and Jupiter. Venus, the brightest planet, sits low in the southeast, and is your ticket to locating Mercury, the solar system’s innermost planet. Draw an imaginary line from Saturn through Venus to locate Mercury near the horizon an hour or so before sunrise. Binoculars could come in handy.

From about February 11 to 15, Venus and Mercury will be close enough together on the sky’s dome to fit – or nearly fit – into the same binocular field. After mid-month, Mercury will probably be difficult to catch from mid-northern latitudes. From the Southern Hemisphere, you might be able to spot Mercury in the morning sky till nearly the end of the month. All five planets will be yours to behold as long as Mercury remains in the morning sky.

See it! Photos of the 5 planets before dawn 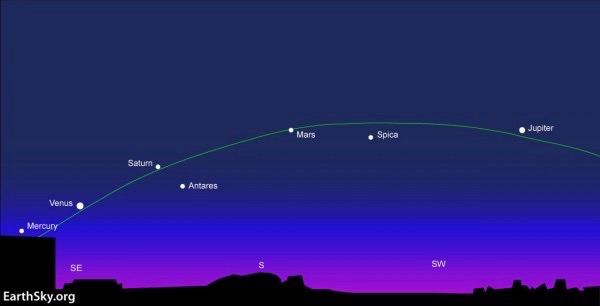 As seen from the N. Hemisphere, the 5 planets arc across the southern sky, shortly before dawn.

By bright or visible planet, we mean any planet in our own solar system that’s easily viewed without an optical aid and that has been watched by our ancestors since time immemorial.

See photos of the 5 planets, from the EarthSky community

In their outward order from the sun, the five bright planets are Mercury, Venus, Mars, Jupiter and Saturn. These planets are easily seen in our sky because they are relatively nearby. Their disks reflect sunlight and shine with a steadier light than the distant, twinkling stars.

You can catch most of these planets long before dawn. Jupiter rises first, in the evening hours, followed by Mars after midnight and then Saturn, Venus and Mercury. Click here for recommended almanacs that will help you find when each planet rises into your sky for any given date.

Relative distances of the planets to the sun

When will we see all five planets together again? 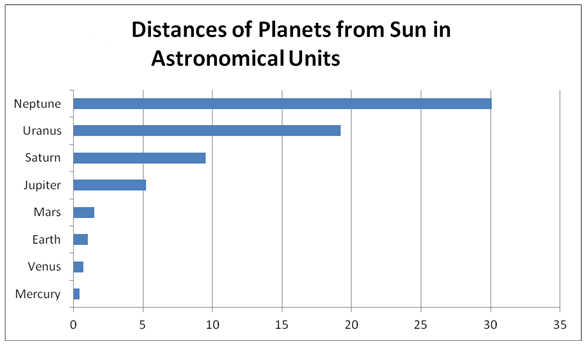 Relative distances of the planets to the sun. These distances are expressed in astronomical units (AUs, or sun-Earth units):

If you want to find out the distances of the solar system planets from the Earth and sun right now, click here. 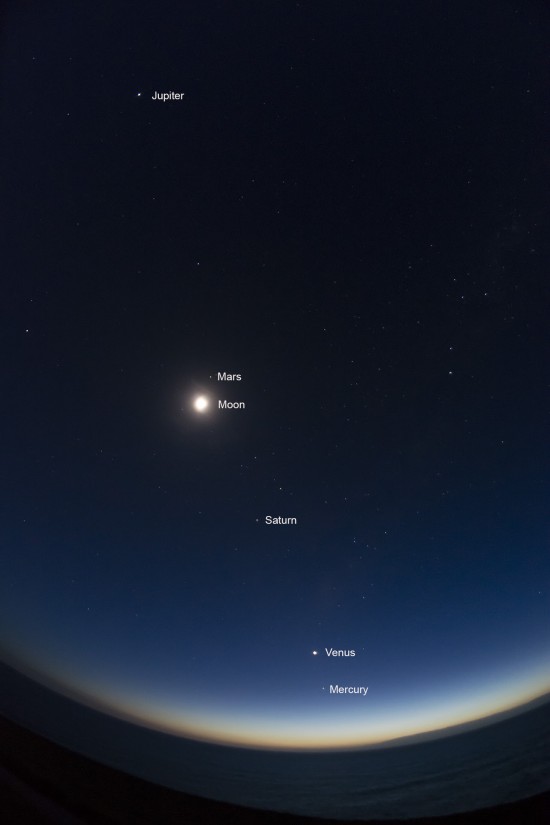 The 5 planets can be seen from around the world. Their orientation to the horizon is different from one part of Earth to another. Denis Crute in Australia caught the 5 planets and the moon from the Southern Hemisphere on February 2, 2016.

When will we see all five planets together again? We’ve had a number of people ask us when the next presentation of the five visible planets in the same sky will take place. It will be possible to view all five in the evening sky – very briefly – from about August 13 to 19, 2016.

There’s a huge caveat, however. Right now, all five planets are strung out across the early morning sky in an easy-to-see way (well, Mercury is the tough one, so close to the sunrise, but keep watching … it’ll get easier). In August, Mercury and Venus will be sitting low in the west at dusk and not that easy to catch from northerly latitudes.

The Southern Hemisphere definitely has the big advantage for spotting all five planets in the August, 2016, evening sky.

Bottom line: All five bright planets – Mercury, Venus, Mars, Jupiter and Saturn – appear together in the morning sky from about January 20 to February 20, 2016. We haven’t seen all five together since 2005.