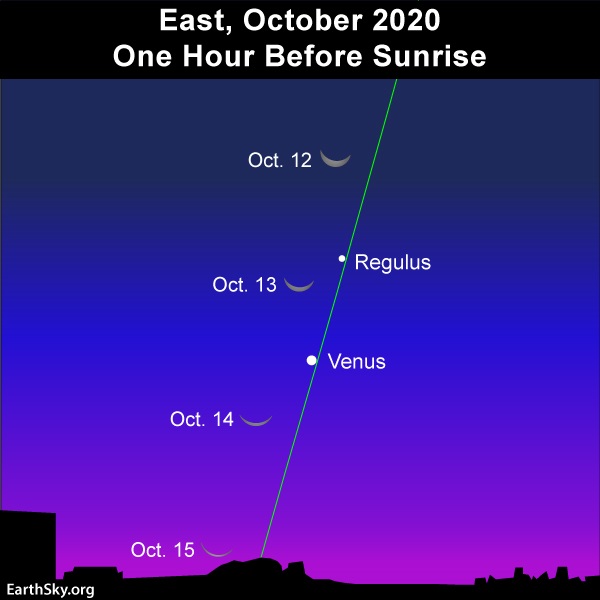 What better way to start out the day than to enjoy the waning crescent moon and dazzling planet Venus before sunrise? You might also spot Regulus, the brightest star in the constellation Leo the Lion, up before the sun. Although Regulus is a 1st-magnitude star, or one of the brightest stars in our sky, Leo’s brightest star pales next to Venus. Brilliant Venus outshines Regulus by well over 100 times. Watch these three objects – the moon, dazzling Venus and bright Regulus – adorning the morning dawn on October 12, 13, 14 and 15, 2020. Simply get up before daybreak, and look eastward.

The moon and Venus are nearby objects in our own solar system, shining by reflecting the light of our local star, the sun. Meanwhile, Regulus shines with its own light and is, in truth, a vastly more powerful object than either the moon or Venus, shining across some 79 light-years of space. It just doesn’t look as bright in our sky because it’s so far away. This mighty star is considerably larger and hotter than our sun. If it were located at the sun’s distance from us, Regulus would appear some 150 times brighter than our sun in the visible spectrum.

Did you know that Venus goes through the whole range of phases like our moon? However, you need a telescope to see the phases of Venus. You might think that the moon and Venus should show a similar phase when the moon swings to the north of Venus. After all, these two worlds will nearly reside on the same line of sight. But no, their phases aren’t even close. Venus now exhibits a waxing gibbous phase (over 75% illuminated), while the moon will display a waning crescent phase (about 11.5% illuminated on the morning of October 13).

The reason for this disparity is that the moon orbits Earth while Venus orbits the sun. When Galileo first looked at Venus through the telescope in the early 1600s, he noted Venus’ changing phases. Venus’ phases revealed to Galileo that Venus orbits the sun, not Earth (as was commonly believed in Galileo’s day). This revelation gave impetus to the possibility of a sun-centered solar system.

Bottom line: Watch for the moon, Venus and the bright star Regulus in the constellation Leo the Lion, as they beautify the eastern sky before sunup on October 12, 13, 14 and 15, 2020!