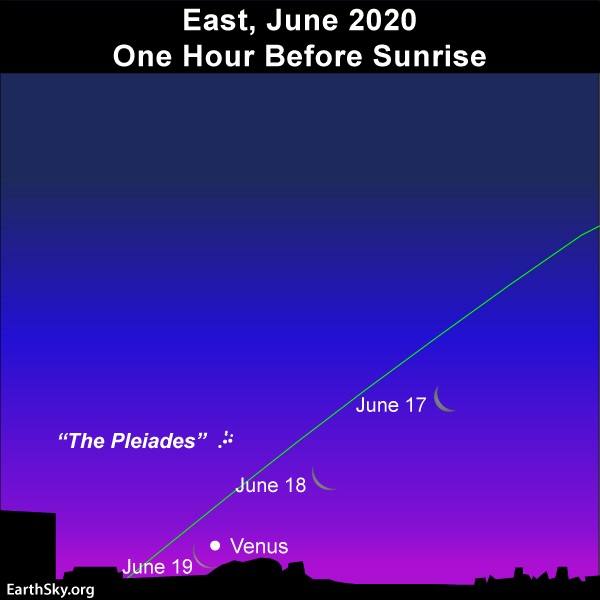 Before sunrise on June 17, 18 and 19, 2020, look for the waning crescent moon near Venus, the brightest planet. Venus is just now emerging from the dawn glare. A less-bright planet wouldn’t be visible so close to the sun, but Venus is exceedingly bright. It’ll be beautiful set against the brightening sky. You might – or might not – spot the Pleiades star cluster before Venus rises into your sky. This dipper-shaped cluster of stars is also just returning to the morning sky. From some parts of the globe, the moon will occult (cover over) Venus on June 19. More about the June 19 occultation of Venus by the moon later in this post.

In another week or two, both Venus and the Pleiades will be much easier to spot in a predawn sky. For now, let the moon guide you to them. The moon’s illuminated side will be pointing right at Venus on the mornings of June 17 and 18. Both will be ascending over your eastern horizon just as the morning darkness is giving way to dawn.

On June 19, look for the very old and very slender moon to be quite close to Venus on the sky’s dome. If you see the moon on June 19, but not Venus, that might be because Venus is behind the moon! 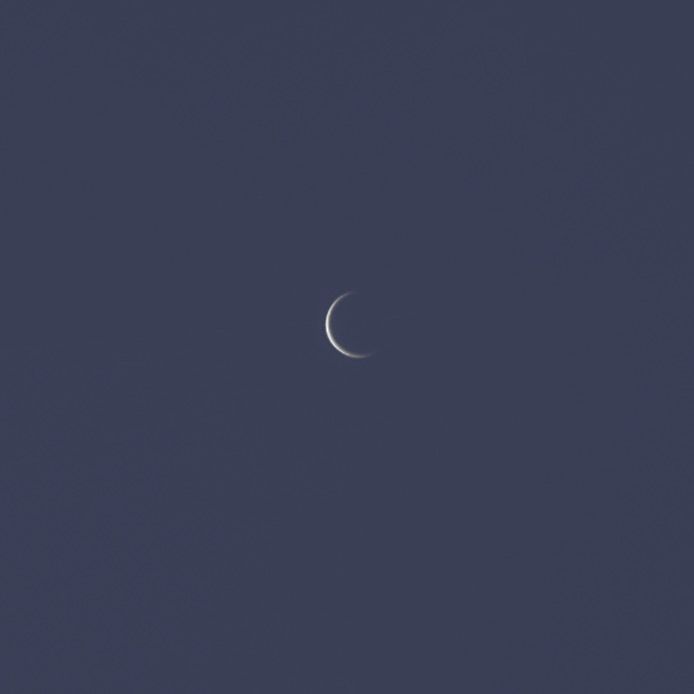 View at EarthSky Community Photos. | The planet Venus was bright in our evening sky in recent months, but it reached inferior conjunction – passing between us and the sun – on June 3. Now, this bright planet is in the east before sunrise. Those with telescopes will find Venus in a waxing crescent phase. Steven Bellavia of Mattituck, New York, caught the crescent Venus through a telescope, in daylight, only 5 days after its inferior conjunction. He wrote: “Venus, 0.9% illuminated, around noon on June 8.” Thank you, Steven!

We provide the approximate rising time for Venus at various latitudes (given an absolutely level horizon in the direction of sunrise):

Venus transitioned from the evening to morning sky on June 3. That’s when it passed between the Earth and sun at inferior conjunction. Now, Venus sits low in the east at dawn. Generally, when a planet or bright star lurks this low in the glow of morning twilight, it isn’t easily visible, if visible at all.

But dazzling Venus ranks as the third-brightest celestial object to light up the sky, after the sun and moon, respectively. So if you have a clear sky and unobstructed horizon, you will likely see Venus with the unaided eye some 60 to 45 minutes before sunrise. If your sky conditions aren’t great – or trees or buildings block your view to the east – just wait. Venus is now ascending in the east before sunup. It’ll come into view for you in that part of the sky soon. 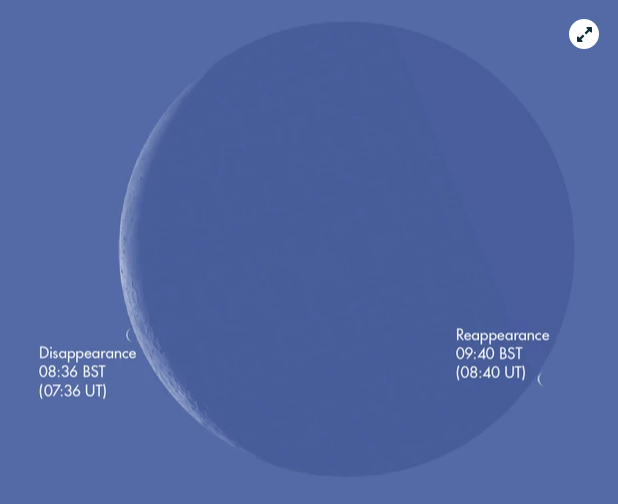 Daytime occultation of Venus by a crescent moon on June 19, 2020. Times are for the United Kingdom. Image via Pete Lawrence.

Occultation of Venus on June 19. The waning crescent moon is taking aim at the planet Venus as we speak. Relative to the backdrop stars and planets of the zodiac, the moon travels about 1/2 degree (the moon’s own angular diameter) eastward per hour, or about 13 degrees eastward per day. On June 18, a thinner waning crescent moon will be closer to Venus on the sky’s dome than on June 17. Then, on June 19, an even slenderer crescent will meet up with the queen planet, to showcase a close conjunction of nighttime’s two brightest heavenly bodies: the moon and Venus.

On June 19, if you’re at just the right place worldwide, you can watch the moon occult (cover over) Venus, though the event will be taking place almost exclusively in a daytime sky. You’ll probably need binoculars or a telescope to witness the occultation. Venus disappears beneath the moon’s illuminated side and then reappears from behind the moon’s dark side an hour or so later. Use care if using an optical aid, as the moon and Venus won’t be that far from the sun. For your safety, and to enhance the view, have someone block out the sun with an umbrella or some such thing, but otherwise providing an open view of the moon and Venus.

Here in the most of the United States (excepting the extreme northeast U.S.), at dawn on June 19, by the time the moon rises, the occultation will already be over. Thus we’ll see the moon to the east (sunrise side) of Venus. We’ll see Venus exceedingly close to the moon, on the side of the moon that appears darkened and perhaps illuminated by earthshine.

Some people in northeastern North America (Northeast United States and Maritime Provinces of Canada), at dawn June 19, may see the moon – but not Venus – because the moon will be covering Venus and hiding this world from view. 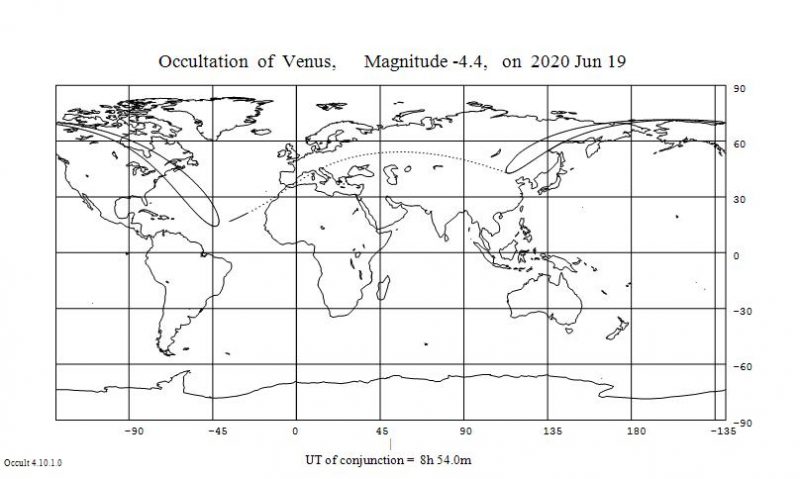 North (above) the dotted curve (Greenland, northwestern Europe and northern Asia) has the June 19th occultation of Venus in a daytime sky. At the far west (left) of the occultation viewing area (northeast North America), the occultation takes place at dawn. Worldwide map via International Occultation Timing Association (IOTA).

From Greenland, northwestern Europe and northern Asia (Russia and Mongolia), this lunar occultation of Venus takes place during the daytime hours on June 19, 2020.

Click on this IOTA page to find out the occultation times in Universal Time (UTC) for your part of the world. You must convert Universal Time to your local time.

Bottom line: In the predawn/dawn sky on June 17, 18 and 19, 2020, the waning crescent moon will appear near the brightest planet Venus. For some on June 19, the moon will be visible, but not Venus; the planet will be behind the moon.