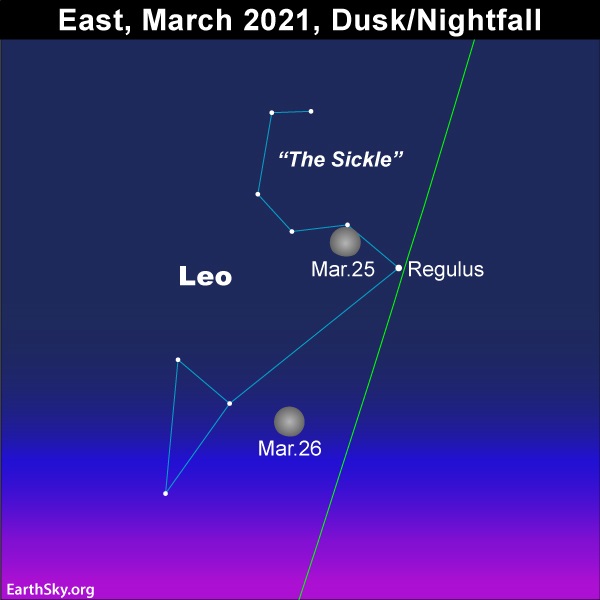 On March 25, 2021, the moon is moving through the constellation Leo the Lion, past Regulus, Leo’s brightest star. This star, sometimes called Cor Leonis, represents the Lion’s Heart. Until nearly the end of the month, the moon’s glare will bleach out the Lion’s stars. But you’ll likely see Regulus, which is a 1st-magnitude star, that is, one of our sky’s brightest stars.

And you might – or might not – glimpse the pattern of stars of which Regulus is a part. This backward question mark pattern is a famous asterism within Leo, called The Sickle.

In another week, the moon will drop out of the evening sky, allowing you to view the Lion in all his majestic splendor. If you’re familiar with the Big Dipper asterism, the Big Dipper pointer stars serve as your guide to the constellation Leo the Lion, as shown on the sky chart below.

You’ll find the moon and Regulus going westward across the sky throughout the night. They appear to move west for the same reason that the sun travels westward during the day, because Earth spins under the sky. The Earth spins from west-to-east on its rotational axis, causing the sun, moon and stars to travel westward each day and night.

That’s because the stars appear fixed relative to one another, much like dots in a connect-the-dots book. Modern astronomy has shown that the stars aren’t truly fixed; they’re actually moving, along with our sun, around the center of the Milky Way galaxy. Still, space is so vast that – in our lifetimes – we won’t notice stars changing their positions relative to one another.

Meanwhile, objects in our own neighborhood of space, our solar system – sun, moon, stars, planets, dwarf planets, asteroids and comets – wander in front of these backdrop stars. We see them move because they’re so much closer to us.

The moon moves its own diameter eastward in front of the backdrop stars in about one hour. So – if you watch on the evening of March 25, and notice the distance between the moon and Regulus – then get up in the wee hours before dawn March 26, you’ll see that the moon’s position has changed, relative to Regulus, the “fixed” star.

Bottom line: These next few days – March 25 and 26, 2021 – watch for the moon to travel in front of the constellation Leo the Lion, past the bright star Regulus, the Lion’s Heart.