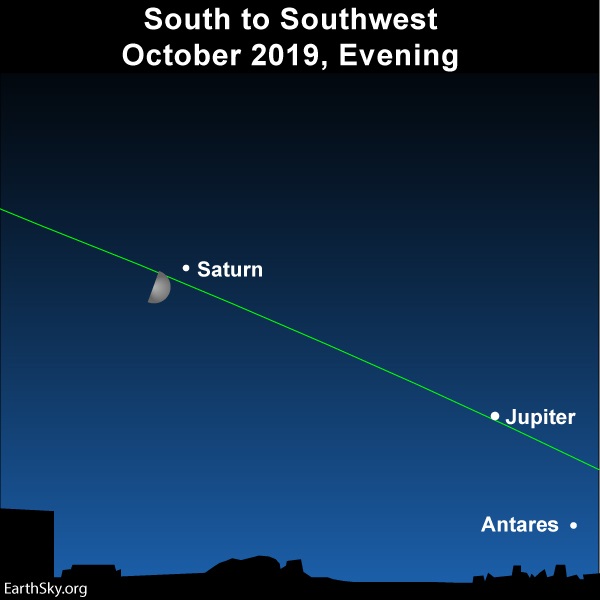 On October 5, 2019, the moon will be at or near its first quarter phase, coupling up with the planet Saturn on the sky’s dome. What’s more, the lit side of the moon will be pointing at the blazing planet Jupiter beneath the moon and Saturn. Watch for the celestial drama to illuminate the movie screen of the sky as soon as darkness falls.

South of the equator, it’d actually be possible see the moon occult (cover over) Saturn from a sizable swath of the Southern Hemisphere. If you’re at the right spot worldwide, you can watch the moon disappear behind the moon’s dark side and then reappear on its illuminated side. The worldwide map below, via the International Occultation Timing Association (IOTA) shows where the lunar occultation of Saturn takes place on October 5, 2019. 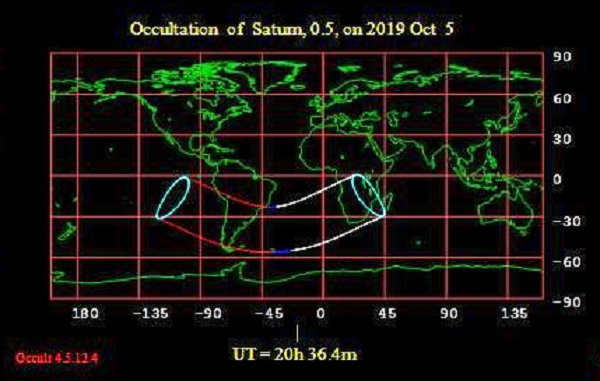 By the time darkness falls to North America on October 5, 2019, the moon will be slightly past first quarter, and the moon will be somewhat to the east (or southeast) of Saturn. From Europe and the most of Africa, you’ll see the first quarter moon to the south or slightly southwest of Saturn. From Asia, Australia and New Zealand – as darkness falls on October 5, 2019 – look for the moon to be a little shy of first quarter phase and to the west (Jupiter side) of Saturn. If you don’t know which way is west, keep in mind that brilliant Jupiter lies to the west of Saturn.

No matter where you live worldwide, look first for the moon and that nearby bright “star” will be the planet Saturn.