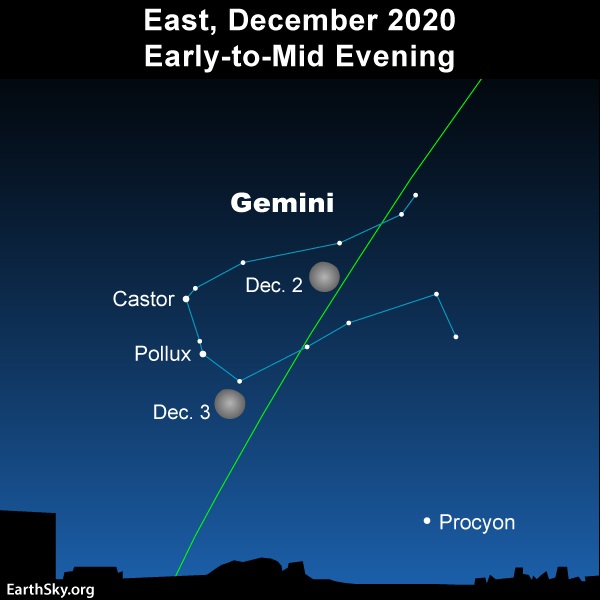 On December 2 and 3, 2020, the bright waning gibbous moon shines in front of the constellation Gemini the Twins. Watch for them not at nightfall, but shortly afterwards, when the sky has gotten good and dark. They’ll climb over your eastern horizon in early evening, and, once the moon and Gemini are up, they’ll be out for rest of the night.

The lunar glare will probably wash out the stick figure of the Gemini Twins, but the constellation’s bright stars, Castor and Pollux, should be able to withstand the moon-drenched skies. If you can’t see these stars otherwise, place a finger over the moon and take another look.

The radiant point for the Geminid meteors – which peak in 2020 around December 14 – is in front of the constellation Gemini, near the bright star Castor. Note that you don’t have to find the radiant to watch the Geminid meteor shower. On the late nights and early mornings around the shower’s peak, the meteors will appear in all parts of the sky. Read more.

Gemini contains the radiant point for the Geminid meteor shower. The Geminid meteors – December’s best meteor shower – streak the sky in any and all directions. But, if you trace the paths of these meteors backward, they all appear to emanate from the constellation Gemini, from near its bright star Castor. It’s only a chance alignment, of course, as the Geminid meteors are just bits of comet-dust, which vaporize or burn up about 60 miles (100 km) above the Earth’s surface. Meanwhile, Castor is a mighty star, residing some 34 light-years distant. The Geminids originate right here in our own solar system, in a mysterious blue comet-asteroid hybrid object known as 3200 Phaethon. Expect the Geminids’ peak on and around the night of December 13-14, 2020.

That’s from mid-to-late evening Sunday night (December 13) until dawn on Monday (December 14), with the greatest numbers coming around 2 a.m. (at all time zones).

Fortunately, in 2020, there will be no moon to ruin the show, as a new moon and a total eclipse of the sun will take place on December 14.

If you can’t stay up late on December 13-14 (Sunday-Monday), try the weekend nights instead: December 11-12, and December 12-13. You might still see a good spattering of meteors.

How can you find Gemini when the moon has moved away? Maybe you know you don’t need to find a meteor shower’s radiant point to enjoy meteors. But maybe you’ll want to find Gemini, anyway, when the moon has moved on. There are several ways to do this. If you live at a northerly latitude, and are familiar with the famous Big Dipper asterism, try star-hopping to Gemini, as we show below. 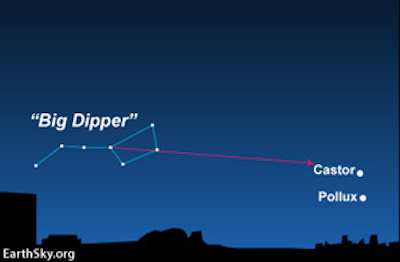 Draw an imaginary line diagonally through the Big Dipper bowl to locate Castor and Pollux. This is around mid-evening in December at mid-northern latitudes. 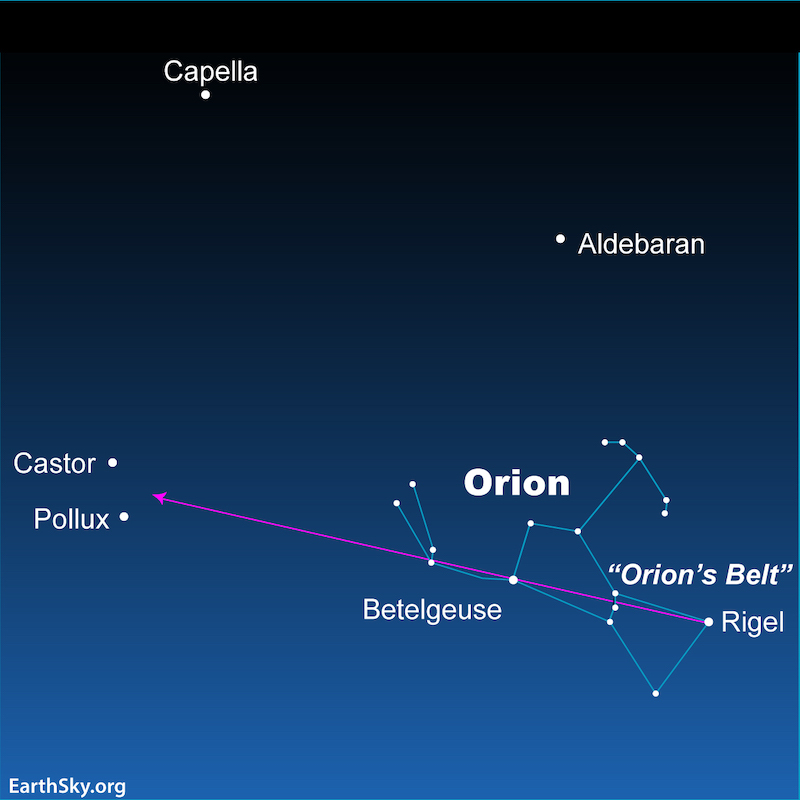 Looking eastward around mid-evening in December from mid-northern latitudes. Draw an imaginary line from Rigel through Betelgeuse to star-hop to Castor and Pollux.

Bottom line: We can use the moon to find the Gemini stars Castor and Pollux on December 2 and 3, 2020. Then, when the moon is long gone – some week and a half from now – we can rely on the Big Dipper or Orion to escort us to Castor and Pollux when the Geminid meteor shower is in full swing.

Read more: All you need to know about the Geminid meteor shower 2020