Moon, Antares, Jupiter from August 7 to 9

On August 7, 8 and 9, 2019, watch as the moon moves out from in front of the constellation Libra, then sweeps in front of neighboring Scorpius and past the bright planet Jupiter.

You might – or might not – see Libra’s two brightest stars, Zubenelgenubi and Zubeneschamali, in the moon’s glare on August 7. These two stars are modestly bright, and pretty easy to see on a dark night, yet may fade from view in a sky beset by moonlight or light pollution. After all, these Libra stars are about five times fainter than the red supergiant star Antares, which shines at 1st-magnitude brightness. 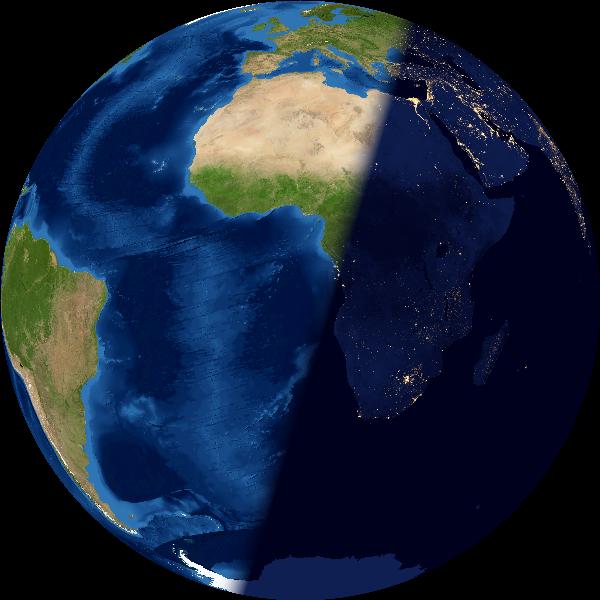 Simulation of the last quarter Earth as seen from the 1st quarter moon. The terminator – shadow line between day and night – shows you where it’s sunset on Earth at the exact instant of the first quarter moon. Image via EarthView.

On August 7 and 8, the dark side of the waxing moon points in the direction of the star Antares and the king planet Jupiter. Although Antares and Jupiter shine fairly close to one another on the sky’s dome, you won’t have any trouble distinguishing Antares from Jupiter. The king planet outshines Antares by over 20 times. Of course, it’s only Jupiter’s nearness to Earth that causes it to look so bright. Jupiter is a planet, shining by reflected sunlight, while Antares is a star, shining by light made in its own interior.

The moon always travels in orbit around Earth eastward relative to the backdrop stars and planets of the zodiac. Antares and Jupiter reside to the east of the moon on both August 7 and 8, yet the moon will be much closer to Antares and Jupiter on August 8 than on August 7, for the whole Earth. By August 9, look for the moon to pair up quite closely with Jupiter.

The moon is now waxing (increasing) toward full moon. The dark side of a waxing moon always points eastward, in the moon’s direction of travel through the constellations of the zodiac. Even though the moon goes westward throughout the night because of the Earth’s rotation, the moon always journeys eastward through the zodiacal constellations because of its orbital motion. This orbital motion causes the moon to travel its own angular diameter of about 1/2 degree eastward – about the width of a pencil at arm’s length – per hour. That means you can notice the moon’s orbital motion tonight, just by noticing its distance from, say, Jupiter in early evening and again in the hour before midnight, when the moon is about to set.

Sky chart of the constellation Libra the Scales via IAU (International Astronomical Union).

In addition to Earth’s spin on its axis, and the moon’s motion in orbit around Earth, there’s another motion that causes a shift in heavenly objects. That is the motion of Earth’s orbit around the sun. 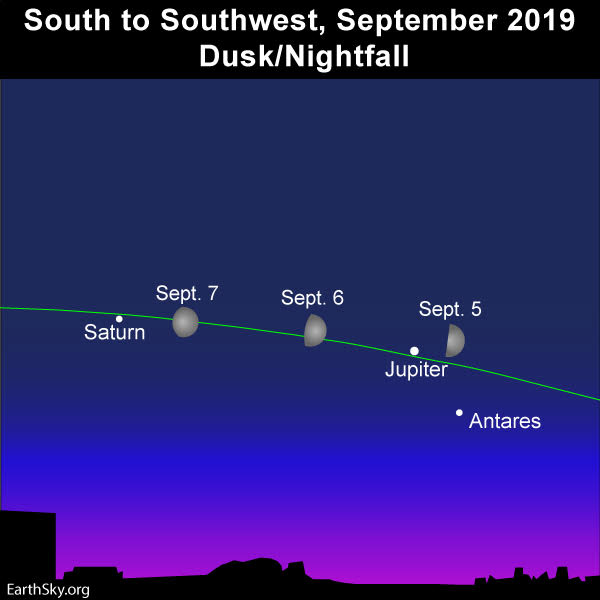 Bottom line: On August 7, 8 and 9, 2019, watch for the waxing moon to move out of the constellation Libra as it heads for the gas giant planet Jupiter and the red supergiant star Antares.