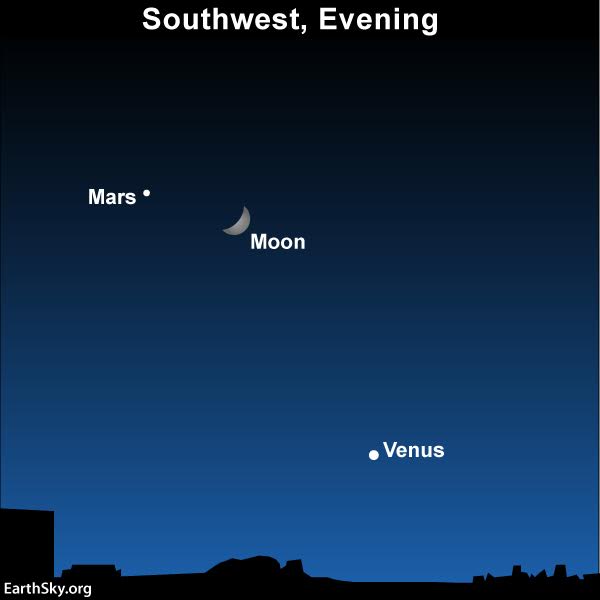 Tonight – December 4, 2016 – the waxing crescent moon has moved up in the evening twilight sky to appear close to the planet Mars. If you look, you might notice much-brighter Venus before you notice Mars. Watch for Mars as dusk gives way to nighttime. It’ll be the moderately-bright “star” in the vicinity of the waxing crescent moon.

Venus, the second-brightest heavenly body, after the moon, is some 85 times brighter than Mars is right now. Even so, Mars should be easy to see with the eye alone in a dark sky.

Over this coming month, watch for Venus to climb upward in the twilight sky, toward Mars. Meanwhile, Mars will be falling downward, toward Venus. Mars and Venus will be fairly close together in the evening sky in late January and early February 2017. By that time, however, Venus will have brightened while Mars will have dimmed. Venus will shine a whopping 185 times more brilliantly than Mars at that time, yet Mars should still be visible to the unaided eye in a dark sky.

Bottom line: Use the moon to find Mars on the evening of December 4, 2016. Then watch day by day, as the gap between Mars and Venus shrinks.

Thank you! Your submission has been received!
Oops! Something went wrong while submitting the form.
END_OF_DOCUMENT_TOKEN_TO_BE_REPLACED

Moon near Jupiter, August 14 and 15 mornings