Moon near Jupiter again on July 9 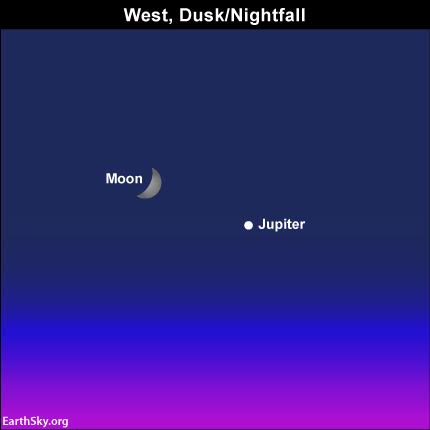 Tonight – July 9, 2016 – as seen from around the world, the moon again shines quite close to the giant planet Jupiter. As you gaze at them, imagine Jupiter’s newest “moon,” a spacecraft that journeyed five years through space to reach Jupiter and began orbiting around it this past Monday. This Juno spacecraft mission is the first since Galileo, which arrived in 1995, to orbit Jupiter.

The featured chart at top shows Jupiter and the moon on Saturday night as viewed from North America.

From mid-northern latitudes in Europe and Asia, you’ll see the moon closer to Jupiter than we see it in North America as darkness falls on July 9.

The most stunning view, though, will be from Australia. Check out the special chart, below, made just for our Australian friends, depicting the moon and Jupiter on this night. Indonesia and eastern Asia will also see the waxing crescent moon and Jupiter close together on July 9. 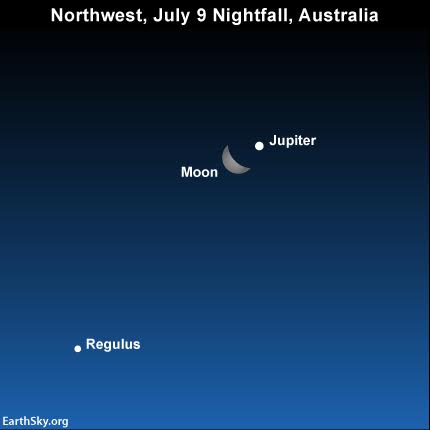 Our friends in Australia will enjoy an especially close pairing of the moon and Jupiter on July 9, 2016.

Enjoy Jupiter now. Day by day, the giant planet is defending toward the sunset, closer and closer to being swallowed in the twilight glare. Jupiter will be gone from our sky – traveling behind the sun from Earth – by late August or early September.

Have a telescope? The four major moons of Jupiter – Io, Europa, Ganymede and Callisto – are quite easy to see through a modest, backyard telescope. Some people can even see one or two of these moons in steadily-held binoculars. Often, you can even see these Jovian moons in a twilight sky or a light-polluted city. Give it a try!

The four major moons of jupiter, often called the Galilean moons, have a very rich history in modern astronomy.

When Galileo first observed the moons of Jupiter revolving around the king planet in the early 1600s, it suggested to him the possibly that the planets might actually orbit the sun instead of Earth.

Io, the innermost Galilean moon, enabled the Danish astronomer Ole Romer to come up with a good approximation for the speed of light in 1676. In Ole Romer’s day, it was commonly thought that the speed of light wasn’t finite – but rather, instantaneous.

Bottom line: On July 9, 2016, as darkness falls, use the moon to locate the king planet Jupiter. Then use optical aid to glimpse its four major moons, Io Europa, Ganmede and Callisto.