After sunup, look for the daytime moon

In the days after every full moon, look in a blue sky after sunrise for a daytime moon. 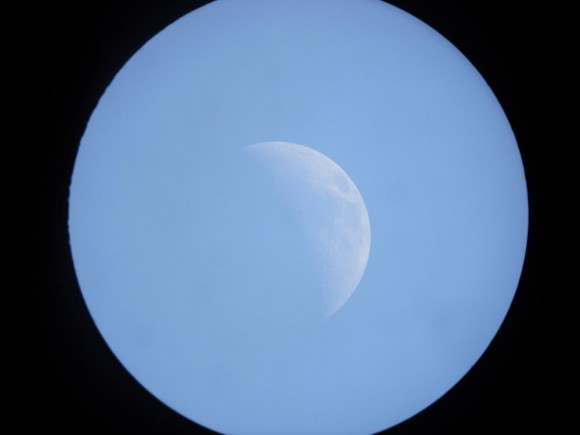 Daytime moon of May 27, 2012, seen from Ireland. Photo by Damian O’Sullivan. Thank you, Damian!

Beginning around now – around the morning of June 12, 2017 – watch for the daytime moon. No matter where you are on Earth, look generally westward after sunrise in the next few mornings to see the moon in a clear blue daytime sky.

Why can you see the moon in the daytime now? The full moon took place on June 9. That means the moon is now in a waning gibbous phase, rising after nightfall and setting in a westward direction after sunrise. This upcoming week, you can see the daytime moon in the morning sky. If you look for the moon at the same time every morning, you’ll see the moon climbing higher and higher up into the sky each day all week long.

By June 17, the moon will be at the last quarter phase – rising around midnight and southward around dawn. By June 24, the moon will be new – located on a line with the Earth and sun – crossing the sky with the sun and so not visible in our sky.

People love to see the daytime moon. They wonder about it, and ask about it. Once, a reader in Kansas City wrote in with the name “children’s moon” to describe a moon visible during the day. She said this name stemmed from the idea that children can’t stay up at night late enough to see the moon when it appears only in darkness.