There’s typically just one each of the major moon phases each month. But March, 2016, has two last quarter moons. Will some label the second one “blue?” 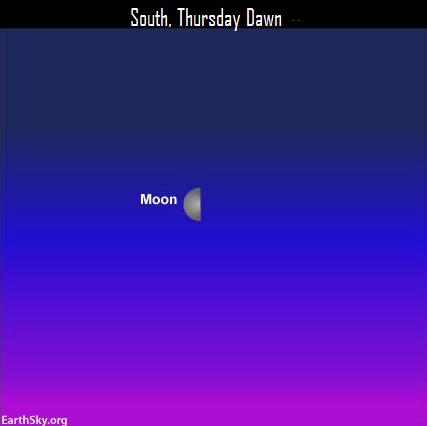 Like all last quarter moons, this one rises around midnight as seen from across the Earth. Assuming you wake up early on March 31, no matter where you are, you’ll see the moon high in your predawn/dawn sky.

At last quarter, the moon appears to us as half-lit in sunshine and half-immersed in its own shadow. Of course, in the reality of outer space, it’s always half illuminated; but from Earth, we only see the moon as half-illuminated at its first and last quarter phases.

Although the moon is always half-lit and half in shadow, we on Earth see varying portions of the moon’s illuminated side and dark side.

At last quarter moon, the lunar terminator – shadow line dividing the lunar night and day – shows you where it’s sunset on the waning moon. The terminator provides you with your best views of the lunar landscape through binoculars, the telescope or even the unaided eye. For optimum viewing, try looking in a twilight sky, when the moon’s glare is less obtrusive.

Two years from now, in 2018, the phases of the moon will fall on or near the same calendar dates that they do in 2016. However, two years from now, the same phase won’t be realigning with the same date. Instead, it’ll be the preceding lunar phase that fills the slot. 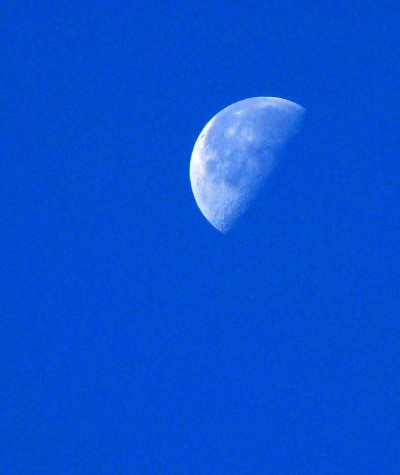 Last quarter moon against a blue sky, on the morning of July 10, 2012. Photograph by EarthSky Facebook friend Janet Furlong in Culpeper, Virginia. She spotted this moon high in the sky shortly after sunup. Thank you, Janet!

So, in the March of 2018, it’ll be the full moon (instead of the last quarter moon) that happens twice in one calendar month: March 2 and 31, 2018. Many people will take notice because – according to modern folklore – the second full moon of a month is the Blue Moon.

There’s also a seasonal Blue Moon, by the way – the third of four full moons in a single season. We’re currently in a season that’ll have four full moons and thus the next Blue Moon by the seasonal definition is coming up on May 21, 2016.

Bottom line: The length of the months are based on the moon’s movement around Earth, and there’s typically just one of the major moon phases in each month. But March, 2016, has two last quarter moons: March 1 and 31.