To maximize your chances of catching the young moon on October 28, find an unobstructed horizon in the direction of sunset. Binoculars will come in handy! On October 29-31, the moon will be easier to see, from all parts of the globe.

The young moon will return to the evening sky this week. Will you see it? That depends in part on when you look, and on where you live on the globe. A young moon is one just after the new phase. It’s a thin crescent seen in the west after sunset. This month’s new moon comes on October 28, 2019, at 03:38 UTC; translate UTC to your time. After that time, the moon will be waxing, visible in the western twilight. It’s good to be mindful you’ll spot the young moon after sunset with more ease on October 29 than on October 28 … and with even greater ease by October 30 or 31. 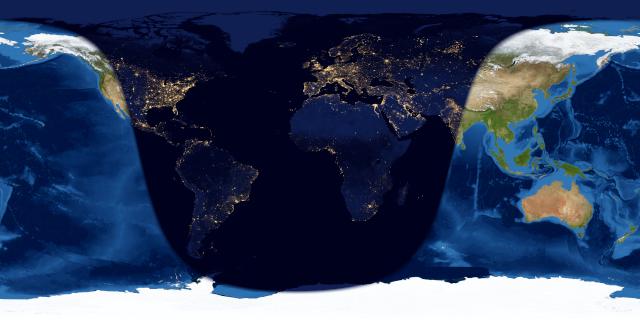 As the sun sets on October 28, 2019, near the North American West Coast, the moon will be 21 hours past new moon. As the sun sets at more easterly longitudes (Eastern United States, South America, Europe, Africa, Asia, Australia and New Zealand), the young moon will be younger yet and more difficult to see.

Moon on October 28. It’s difficult to catch any young moon that’s less than one day (24 hours) after new moon, and nearly impossible to spot one that’s less than 18 hours after new moon. So your east-west location counts, too, especially on October 28. On that date, by the time that sunset comes to the West Coast of North America, the moon will be 21 hours old, that is, 21 hours past new moon. You’ll have a better chance of spotting the young moon on October 28 from the North American Pacific Coast than at more easterly longitudes (Eastern United States, South America, Europe, Africa and Asia). Even from the U.S. West, though, it’ll be a big challenge, as the pale and whisker-thin crescent sets well before nightfall. See worldwide map above.

Some young moon aficionados have shown a uncanny knack for catching an exceedingly thin crescent that’s all but invisible in the western evening twilight. If you catch it, tell us in the comments below, or better yet … submit a photo to our community gallery.

Visit Sunrise Sunset Calendars to find out the moon’s setting time in your sky, remembering to check the moonrise and moonset box. 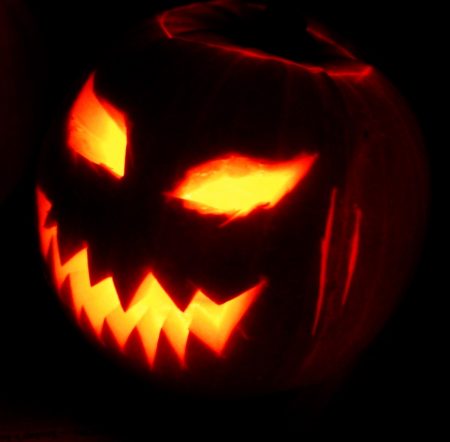 Scary jack-o’-lanterns are a Halloween staple. Image via Wikimedia Commons.

Moon on October 29-31. It’ll be great fun to see the moon wax this week, beginning around October 29. Each evening, the moon will appear higher up in the west at sunset, and thus – as the week progresses – the moon will stay out longer after the sun goes down. On the evening of October 31, in particular – Halloween evening for us in the U.S. – there will be a sweet little crescent moon in the sky, casting its faint light on parents and kids who are making the rounds trick-or-treating, as well as by any stray goblins and ghouls! 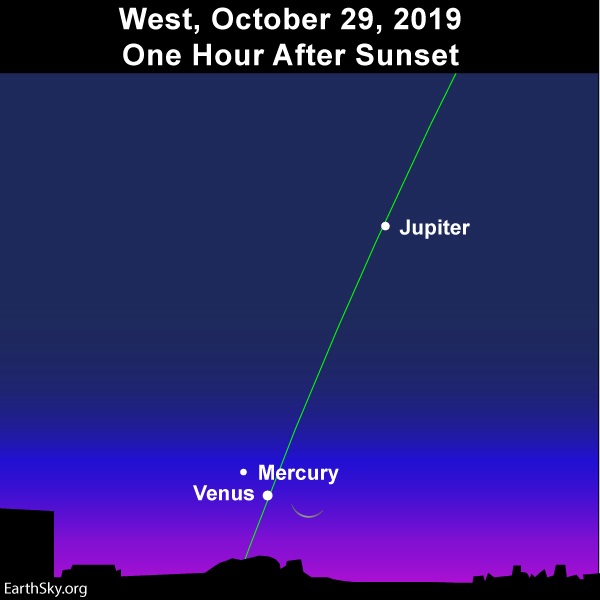 The moon joins up with Venus and Mercury as seen from Cape Town, South Africa, at dusk on October 29, 2019. The steep tilt of the ecliptic gives the Southern Hemisphere a big advantage over the Northern Hemisphere for catching the planets Mercury and Venus after sunset.

Planets after sunset. There are four planets in the evening sky now. The Southern Hemisphere definitely has the ringside seat for catching the inferior planets Mercury and Venus after sunset, while we at northerly latitudes are relegated to the bleachers. Mercury resides to the south of the ecliptic whereas Venus aligns with the ecliptic, so there are no mitigating factors for us at northerly latitudes. In a nutshell, the farther south you live, the longer that Mercury and Venus stay out after sunset. Here are the approximate setting times for these planets at various latitudes for the next several days (presuming an absolutely level horizon in the direction of sunset).

Click here for a sky almanac that gives you the setting times of the planets in your sky.

Two more bright planets light up the evening sky, both of which stay out till after nightfall. The brighter of the two is Jupiter, the fourth-brightest celestial object to light up the sky, after the sun, moon and Venus, respectively. Watch for the moon to meet up with the dazzling planet Jupiter around October 30 and 31, and to rendezvous with Saturn in early November. 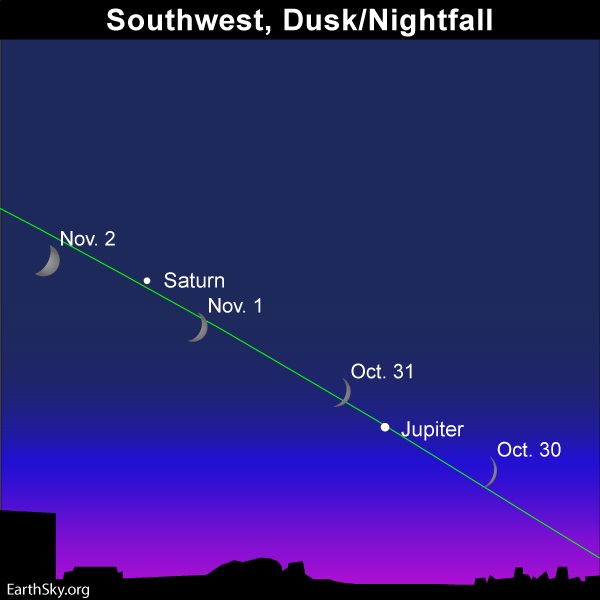 Day by day, watch for a wider lunar crescent to climb higher up at sunset and to stay out longer after dark.

Earthshine. Day by day, watch for a wider lunar crescent to climb higher up at sunset and to stay out longer after dark. In the next few days, you may note that the dark side of the moon is covered over by the soft glow of earthshine – sunlight reflected from Earth to the moon, and then from the moon back to Earth.

Bottom line: To maximize your chances of catching the young moon on October 28, find an unobstructed horizon in the direction of sunset. Binoculars will come in handy! On October 29-31, the moon will be easier to see, from all parts of the globe.