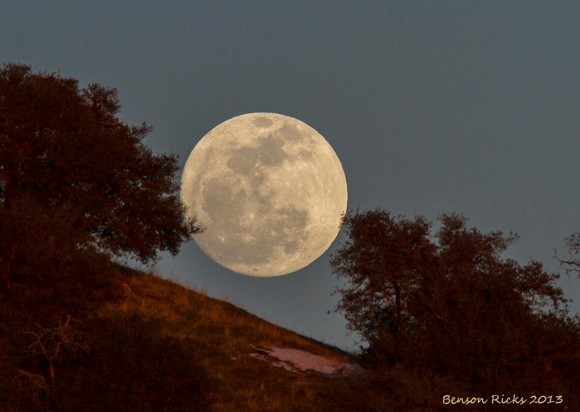 We in North America often call the second full moon of the winter season the Wolf Moon, Snow Moon or Hunger Moon. From around the world these next few evenings – January 27 and 28, 2021 – watch for a full-looking moon to light up the nighttime from dusk till dawn. In the Southern Hemisphere, this late January full moon will be the second of three summer full moons. By the way, the present season started on the December 2020 solstice and ends on the March 2021 equinox.

In other words, the moon is astronomically full when the elongation between the sun and moon equals 180 degrees. To find out how close the moon is to full, click on The Moon Tonight for the sun moon elongation. A positive number indicates a waxing moon and a negative number a waning moon.

Because the noon will be more or less opposite the sun these next few nights, expect to see a full-looking moon in the east at dusk/early evening. Then watch for the moon to climb upward during the evening hours, and to soars to its highest point for the night at or around midnight. (By midnight, we mean midway between sunset and sunrise.) If you’re an earlier riser, look for the moon low in your western sky during the wee hours before sunrise.

The contrast between the path of sun and path of the full moon will be striking from both the Northern and Southern Hemispheres.

In the Northern Hemisphere, the full moon’s lofty path across the nighttime sky will resemble that of the summer sun across the daytime sky. At midnight, watch for the moon to soar way up high, like the noonday summer sun. North of the Arctic Circle, the moon stays out 24 hours around the clock, like the midnight sun of summer.

Yet, in the Southern Hemisphere, the full moon follows the low path of the winter sun. At midnight, the moon sits low in the northern sky, just like the noonday winter sun. South of the Arctic Circle, the moon remains below the horizon for 24 hours around the clock.

Enjoy the full-looking moon in late January 2021, as this nocturnal sun brings the northerly latitudes some good cheer to this long winter night.