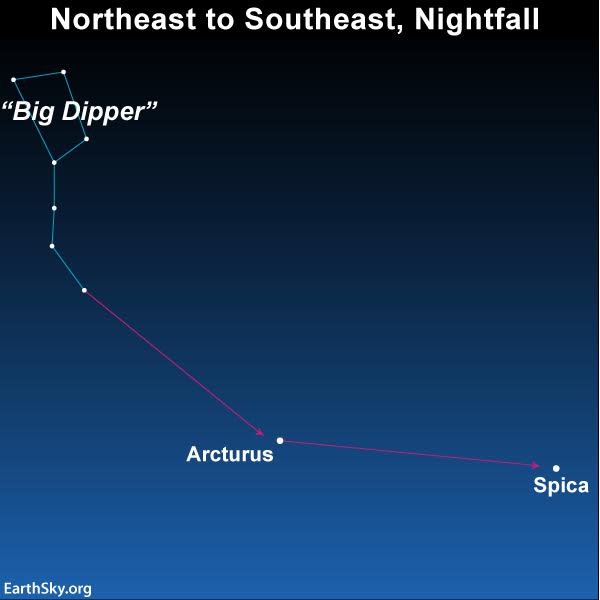 Follow the arc to Arcturus, and drive a spike to Spica. Scouts learn this phrase. Grandparents teach it to kids. It’s one of the first sky tools many learn to use in astronomy.

What’s more, these stars may be bright enough to be view from a town mildly beset by light pollution. After all, Spica serves as a perfect example of a 1st-magnitude star, whereas Arcturus beams brighter yet, shining one magnitude (2 1/2 times) brighter than Spica.

Follow the arc to Arcturus. Find the Big Dipper asterism in the northeastern sky in the evening sky this month, maybe around 9 p.m. It’s very easy to see, a large noticeable dipper-shaped pattern in the northeast. Once you see the Big Dipper, notice that it has two parts: a bowl and a handle. Then, with your mind’s eye, extend the natural curve in the Dipper’s handle until you come to a bright orange star: follow the arc to Arcturus.

Arcturus is the brightest star in the constellation Boötes the Herdsman. This star is known in skylore as the Bear Guard.

Modern astronomers know Arcturus as a giant star with an estimated distance of 37 light-years.

Drive a spike to Spica. Once you’ve followed the curve of the Big Dipper’s handle to the star Arcturus, you’re on your way to finding the bright, blue-white star Spica. Just extend that same curve on the sky’s dome.

Spica is the brightest light in Virgo the Maiden, a large, rambling constellation. The star and its constellation were sometimes associated with the Greek goddess of the harvest, Ceres. Spica is from the Latin word for ear, and the general connotation is that this star name refers to an ear of wheat, held by the goddess.

Today we know Spica as a tight double star. The two stars are indistinguishable from a single point of light via ordinary telescopes. Their dual nature was revealed only by analysis of the light from this system via a spectroscope, or instrument that splits light into its component colors. Both stars in the Spica binary system are larger and hotter than our sun. Their diameters are estimated to be 7.8 and 4 times the sun’s diameter, and, taken together, they’re more than 2,000 times brighter than the sun! 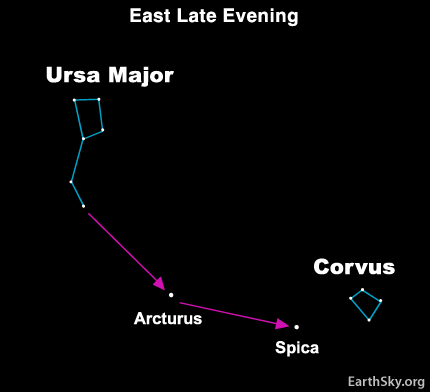 Bottom line: Remember … follow the arc to Arcturus and drive a spike to Spica! Have fun.