Whales are magnificent creatures and … they produce their own rainbows. Photos and video here. 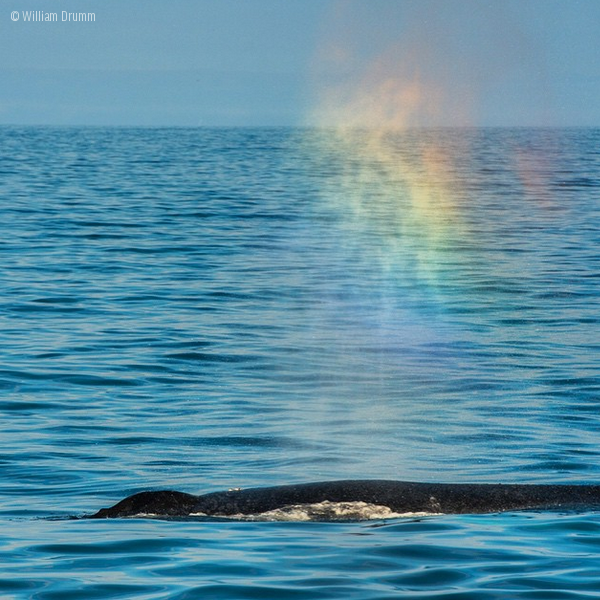 Rainbow above a whale in Monterey Bay. Photo by William Drumm via Oceana.

Here’s a collection of photos, and a video, of rainbows made by whales. Atmospheric Optics guru Les Cowley told me:

These are rainbows made by drops from the whale’s blowholes rather than the more usual raindrops.

These are true rainbows, not iridescence like the iridescence you sometimes see in clouds. Les told me:

Iridescence can be anywhere but it is most common close to the sun. The colors are disordered and pastel.

Rainbows (at least the everyday ones!) are opposite the sun. Their colors are always in the order red, orange, yellow, green, blue, indigo, violet.

Les Cowley has another whale rainbow photo in his Optics Picture of the Day series.

Also, be sure to check out the video below, which rsean9000 posted on YouTube in 2011, after a whale-watching cruise in Nova Scotia.

Whales’ blowholes, of course – which are their noses – are on the top of their heads. A whale breathes through its blowhole, but, contrary to any whale cartoons you might have seen, whales don’t actually blow water through their blowholes. Instead, they blow out a combination of air (they breathe out carbon dioxide, just as we human mammals do) and mucus. A whale’s out-breath is warm from the whale’s warm body, just as your out-breath is warm. In the colder and lower-pressure air above, water vapor that’s present condenses out above the whale as droplets.

It’s this spray of fine droplets, known as the blow, that creates the rainbow. 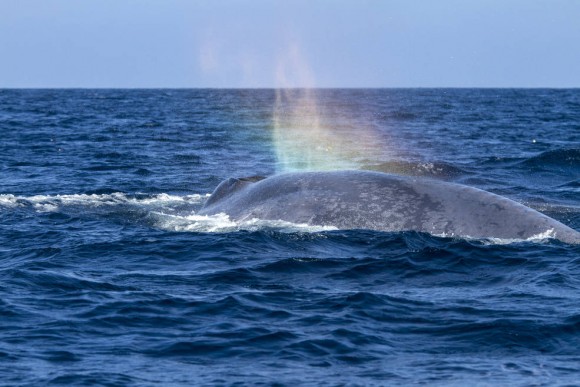 View larger. | A rainbow in the mist of a blue whale – one of our world’s most endangered species – off the coast of southern California in 2014. Image via Craig Hayslip/Oregon State University.

Bottom line: A collection of photos and a video of rainbows made by whales.