Watch a moon shadow on Jupiter

This composite represents an hour of Jupiter-watching. Watch a moon shadow on Jupiter’s face, and see how far the Great Red Spot moves in that time. 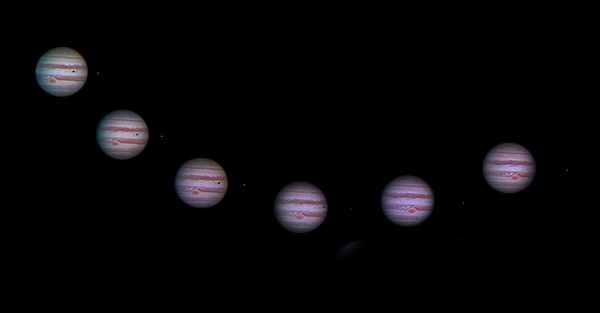 John Nelson submitted this cool composite of the shadow of one of Jupiter’s moons moving across the face of Jupiter. He wrote:

It was a nice clear night with a pretty stable atmosphere in the Puget Sound. I spent the evening imaging Jupiter as it tracked across the sky. My intent was to produce a set of sequential images to show Jupiter’s rotation. I was fortunate to capture a moon and its shadow on the surface moving across the face of the planet.

This is a composite of six images I took that night. The first three images were taken 6 to 8 minutes apart. There was a bit of a time lag, about 20 minutes, from image 3 to 4 because a couple of neighbors came by. They were curious about what I was doing and became interested in seeing the planet through the telescope.

A single moon was casting its shadow in the first 4 images. By image 5 the shadow had rotated off the face. Jupiter rotates faster than any other planet in the solar system at about 28,000 mph [ed. note: A “day” on Jupiter lasts 9 hours and 56 minutes]. This entire sequence took a little over an hour and you can see how far the Great Red Spot has moved in that time.

The camera/filterwheel were attached to a Powermate 4x image amplifier and this was attached to an Explore Scientific 127mm(5″) refractor telescope.

The OTA and optical train were mounted on an iOptron ieQ45 German Equatorial Mount.