Voyager 1, you are here

Voyager 1 is now officially the first human-made object to venture beyond our solar system. This illustration may help you visualize where Voyager 1 is now. 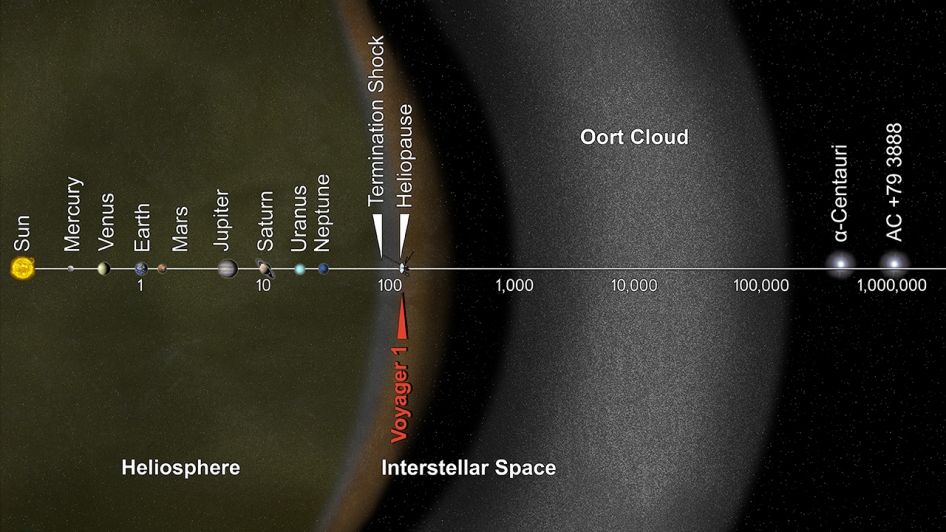 This artist’s concept puts solar system distances in perspective, but you have to think about it a bit to understand it. The scale bar is in astronomical units (AU), with each set distance beyond 1 AU representing 10 times the previous distance. One AU is the distance from the sun to the Earth, by the way, which is about 93 million miles or 150 million kilometers. Neptune, the most distant planet from the sun, is about 30 AU.

Informally, the term solar system is often used to mean the space surrounding our sun, out to the last planet. Astronomers, however, might speak of the solar system as the heliosphere, or sphere of the sun’s influence. Our dominates its own region of space and creates a sort of bubble of charged particles in the space surrounding it. These particles are “blown” out from the sun by the solar wind. It’s this heliosphere that Voyager 1 has now left. NASA says Voyager 1 actually crossed the heliopause, the boundary around the region of the sun’s influence, over a year ago, on August 25, 2012.

Voyager 1 is now beyond the farthest planet, but not beyond the Oort Cloud. Voyager 1, humankind’s most distant spacecraft, is around 125 AU away now, or 125 times the Earth-sun distance.

In other words, it’s a long, long way from the next-nearest stars.

In 40,000 years, Voyager 1 will sweep within 1.7 light-year of the star AC +79 3888 (also known as Gliese 445). The star is located over 17 light-years from our sun, in the direction of our southern constellation Camelopardalis. So that is the direction Voyager 1 is heading now.

Click here to hear the sounds of interstellar space, from Voyager 1.