Check out this amazing new video from NASA’s Perseverance rover, showing its own descent and landing on the surface of Mars last week. Truly, it’s like nothing seen before! Also, the first-ever audio from Mars …

New video from NASA/JPL-Caltech – released February 22, 2021 – shows the view from the Perseverance rover itself, as it touched down in Mars’ Jezero Crater last week. The rover’s flashy new cameras delivered this rover’s-eye view of the landing process … and isn’t it great? It was definitely worth the wait, especially when you get to around 2:42, when Martian dust starts to flow as the rover sets down. Wow! Perseverance’s suite of technology has now provided us with the most detailed video and photo records of landing on a neighboring planet, the first time we’ve watched ourselves land on another world. What’s more, there’s now audio from Mars’ surface, for the first time. Check that out in the tweet below.

Who knows what cool thing Perseverance will show us next, as its science begins?

How was the video obtained? The rover was equipped with an upward-pointing camera mounted on the back shell of the spacecraft (this capsule protecting the rover is called the aeroshell). The upward camera caught a look at the parachute opening that helped the rover land softly despite Mars’ thin air. Beneath the rover is a downward-pointing camera on the descent stage (a kind of rocket-powered jet pack that helped fly the rover to its landing site), which filmed its first touch-contact with the ground on Mars. NASA commented:

The audio embedded in the video comes from the mission control call-outs during entry, descent, and landing.

Click here for raw images from the Perseverance rover on Mars 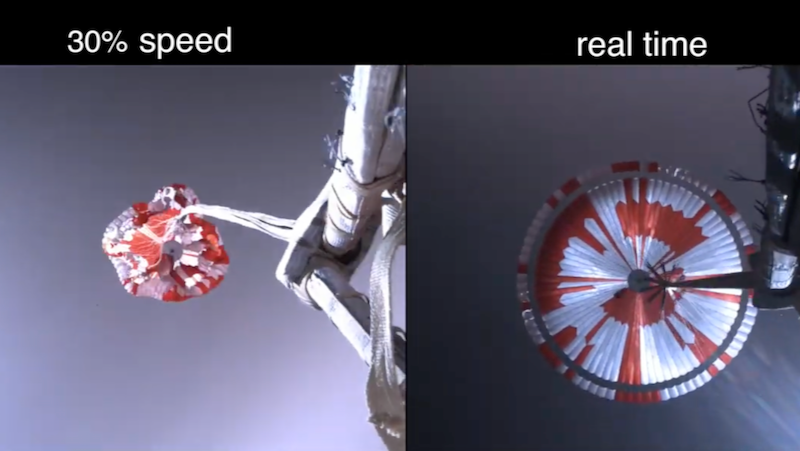 We’ve never seen this before. It’s a rover’s-eye view of a parachute opening to ease the craft’s entry through Mars’ atmosphere! Wow. Image via NASA/ JPL-Caltech.

Now here’s something else really exciting … the first-ever audio from Mars! It comes to us by way of the Planetary Society, which wrote in advance of Perseverance’s launch last July:

That’s about to change. NASA’s Perseverance rover, which is days away from blasting off on a mission to search for signs of past life and collect samples for future return to Earth, will have not one, but two microphones aboard. One will listen as the rover plummets through the Martian atmosphere for landing, and another will record sounds as the rover does its scientific work in Jezero Crater – an ancient river delta where life may have flourished.

Hear the first sounds of Mars ever collected in the tweet below. And know this … there’s more to come! Howling winds of a Martian dust storm maybe? We can hope for that, as long as it doesn’t harm the rover …

The Planetary Society has advocated for a Mars microphone for over 25 years. Today, @NASA released the first recorded sounds of Mars. Congratulations @NASAPersevere and Planetary Society members on this remarkable achievement! pic.twitter.com/KUEIzgXB8c

Would you like to cry more about robots on Mars?

Percy is carrying a family photo.