Remember the quadruple rainbow image that went viral last month? Here’s an even more unusual rainbow, caused by the wave nature of light. 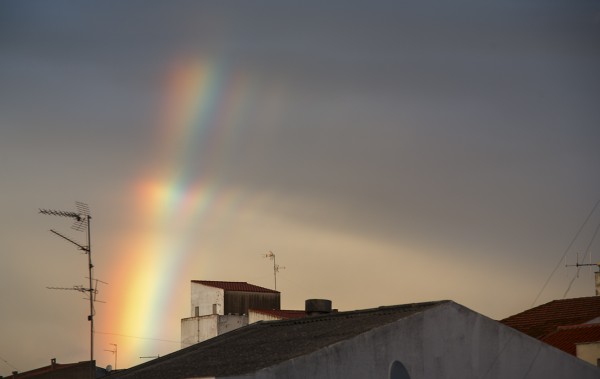 I visited the house of my mother, stormy day … luckily, had the camera. The rainbow became full, partial, double … and for a moment this occurred.

… small water bodies that appear before the confluence of the rivers are devoted to rice fields, sometimes, by the rains, they remain flooded out of the growing season …

But we also asked Les Cowley of the wonderful website Atmospheric Optics. He said this rainbow is no ordinary reflection bow and instead is a special rainbow phenomenon, created due to the wave nature of light:

This rainbow is unusual.

The narrower colored arcs to the right of the broad main bow are supernumeraries. These are a light wave interference effect that gets more prominent when raindrops get small. The supernumeraries are usually concentric to the main bow and normally we see at most one or two.

The supernumeraries get farther apart as the raindrops decrease in size.

In this Spanish bow, the raindrops at different heights have different sizes. So we get wildly changing supernumerary spacings. They also change the width of the main bow slightly and give it a bumpy appearance.

There’s another effect. The raindrops – within each height zone – are all almost of the same size. This is evidenced by the large number of supernumeraries.