This stupendous photo by Justin Ng shows the recent array of three planets seen from Earth’s Southern Hemisphere, the Milky Way and the elusive zodiacal light. 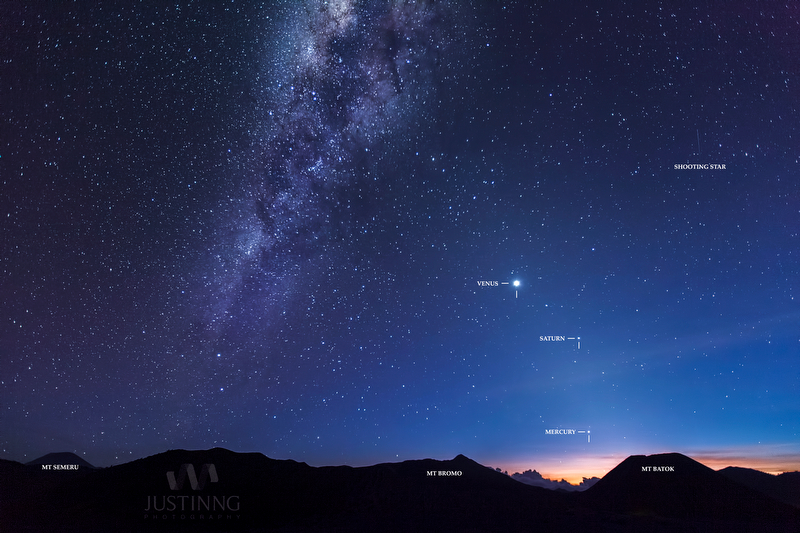 View larger. | Milky Way on left, and faint zodiacal light on right, with planets Venus, Saturn and Mercury in front of the light. Photo taken at Mount Bromo in Indonesia on September 28, 2013 by Justin Ng. Click here to see more photos by Justin Ng.

Justin Ng of Singapore captured this image on September 28, 2013 on a trip to Mount Bromo in East Java, Indonesia. He wrote:

At one glance, one may think that this image is photoshopped or it’s a composite because it’s simply impossible to see Milky Way galaxy at dusk. But what you’re really seeing here is a single exposure shot of a rare phenomenon, known as zodiacal light (a.k.a. “false dusk”), that I have captured during my recent trip to Mount Bromo in the Southern Hemisphere. Zodiacal light is best seen during spring and autumn, and I chose to visit Mt Bromo a few days after [the Southern Hemisphere’s autumnal equinox] as I hoped to capture the zodiacal light along with the 3 planets, 3 volcanoes and a Milky Way galaxy.

This image was captured when the sun was around 15 degrees below the horizon and the sky was reaching its astronomical darkness state.

Zodiacal light is actually sunlight reflecting off dust grains that circle the sun in the inner solar system. These grains are thought to be left over from the process that created our Earth and the other planets of our solar system 4.5 billion years ago.

I also did a 6 hours timelapse for this amazing phenomenon. You may check out the first 2 hours time-lapse movie at https://vimeo.com/76080545 showing how the zodiacal Light became visible as the sky was approaching its astronomical darkness state.