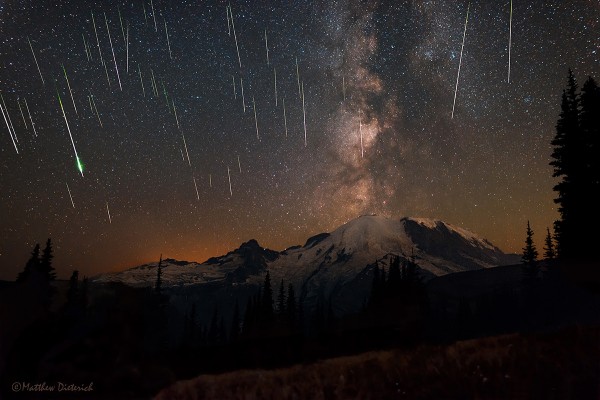 Matt Dieterich submitted this composite image to EarthSky this week. It’s from the 2015 Perseid meteor shower in August, typically one of the year’s best showers. Matt wrote:

Talk about a night to remember! The morning of Thursday August 13, 2015 the Perseid meteor shower peaked. I was working at Mt. Rainier National Park and created this image from a 2-hour-long time-lapse video to record as many Perseid meteors as possible.

The alignment of our Milky Way was situated perfectly vertical over Mount Rainier, an active volcano.

Between 2 and 5am we counted over 200 meteors! Unfortunately, the camera recorded only about 40 of them.

Each image with a meteor was manually aligned on one main star field to place meteors in their respective locations in the night sky.