Most ice halos around the sun or moon are made by plate- or column-like hexagonal crystals. The multiple halos in this image by Greg Redfern are from rare pyramidal ice crystals. 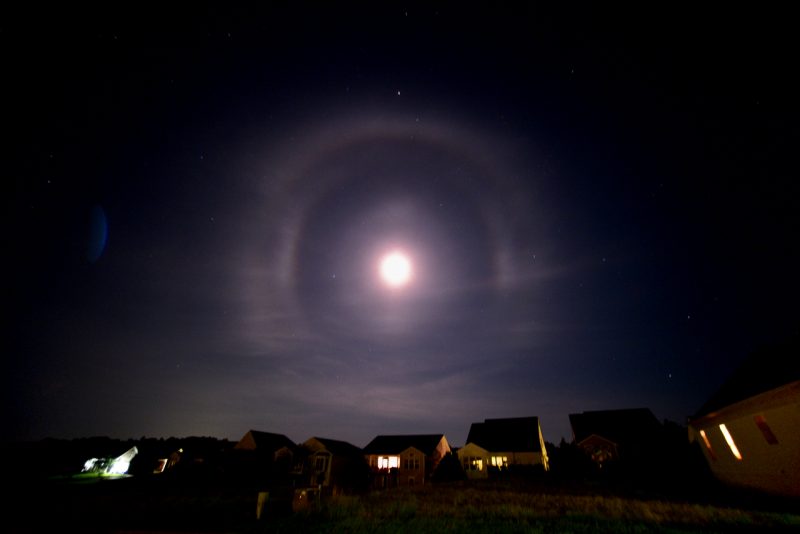 View larger. | How many halos around the moon do you count in this photo by Greg Redfern?

Greg Redfern of the blog What’s Up? The Space Place captured this image in Virginia on June 4, 2017. He wrote to EarthSky:

A double lunar halo. I have never seen one like this in 5-plus decades of skywatching. Pretty amazing.

Indeed it is! And, Greg, there are more than just two halos here. Most halos visible around the sun or moon are caused by ice crystals in the upper air, and they’re relatively common. We receive many images of them each day. But I’d never seen multiple halos, like these, either. So I asked Les Cowley of the great website Atmospheric Optics about your photo. He confirmed:

This is a rare display.

Most ice halos around the sun or moon are made by plate- or column-like hexagonal crystals. The halos in Greg’s image came from rarer pyramidal crystals.

Pyramidal crystals tumble more in the air and so they usually form only rather fuzzy circular halos. In Greg’s image, we have 9-, 18-, 20- and 23-degree radius rings compared to the common 22-degree halo.

Even more rarely, some pyramidals can be well oriented in this sky. Note the bright spots above and below the moon on the inner 9-degree halo in Greg’s photo, plus the bright areas to the moon’s left and right on the 18-degree circle [see a diagram here]. These are the pyramidal crystal equivalents of paraselenea, or ‘moondogs.’

Thanks for sending your photo, Greg, and thank you, Les!

Bottom line: A rare sighting of multiple halos around the moon – on June 4, 2014 over Virginia – caused by pyramidal ice crystals.