Ever seen a sunset like this one? It was caught in Austin, Texas, a city that residents fondly – or not so fondly – call “the allergy capital of the world.” 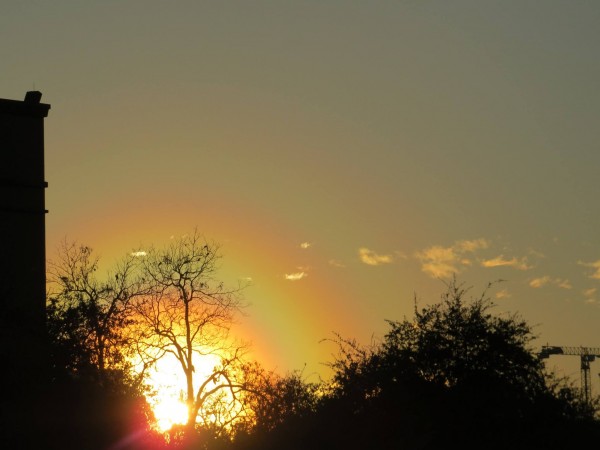 We had to go immediately to Les Cowley of the website Atmospheric Optics with this photo by Angela Dobes Carver in Austin. Sure, 22-degree halos at sunset are fairly commonly seen, but this sunset? With all those rings and colors? Turns out this strikingly beautiful sunset – caught on January 8, 2016 – is caused by pollen in the air. Les said:

It’s a simple corona, [usually] formed by sunlight interaction with small water droplets in the air. To have so many rings the droplets must have been uniformly sized.

Coronae like this are often formed by light scattered from pollen grains. They, of course, have exactly the same size if from the same type of plants. But I doubt if Texas has much pollen in the air right now? Maybe I’m wrong?

Turns out he was wrong. The streets of Austin, Texas in January are crowded with people bearing tissues, as it turns out. Some of them probably marveled at this sunset, while cursing its cause.

Or make your own from puffball mushrooms: https://www.atoptics.co.uk/fz976.htm