Best photos of Venus and Mercury after sunset

Venus and Mercury were closer earlier this month, but they’re easier to see now. Don’t miss these 2 innermost worlds in our solar system, in the west after sunset. 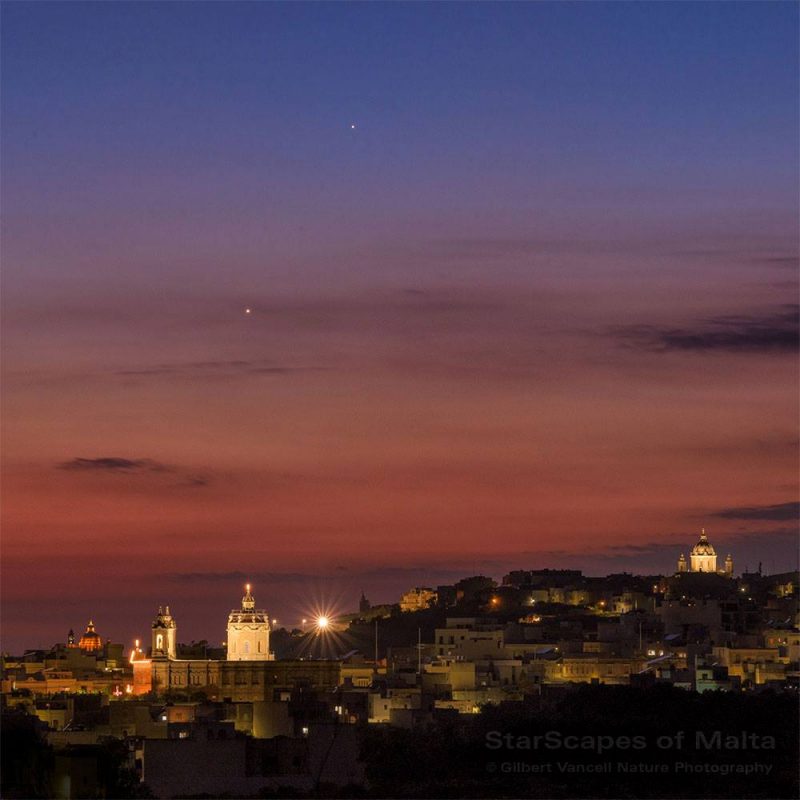 Gilbert Vancell, a nature photographer on the island of Malta, caught Venus and Mercury on March 8, 2018. Around March 8, Mercury is higher in the sky.

Mercury is called the most elusive planet because it’s the innermost planet, always hovering near the sunrise or sunset. Venus is the brightest planet and was in the morning sky throughout the latter part of 2017. Venus only began showing up after sunset again last month, when you had to look exceedingly low in the sky to see it. Earlier this month, if you looked very low in the west after sunset, you could see Venus and Mercury in conjunction, that is, exceedingly near each other on our sky’s dome. Their actual conjunction was March 5, when they were only a little more than one degree apart. That’s about the width of your little finger at arm’s length. Venus and Mercury will remain close enough together on the sky’s dome to fit inside a typical binocular field of 5 degrees for the first three weeks of March 2018.

Thanks to all who submitted photos!

Read more: Use Venus to find Mercury in March 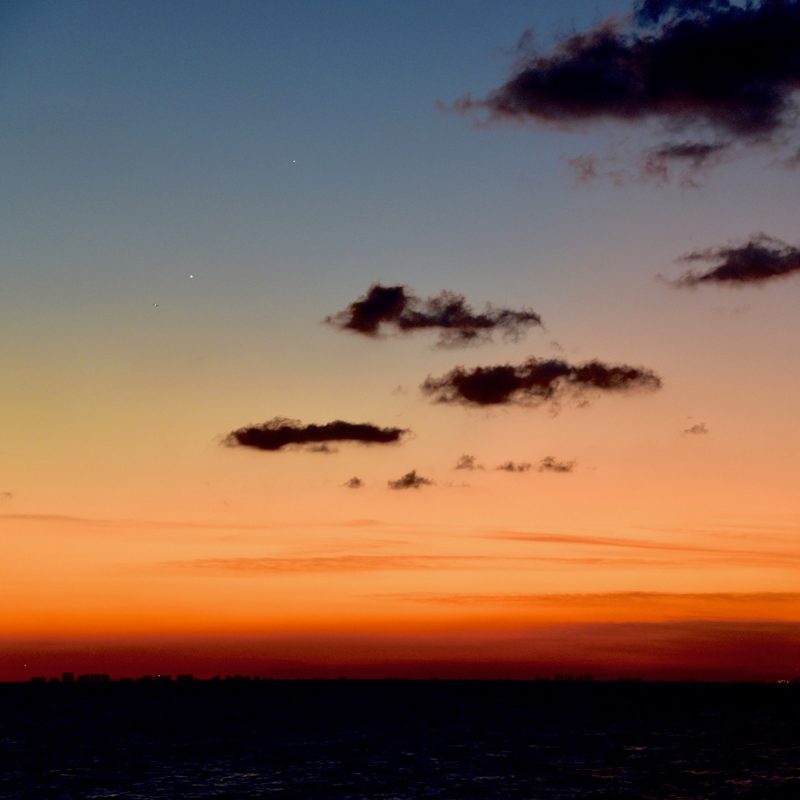 View larger. | At sea – off the coast of Miami aboard the ship Azamara Quest – Venus (lower) and Mercury adorn the colorful sunset sky. Via Greg Redfern on March 9. 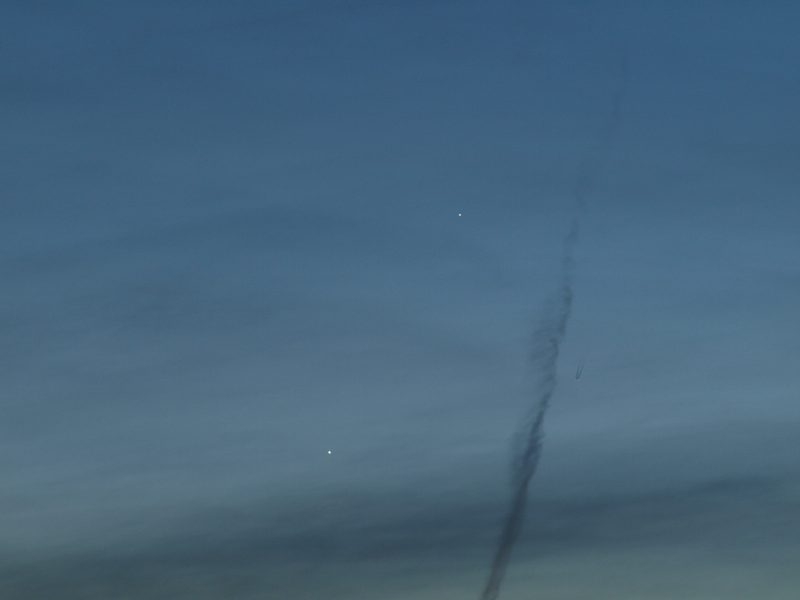 Venus (lower, brighter) and Mercury with a jet contrail on March 7, 2018, caught by Holly Harker at Stagecoach State Park, Colorado. 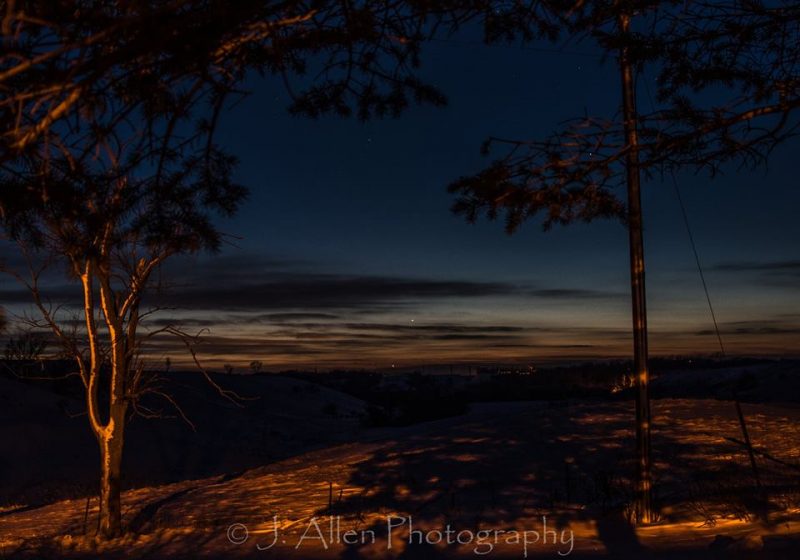 View larger. | Judy Allen captured Mercury and Venus on the evening of March 8, 2018, in southwest Minnesota. Venus is lower in the sky now, and the brighter object. 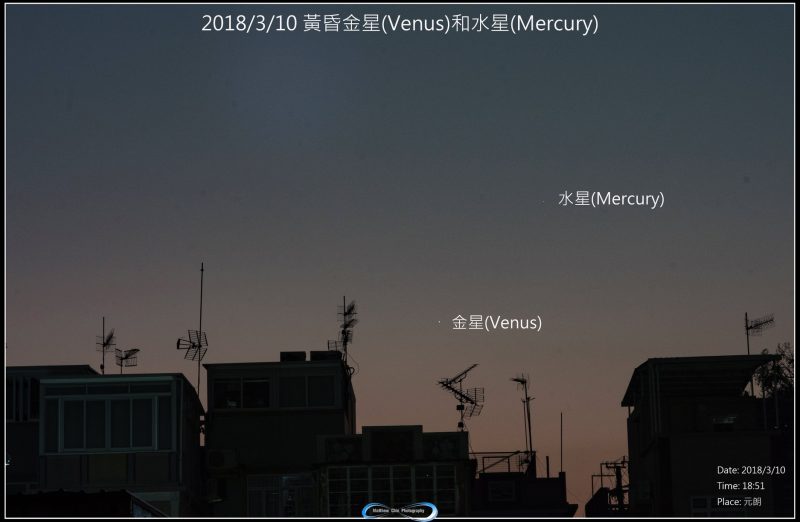 Matthew Chin in Hong Kong caught Venus and Mercury on the evening of March 10, 2018.

The best time to glimpse Venus and Mercury this month might be around March 18, 19 and 20, when the moon sweeps past them. Mercury will be past its highest point in the sky by then. It’ll be already sinking into the sun’s glare. But the moon, Venus and Mercury will be a beautiful sight in the west after sunset around those dates (see chart below). Afterwards, Mercury will disappear into the sun’s glare, and Venus will go on to appear in our evening sky for many months. Enjoy them!

Don’t miss Mercury and Venus when the moon sweeps past it around March 18, 19 and 20! Read more. 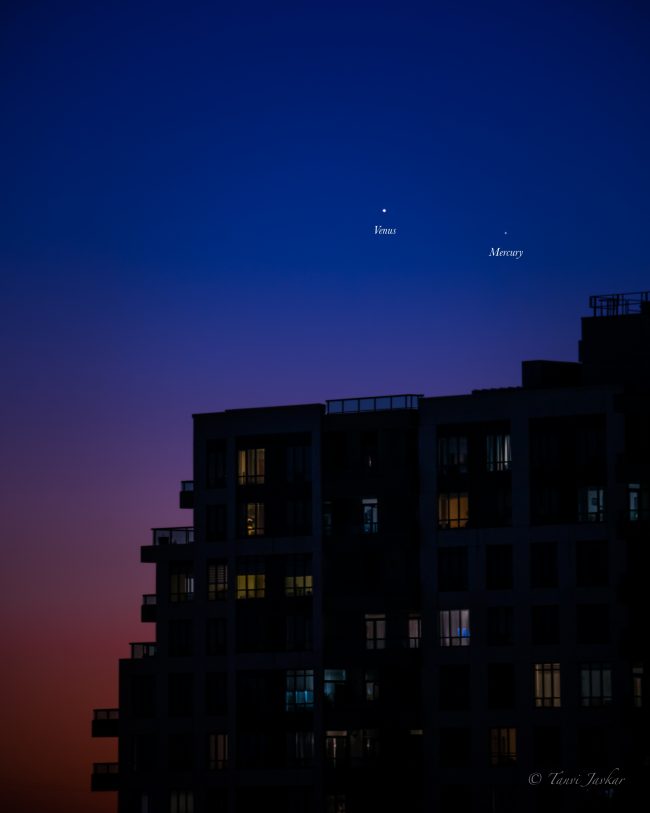 Tanvi Javkar caught Venus and Mercury on March 5, 2018, from Mississauga, near the city of Toronto, Canada. 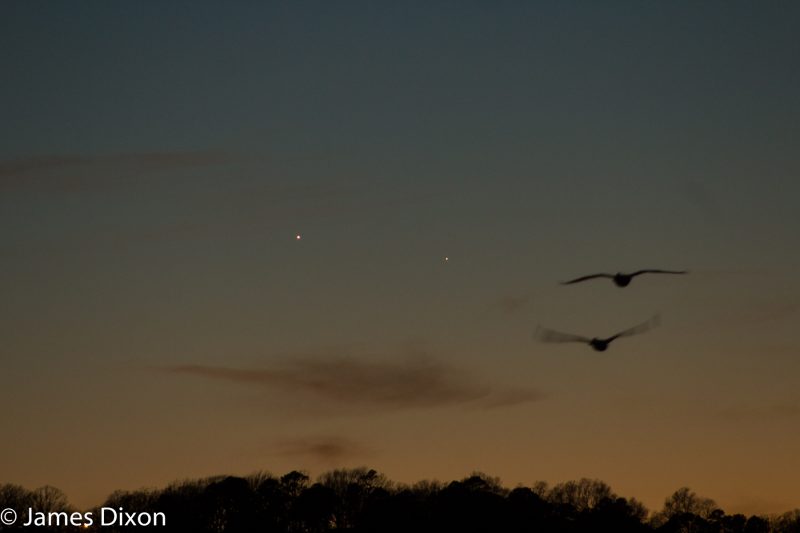 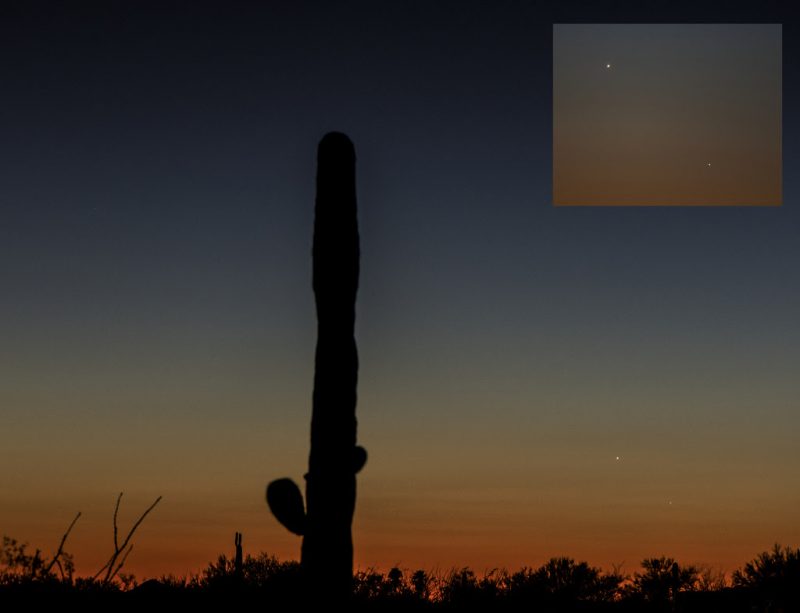 View larger. | Eliot Herman in Tucson, Arizona, caught Venus and Mercury on the evening of March 2, 2018. 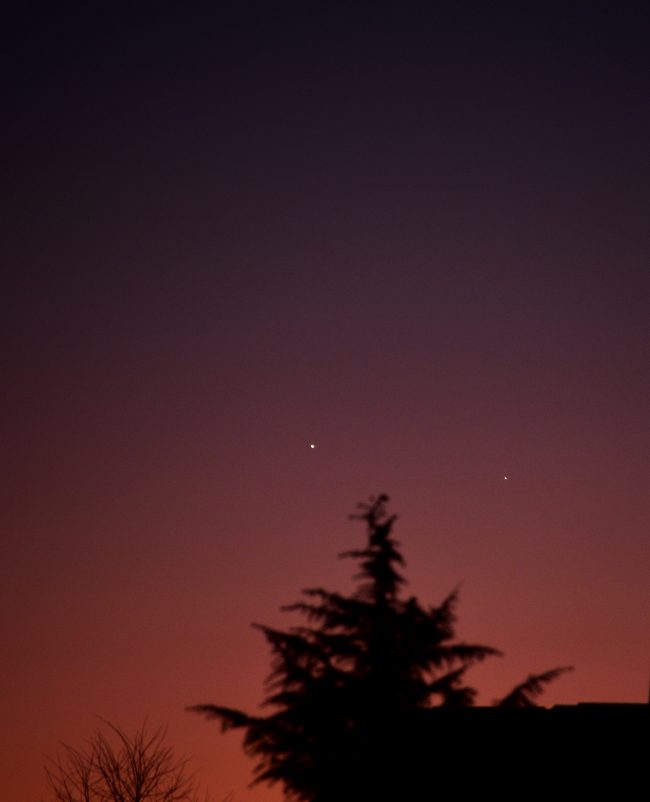 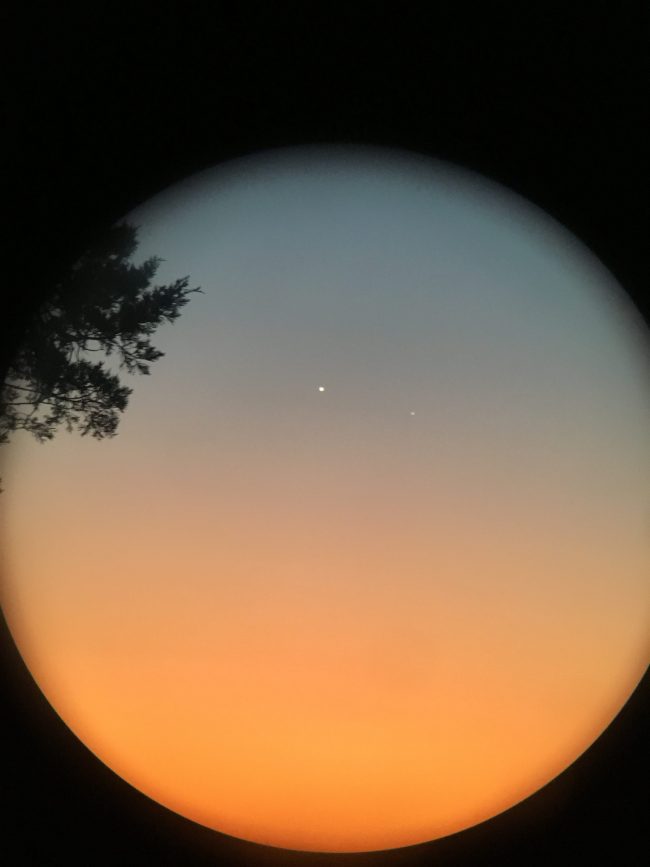 This is cool! Quentin Humberd in Jackson County, Tennessee, used a pair of 7X50 binoculars – and a handheld iPhone 6s – to capture this image of Venus and Mercury on March 3, 2018. He wrote: “My first view of Mercury.” 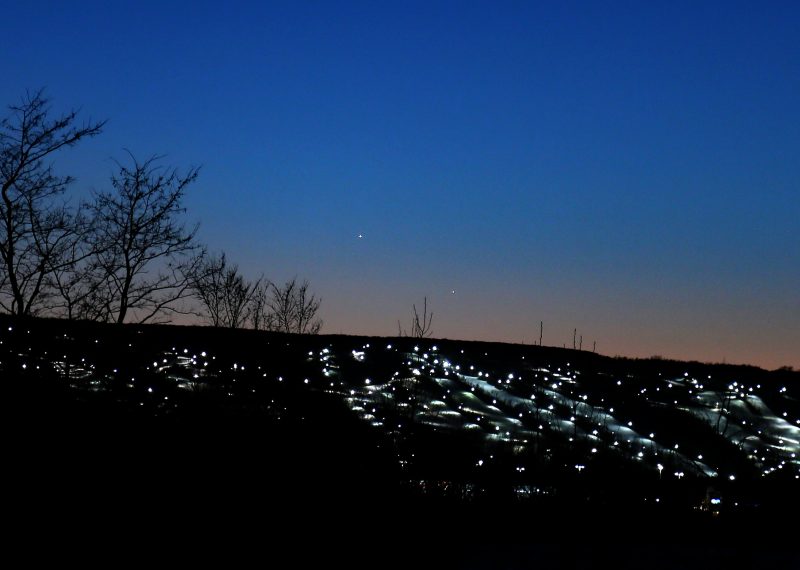 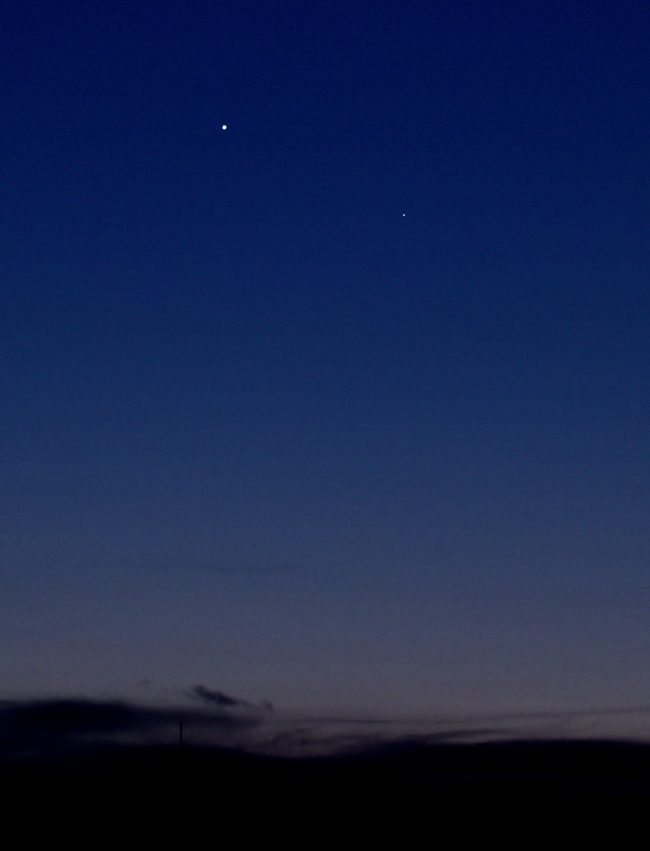 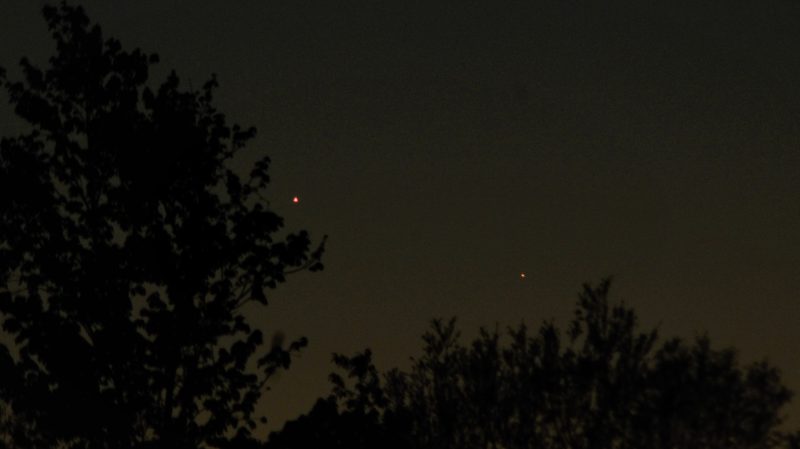 Michael Holland Sr. in Lakeland, Florida, wrote: “Mercury being as elusive as it is was no match for me tonight. Thanks to the wonderful heads up articles by the staff at EarthSky.” Canon EOS Rebel T5 300 mm lens ISO 400. 0.3 second exposure f/6.5. 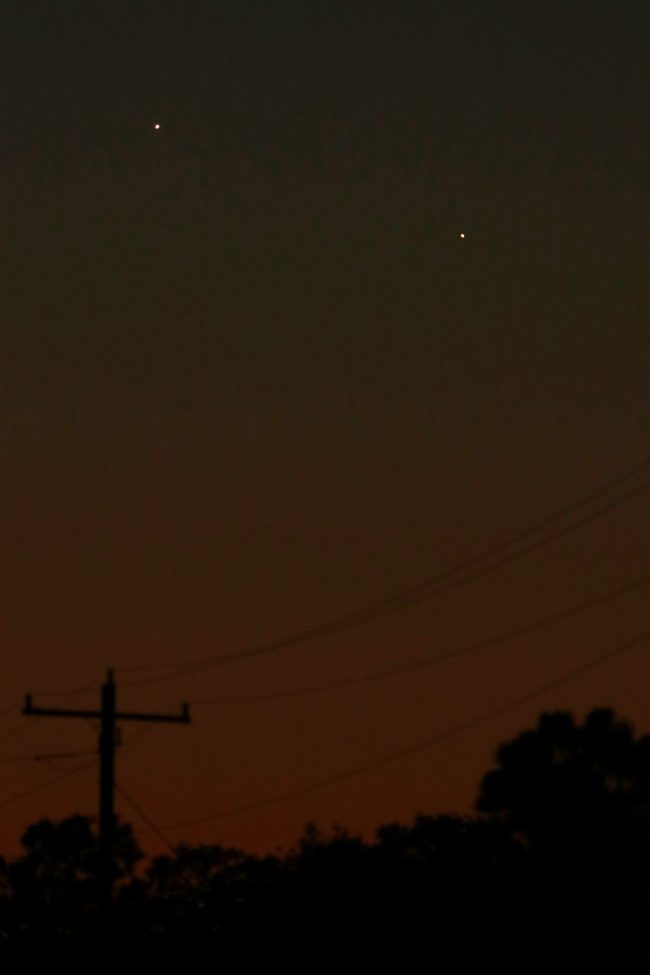 Victor C. Rogus in Arcadia, Florida, caught the pair on March 3. He wrote: “I was not sure if I had a good enough western horizon for this event, so I used my ‘grab and go’ telescope and mount. I jumped in my car and found an appropriate spot near a cow pasture. Mosquitoes quickly discovered me, and they seemed to know that I had forgotten my repellent. They had a feast on me while I searched for brilliant Venus that would guide me to Planet Mercury. I could not look away as the two beautiful planets joined together in conjunction while the sun set. Viewing these magnificent sights is always worth the effort, and this time was no different.” Canon 80d camera, Vixen D/66mm x F400mm “Star Guy” Apo refractor @F6, on a Celestron ALT AZ mount. 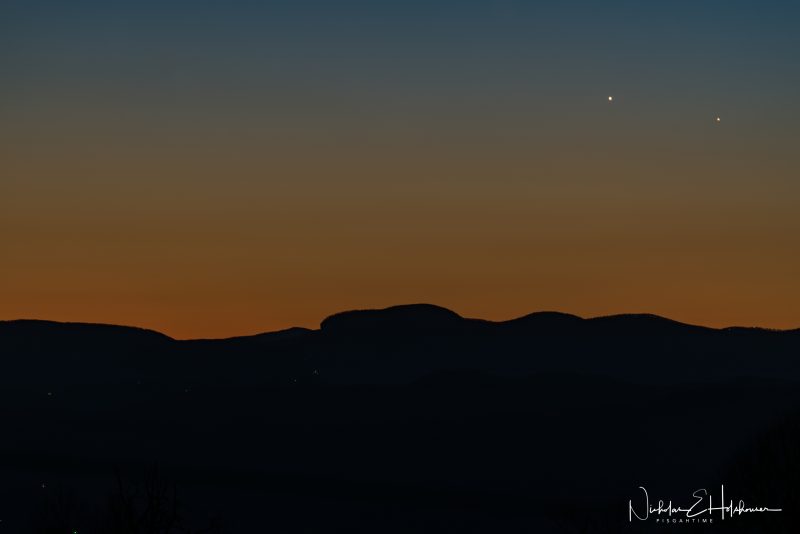 Nicolas Holshouser in Brevard, North Carolina, caught the pair on March 3, 2018. He wrote: “Just south of Brevard there’s a nice high ridge with a west view over a dark valley. The far ridge is near Lake Toxaway, North Carolina, about 17 miles away. Mercury finally popped out about 7 p.m., I got this shot as the blue left the sky, midway through nautical twilight.” 260mm focal length, 3 sec exposure at f/7.1, ISO 100.

Bottom line: Photos of the Venus/Mercury conjunction in March 2018.