Venus has been the “morning star,” shining brightly near the horizon just before sunrise. Photographers are capturing pictures in January 2021 and sharing those images with EarthSky. 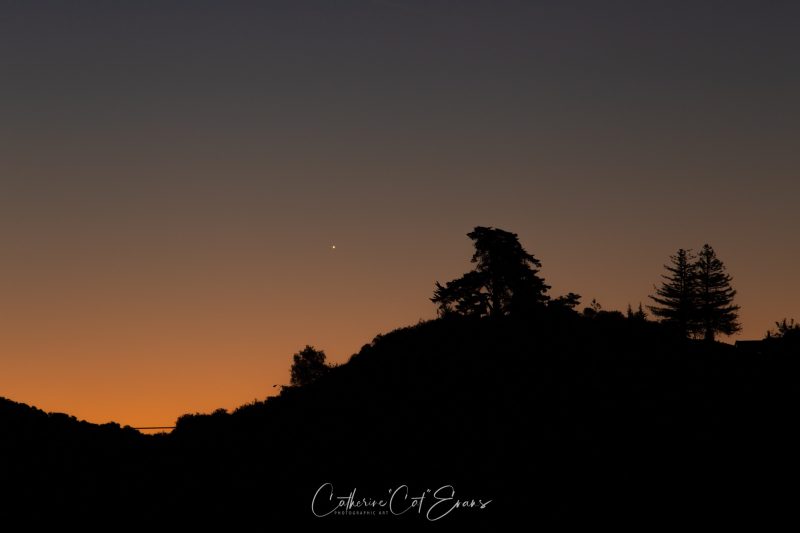 View at EarthSky Community Photos. | Catherine Evans caught Venus near daybreak on Sunday morning (January 17, 2021) from the Edna Valley in San Luis Obispo, California. She wrote: “Closer and closer to the sunrise, so it won’t be seen much longer.” So true, Catherine! Thank you. Venus will be traveling behind the sun for the coming months, only to emerge in the evening sky again in May. If you have a clear sky to the eastern horizon, you can still snag a last look at Venus, low in the east before sunup.

Venus, the brightest planet as seen from Earth, is sinking toward the sun a bit more each morning. Soon Venus will no longer be the “morning star,” as it will be too close to the sun for viewers to spot. But before it goes, photographers from around the world have been sharing their photos with us.

Why is Venus getting so close to the sunrise now, as seen from Earth? The answer is that Venus – in its smaller and faster orbit around the sun – is about to “turn the corner” ahead of us in orbit. In other words, Venus is about to pass on the far side of the sun from Earth. Its faster motion around the sun relative to Earth will bring the sun between us and it, and we won’t be able to view the planet from Earth. Venus will be gone from our sky from about late February to perhaps late April. It’ll be most nearly behind the sun, at superior conjunction as viewed from Earth, on March 26. Then Venus will return – to our evening sky this time – in May, appearing near the western horizon as a surprisingly bright evening “star.”

Look outside some morning soon, and you’ll still see Venus easily above the sunrise glare. Then watch over the coming weeks, as the planet inches closer to the sunrise and finally disappears in the glare of morning twilight. Can you cast your mind outward into space to imagine Venus fleeing ahead of us in orbit?

If you get a good photo, submit it here.

And bookmark this post! We’ll be posting Venus photos here, until Venus disappears from the morning sky.

The 2021 lunar calendars are here! Going fast. Order yours before they’re gone. 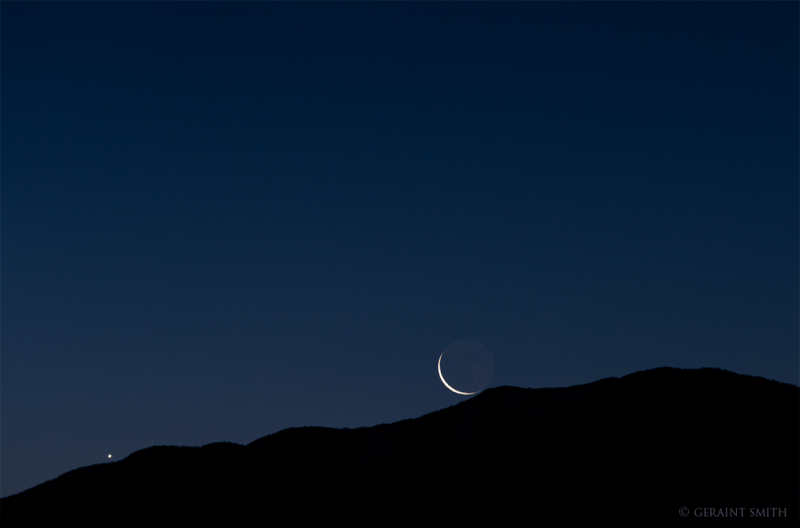 View at EarthSky Community Photos. | Geraint Smith in San Cristobal, New Mexico, captured this photo of Venus and the moon on January 11, 2021. He wrote: “At 6:23 am the coyotes in the village made their announcement. At 6:24 am the waning crescent moon peeked over Taos Mountain. At 6:29 am, Venus joined her. Taos Mountain is the sacred mountain of Taos Pueblo the Red Willow People. The most heart-stopping sight I’ve seen in a while.” Thanks, Geraint! 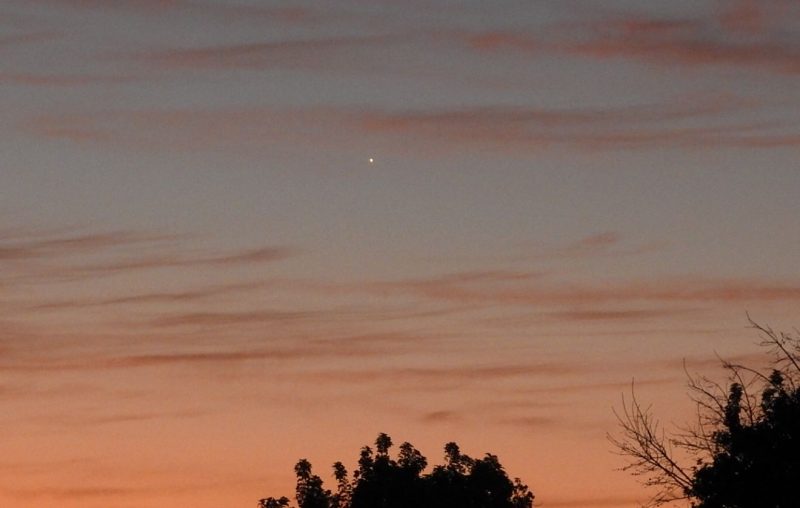 View at EarthSky Community Photos. | Randy Shetter in Torrance, California, captured this photo of Venus and the sunrise on January 12, 2021. He wrote: “Photo was taken of Venus in the early morning sunrise with the clouds creating a tangerine hue in the sky.” Thanks, Randy! 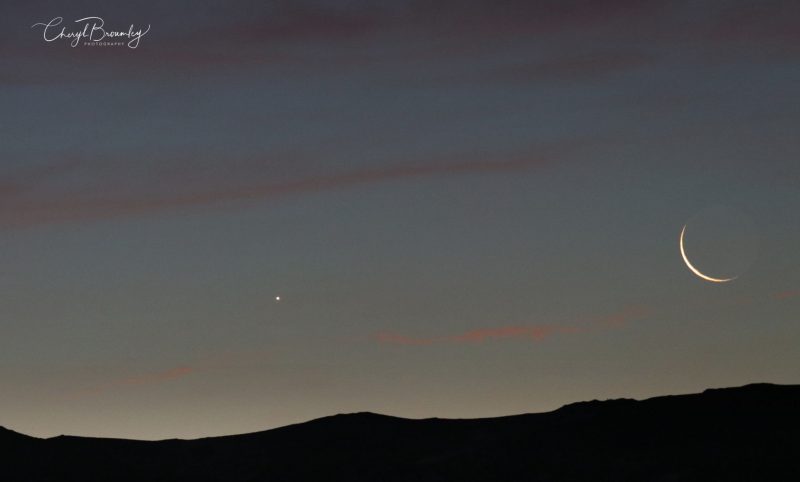 View at EarthSky Community Photos. | Cheryl Broumley in Minden, Nevada, captured this photo of Venus and a crescent moon on January 11, 2021. She wrote: “Early morning just before sunrise.” Thanks, Cheryl! 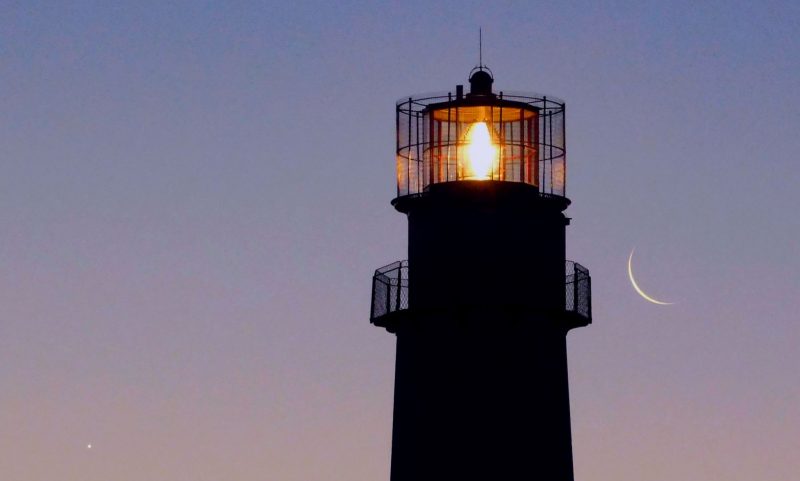 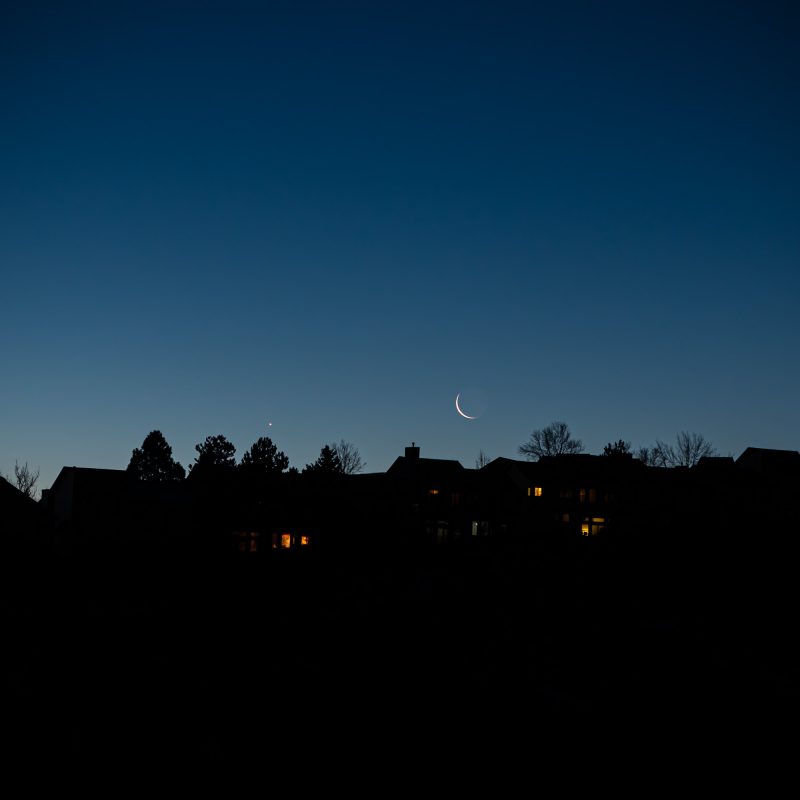 View at EarthSky Community Photos. | Barbara Banks in Golden, Colorado, captured this photo of Venus and the moon on January 11, 2021. She wrote: “Got up early at home to see the promised slip of a moon next to Venus. Good to be alive on this lovely morning.” Thanks, Barbara! 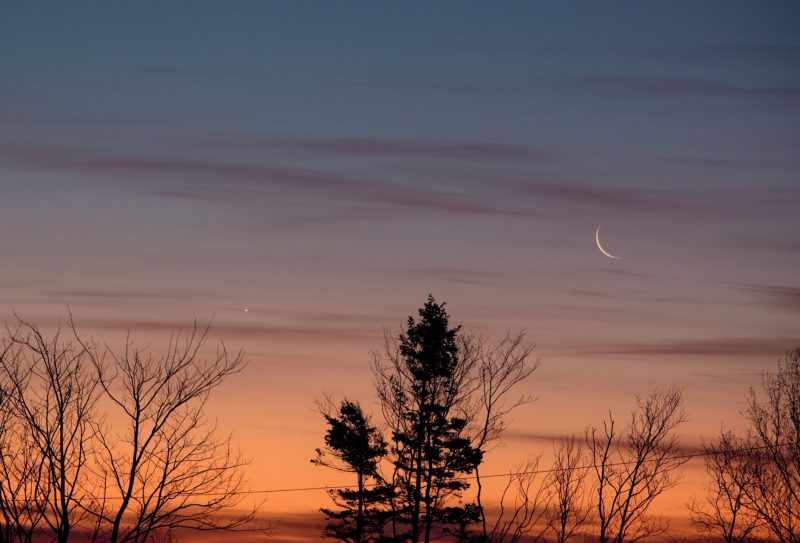 View at EarthSky Community Photos. | David Hoskin in Halifax, Nova Scotia, Canada, captured this photo of Venus and a crescent moon on January 11, 2021. He wrote: “Venus and very old crescent moon at dawn.” Thanks, David! 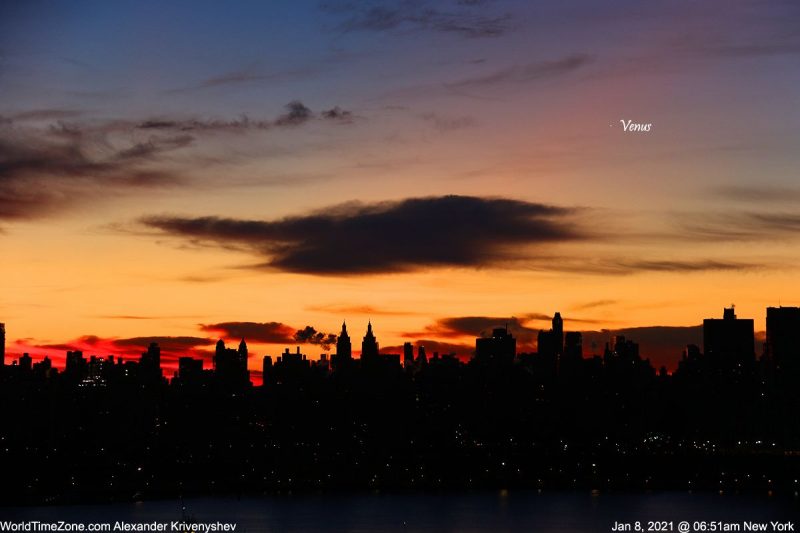 View at EarthSky Community Photos. | Alexander Krivenyshev in New York City, New York, captured this photo of Venus on January 8, 2021, right before sunrise. He explained that “the ‘morning star’ Venus shines in the dawn sky above New York City.” Thank you, Alexander! 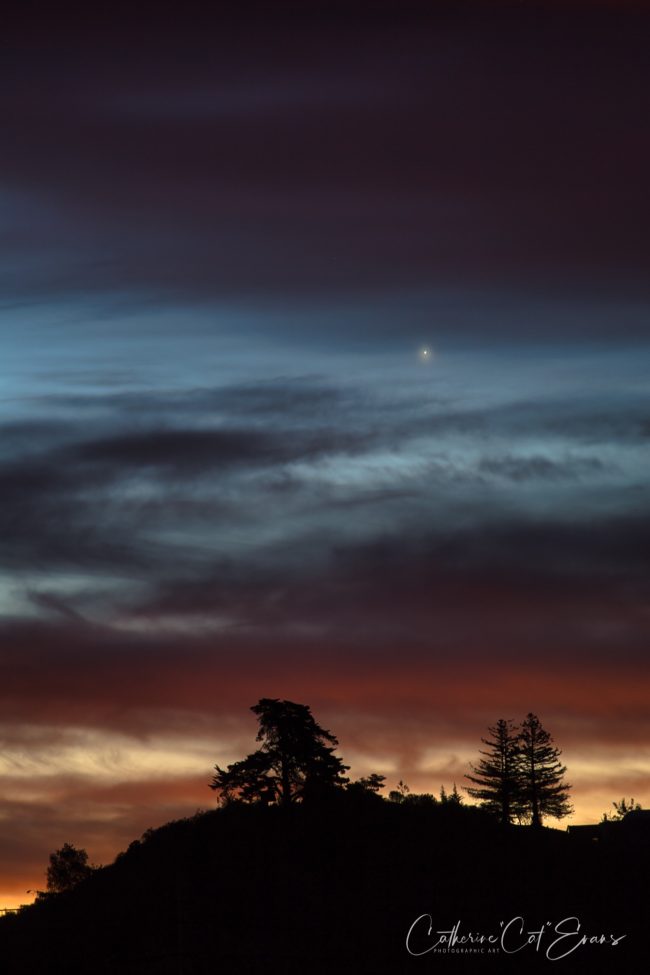 View at EarthSky Community Photos. | Catherine Evans caught Venus rising in the morning twilight from the Edna Valley in San Luis Obispo, California, on January 7, 2021. She wrote: “I have been watching Venus for awhile, not knowing it was Venus until I looked it up on my Sky Guide app. The clouds add to the image but she quickly disappeared after one shot.” Thanks, Catherine! 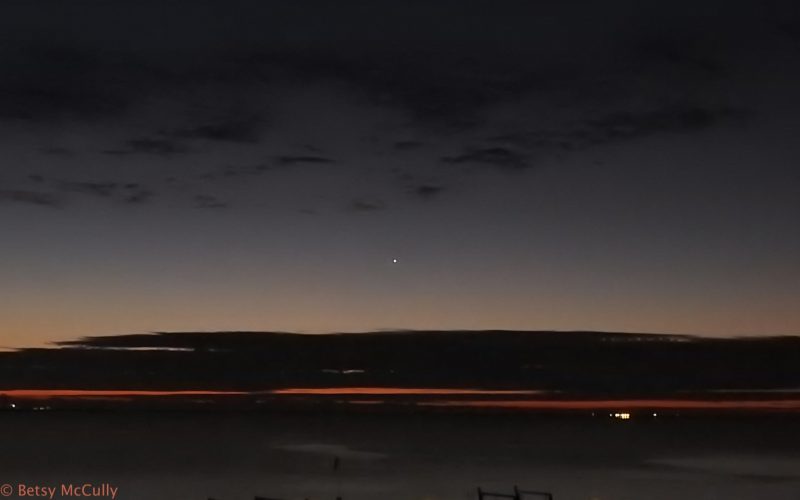 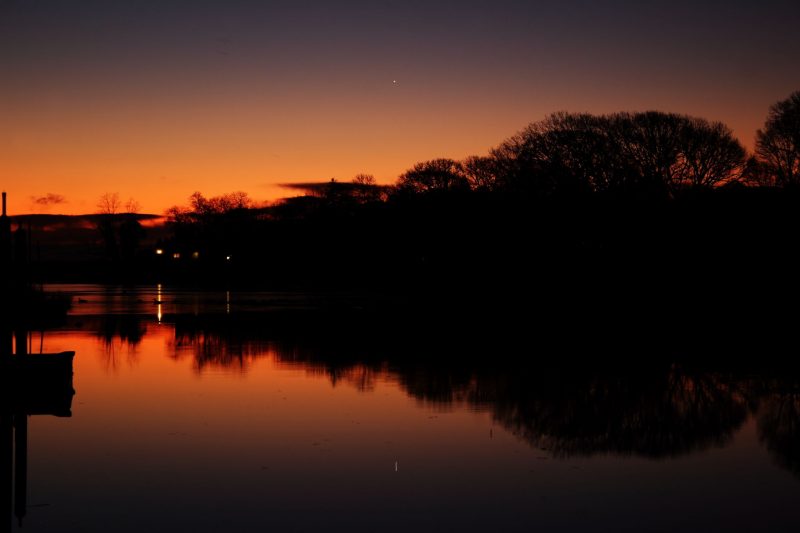 View at EarthSky Community Photos. | Steven Bellavia in Mattituck, New York, captured Venus at 6:30 a.m. on January 5, 2021. He wrote: “Venus is still a morning star. She reaches superior conjunction on March 26, and will then slowly become an evening star.” Thanks, Steven!

Bottom line: Photographers are sharing their photos of Venus spotted in the early morning light in January 2021. Catch the planet before it disappears from view in February. Submit your photos here.