The first week of 2018 was a cold, wet, stormy and dangerous one on both sides of the North Atlantic. On the day after the January 1 supermoon – closest full moon of 2018, expected to bring higher-than-usual tides – Storm Eleanor hit Europe with winds of up to 100 mph (160 km/h). The wind and extra-high tides caused flooding, hampered travel, injured and killed people, left tens of thousands of homes without power across the UK, Ireland and other parts of Europe. By Thursday, as the storm moved from the coast into the rest of western Europe, there was also an avalanche risk in some parts of Europe, due to heavy, wet snows. Meanwhile, across the Atlantic, on January 3 and 4, storm conditions came to the U.S. An unusual winter storm passed through Florida, Georgia and South Carolina, intensifying late in the day on the 3rd to become one of the strongest winter storms in the U.S. East in modern history. Although the crazily-named bomb cyclone did wind down over the mid-Atlantic states, the storm was still hammering the U.S. Northeast with heavy snow and high winds late Thursday. The winds are expected to die down by Friday, but the Northeast is still bitterly cold. Many EarthSky readers pointed out, or captured, the videos and photos on this page. We thank you all.

First, this week’s storm news from Europe. On January 3, Ineke Geernaert wrote to us from The Netherlands:

Yesterday, the moon was just over its maximum, but western Europe had a good storm: gale force 10 along the Dutch coast. And because of the supermoon’s gravity, the tides were extremely high. For the first time ever, all five major flexible storm flood barriers had to be closed! We are a river delta country, after all. 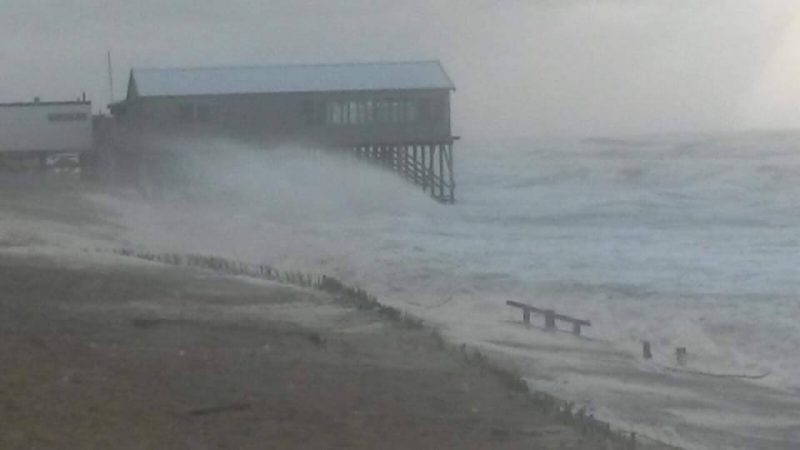 A reader posted this photo at EarthSky Facebook, from Netherlands, at the beach of Camperduin. This is a restaurant named Strandpaviljoen Luctor et Emergo; more pics on their Facebook page. This photo is by Rob Geuzebroek.

Aliashraf Purgafari posted the following video about Storm Eleanor below in his YouTube stream. Notice not only the snow, but also the flooding … 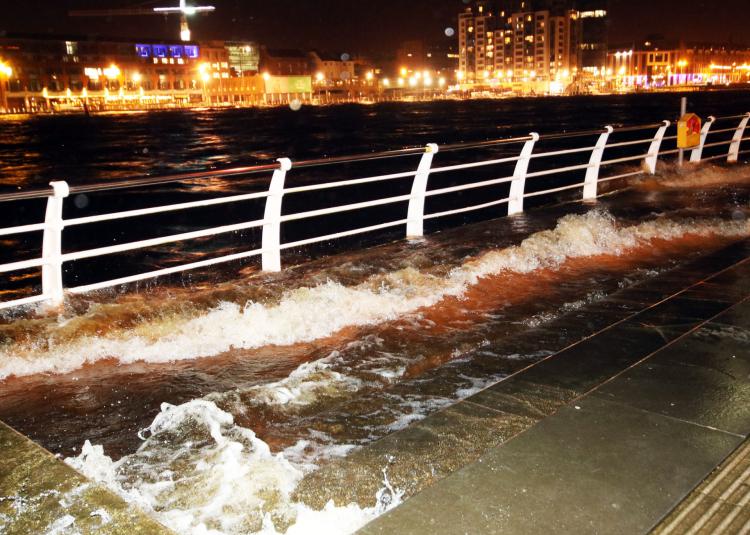 Water surging during Storm Eleanor on O’Callaghan Strand on January 2, 2018, the night after Monday night’s supermoon, which was, by the way, the closest supermoon of 2018. Image via Brendan Gleeson/ Limerick Leader.

Meanwhile, across the Atlantic, there were high tides in some places on Tuesday, but no storm winds to push them ashore … yet. The image below, from Massachusetts, shows the calm before the storm. 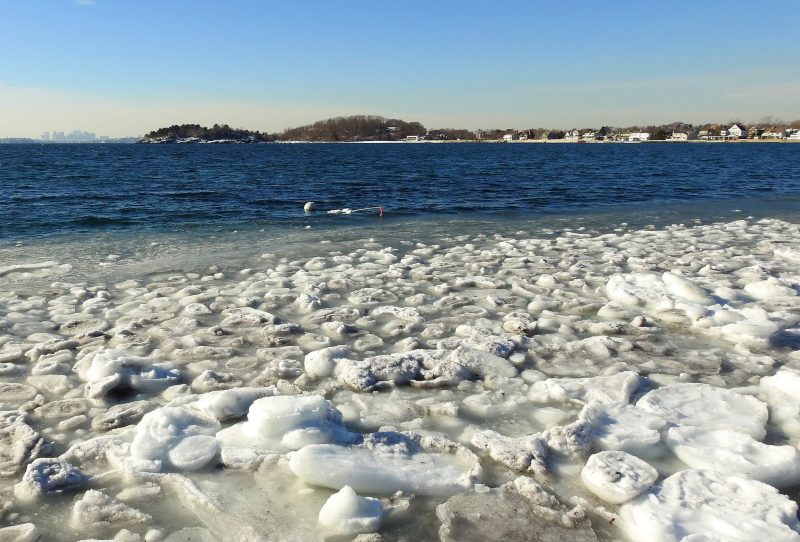 EarthSky Facebook friend KL Chipman wrote: “This is my little sea glass beach in Nahant, Massachusetts. That is Boston, off in the distance! The ice makes fantastic noises as the tide rolls in! This was an hour before high tide, on January 3.”

On January 3 and 4, conditions changed as a winter storm called Storm Grayson brought cold temperatures and blizzard conditions, plus coastal flooding, to the East Coast. As Storm Eleanor had a few days earlier in Europe, Storm Grayson snarled travel, and people braced for power outages. Forecasters spoke of a “bomb cyclone,” so called for this storm’s rapid drop in atmospheric pressure. The term “bomb cyclone” isn’t a media invention, by the way. A storm is considered a “bomb cyclone” by meteorologists if its pressure falls 24 millibars in 24 hours. This storm’s pressure dropped 53 millibars in 21 hours (and 59 millibars in 24 hours).

#GOESEast captured the full path of the #BombCyclone exhibiting a rare and extremely rapid rate of intensification on the East Coast with some of the coldest wind chills of the season and near zero visibility in the snow bands @NWS. #Blizzard2018 More: https://t.co/mbgRYot60A pic.twitter.com/GKlFTaLJBI

New York had whiteout conditions in many places …

WHITE OUT in Riverhead/Suffolk County, NY with this band dumping at 1-2"/hour with wind gusts 40+ MPH. Up to a foot of #snow followed by record sub-zero cold this weekend. #Grayson #frozenAmerica pic.twitter.com/B2Got7JCl0

We do not recommend going out and floating on icebergs …

Here’s @kathrynburcham showing why she’s the best in one the business, floating on an ice berg to provide updates .. @boston25 pic.twitter.com/iPJf9EUiv4

The images below are from EarthSky readers. If you have an image you’d like to submit, please submit here. 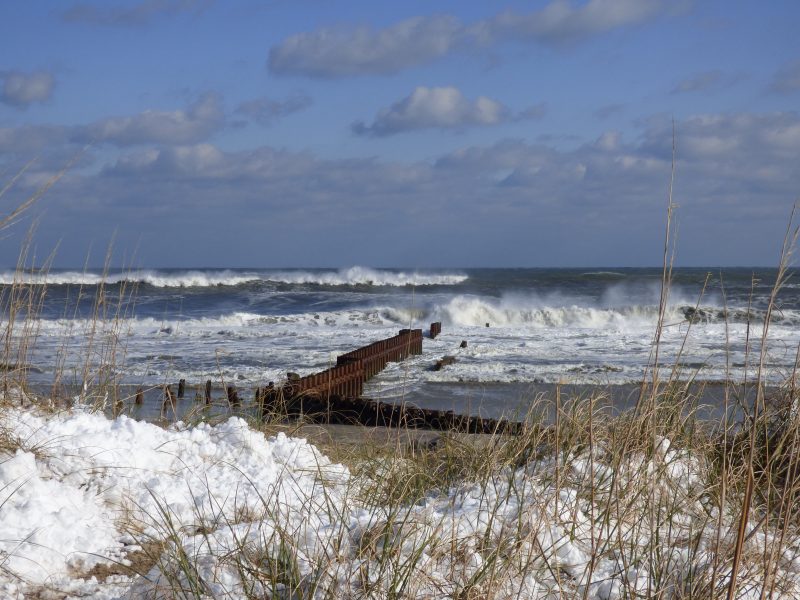 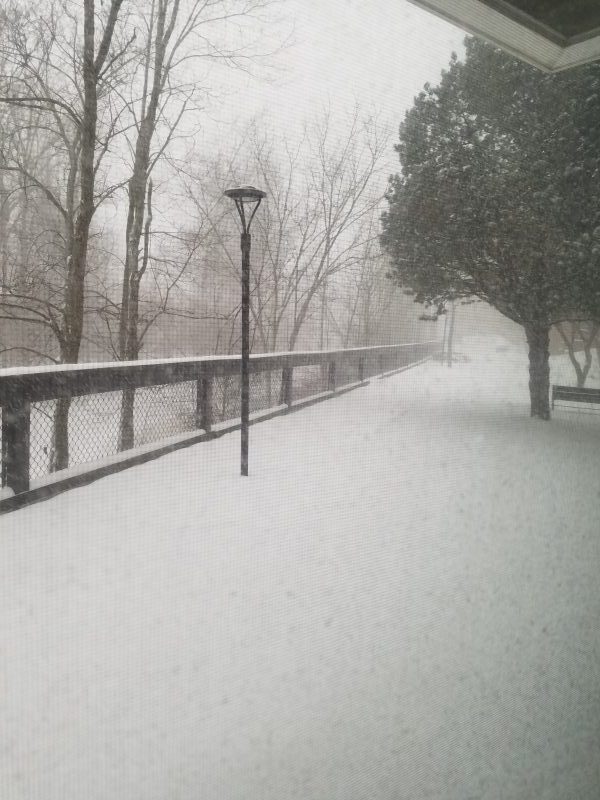 Loretta M. Diaz wrote on January 3: “This is a picture of my back yard in at the start of the major Nor’easter we are having in Boston, Massachusetts today.” 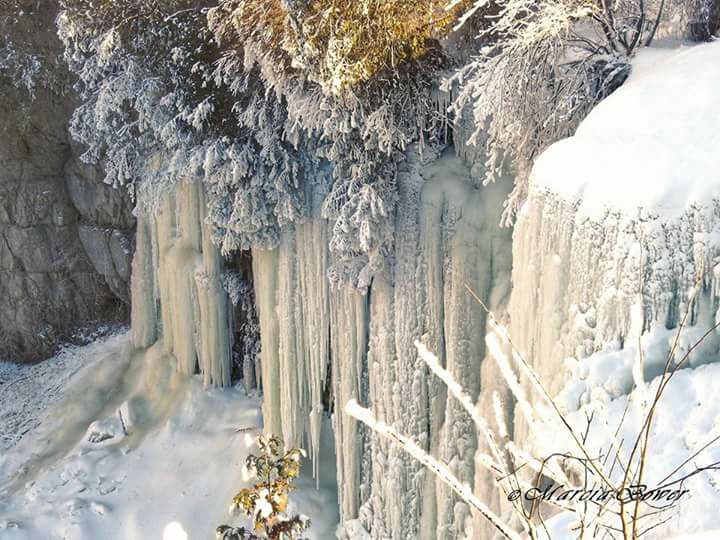 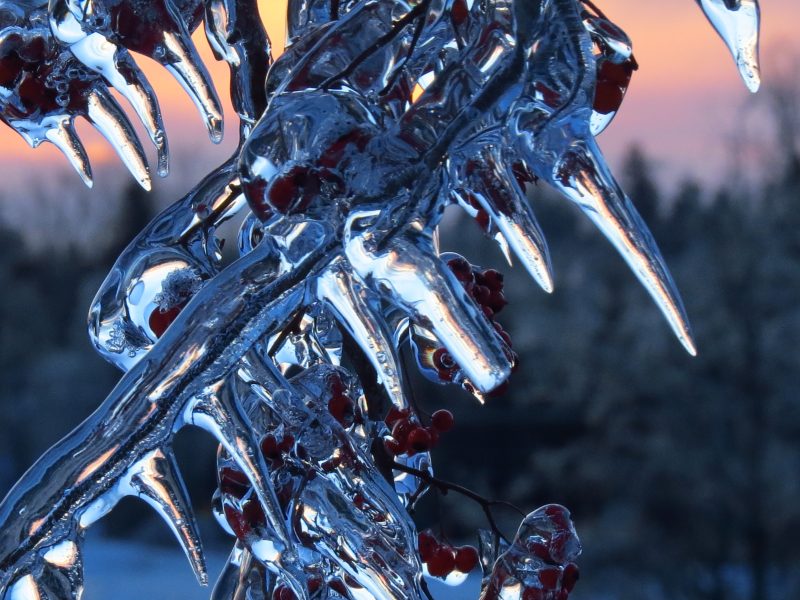 Of course, it’s not just Europe and the U.S. Northeast experiencing winter now. Gloria Fama sent this image from Langley, British Columbia, on the Pacific Ocean side of North America. She wrote: “The area had been shut down on Dec 29th with a severe ice storm. Every twig was thickly coated. Hundreds of beautiful trees were decimated. Icicles formed then the branches broke into tortuous formations. It was a terrible beauty.”

Bottom line: A collection of images from Storm Eleanor in Europe, and the bomb cyclone in the U.S. Northeast.