This is quite a feat! The old moon one morning, and the young moon the following evening, centered on the August 2020 new moon. 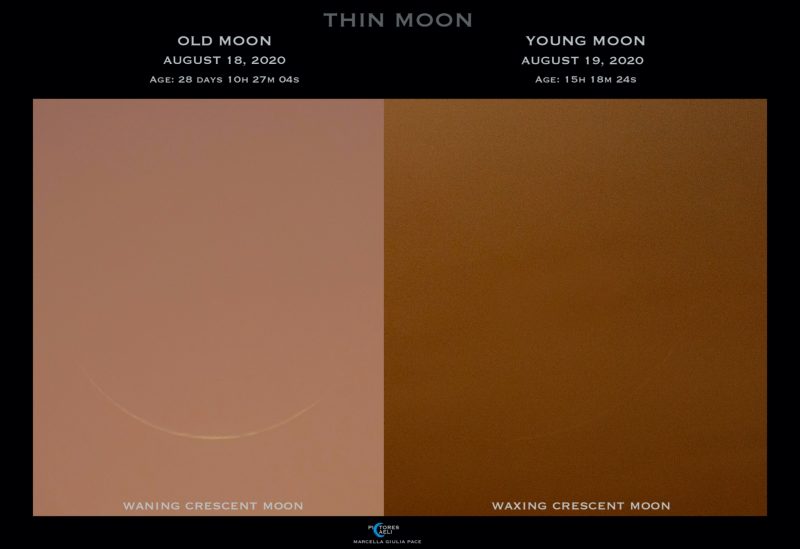 Marcella Giulia Pace in Modica, Sicily, Italy, caught both the old moon low in the east before sunrise on August 18, 2020, and the young moon low in the west after sunset on August 19. Between these two moon captures, new moon occurred on August 19 at 02:41 UTC. Marcella commented:

Yesterday I took a photo of the thin waxing crescent moon, just 15 hours old. I was waiting for so long to try this shoot. All the favorable conditions were there:

– The moon was about 7 degrees from the sun.

– The moon was close to perigee, it’s closest point to Earth (it would have reached it on August 21).

– Good visibility on the horizon.

I tried to shoot without using computer tools to point at the moon so I only used the camera mounted on a normal tripod. I didn’t see the moon with the unaided eye, but I knew the moon would have passed in front of my lens at 8 o’clock (from my position). And so it was: processing the image I managed to get the very thin sickle.

On the August 18, at dawn, I also took the thin waning crescent moon 20 minutes before sunrise.

Bottom line: Photos from Italy of the old moon one morning, and the young moon the following evening.