Peter Lowenstein in Mutare, Zimbabwe, caught this photo of a waxing moon, setting, with what’s called a Golden Handle (the curved feature at top right, jutting up along the line between light and dark on the moon).

It’s a well-known truth among amateur astronomers that – if you’re using a telescope or binoculars – the best place to look on the moon is along the line between light and dark, known as the terminator line. Peter Lowenstein in Mutare, Zimbabwe, posted this beautiful photo at EarthSky Community Photos, and he also emailed this video to us, which he created from images captured in the early morning hours of May 15, 2019. It shows what is called the Golden Handle of the moon … a play of light on the lunar surface, along the terminator line, visible four to five days before full moon. At this time, the high peaks of the lunar Montes Jura (Jura Mountains) are lit by sunlight. They appear as a bright arc, in front of the flat and still-dark plain of lava on the moon, known as the Sinus Iridum (the Bay of Rainbows). It, in turn, is part of the larger lava plain we call the Mare Imbrium (Sea of Rains). Peter wrote:

This is the best Golden Handle I have so far captured and a big bonus for it to have been so clearly visible while the moon was setting.

Using one of the first telescopes in the early 1600s, it’s said, astronomer Galileo Galilei (1564–1642) knew of the Golden Handle and used his observations of it to estimate the height of the lunar mountains. 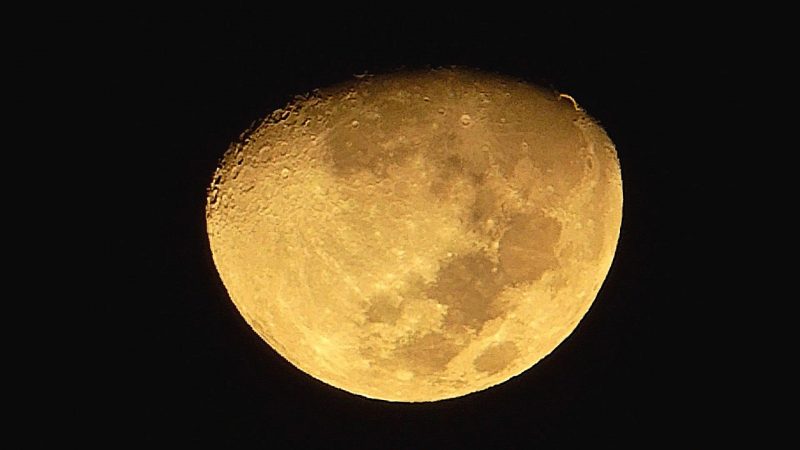 View at EarthSky Community Photos. | Peter Lowenstein in Mutare, Zimbabwe, caught this photo of a waxing moon, setting, with what’s called a Golden Handle (the curved feature at right, jutting up along the line between light and dark on the moon). Thank you, Peter!

Bottom line: Photo of the Golden Handle on a waxing gibbous moon, and a video of this same moon setting.