When dense rain showers are falling into a rainbow, you might see one or more dark spokes centered on the point exactly opposite the sun. These are called rainbow spokes, or rainbow wheels. 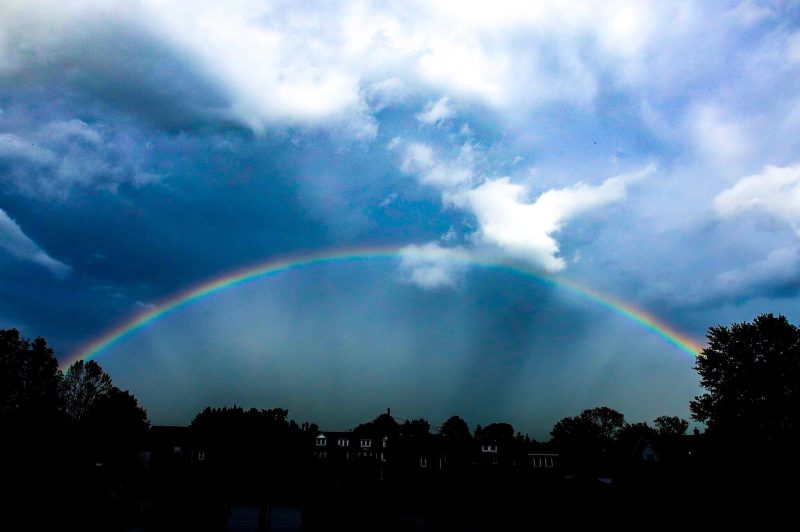 Our friend Karl Diefenderfer in Quakertown, Pennsylvania, captured this image on May 10, 2019, around 6:15 p.m. He wrote:

Rainbow spokes are always a treat …

Shadows in the sky appear by perspective effects to converge towards the antisolar point, which is also the center of rainbows. When clouds or dense rain showers shadow the light falling into your rainbow cone the shadowed raindrops can no longer send the rainbow’s rays towards your eye. The result is one or more dark radial spokes centered on the antisolar point and making the rainbow sometimes resemble a wagon wheel. Bright spokes are similar to anticrepuscular rays except that light is directed into specific directions by large raindrops rather than widely scattered by dust and aerosols.

Sometimes, when clouds are moving fast across the sky, the rainbow wheel appears to rotate.

The brightness of the unshadowed areas illustrate nicely just how much of a rainbow’s light is cast inside its rim at deviations larger than the minimum of the rainbow angle.

Thank you, Karl and Les!