See it! Dance of planets before dawn

Mars emerged before dawn last week, to meet Mercury below bright Venus. And then the moon passed through. Thanks to all who submitted photos! 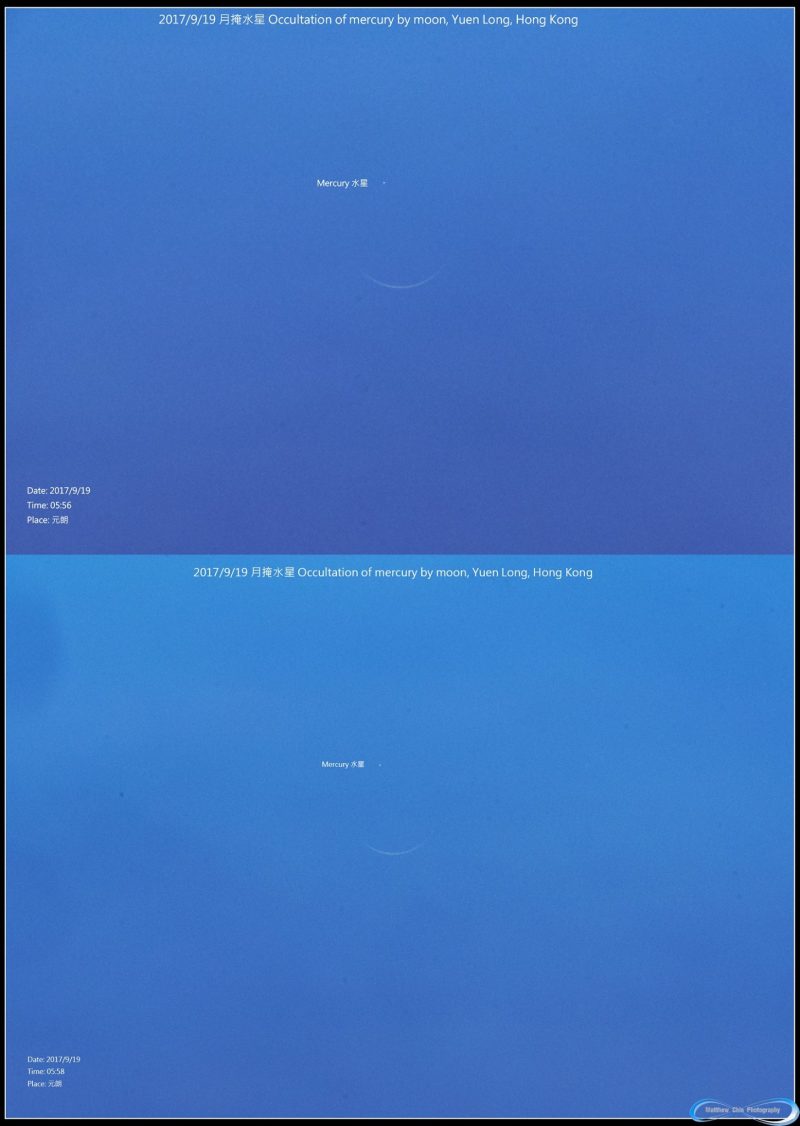 View larger. | On September 18, 3 planets – Venus, Mars and Mercury – were occulted, or covered over, by the moon. Here is the daylight occultation of Mercury, caught from Hong Kong by Matthew Chin. Read more about the occultations. 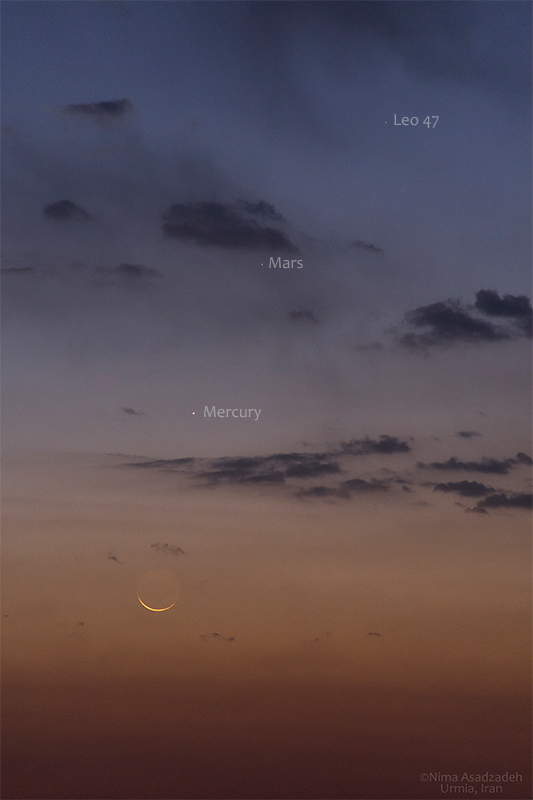 Nima Asadzadeh caught Mars and Mercury near a very thin crescent moon on September 19, 2017, as seen from Urmia, Iran. 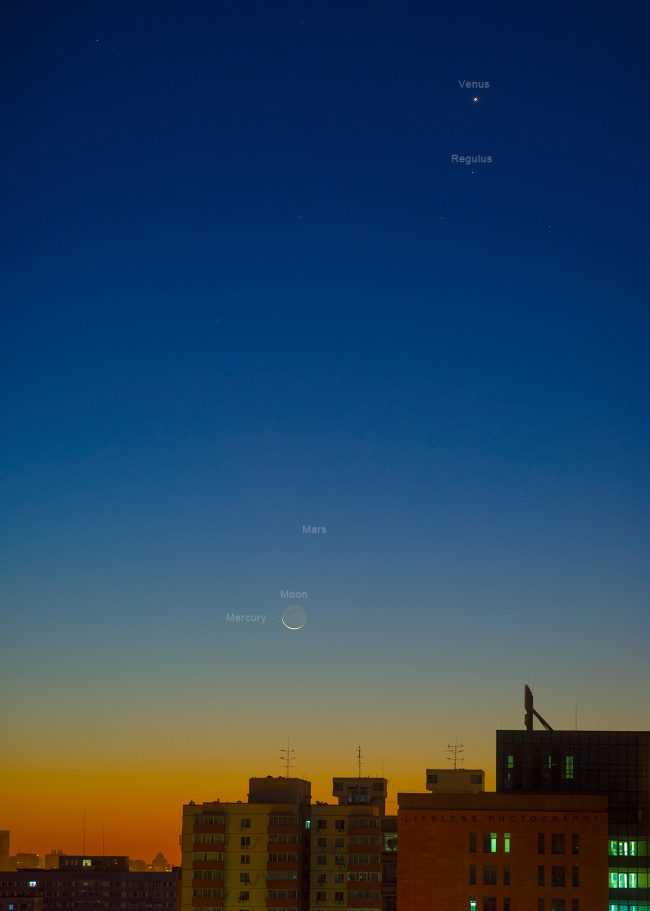 Zheng Zhi in Beijing, China caught the planets on the morning of September 19 and wrote: “Mercury is closer to the very, very thin moon this morning. It’s one of the most beautiful moon phases, especially in the colorful sky before dawn.” 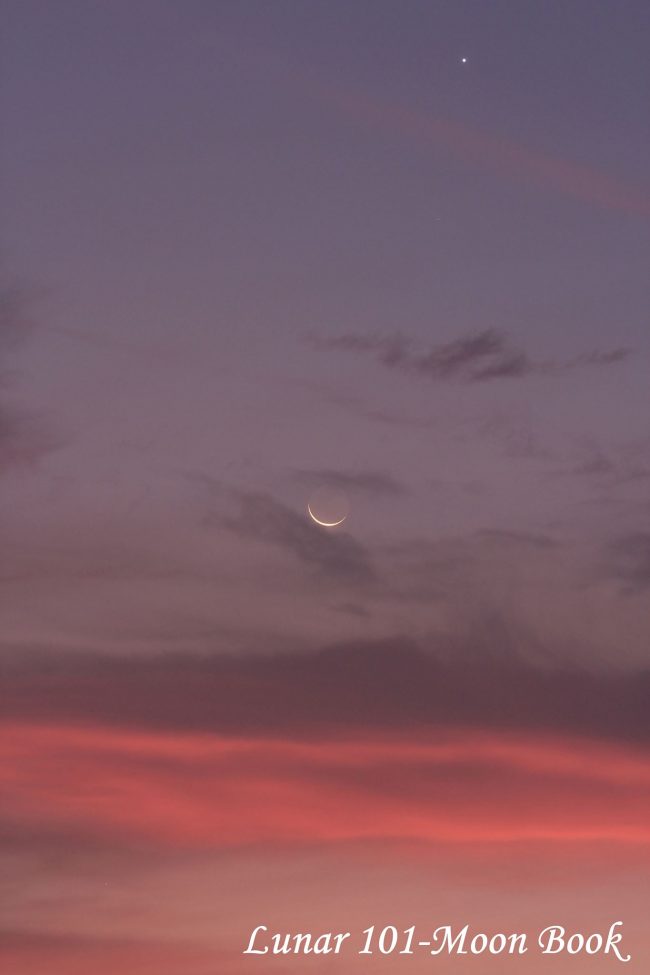 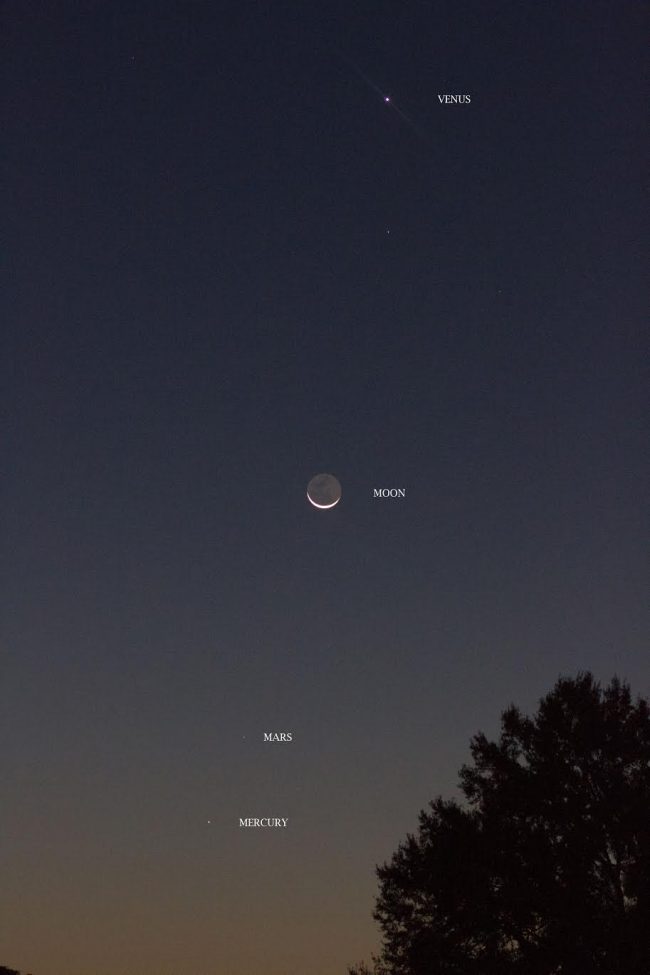 Greg Hogan in Kathleen, Georgia caught the moon and planets on the morning of September 18, 2017. 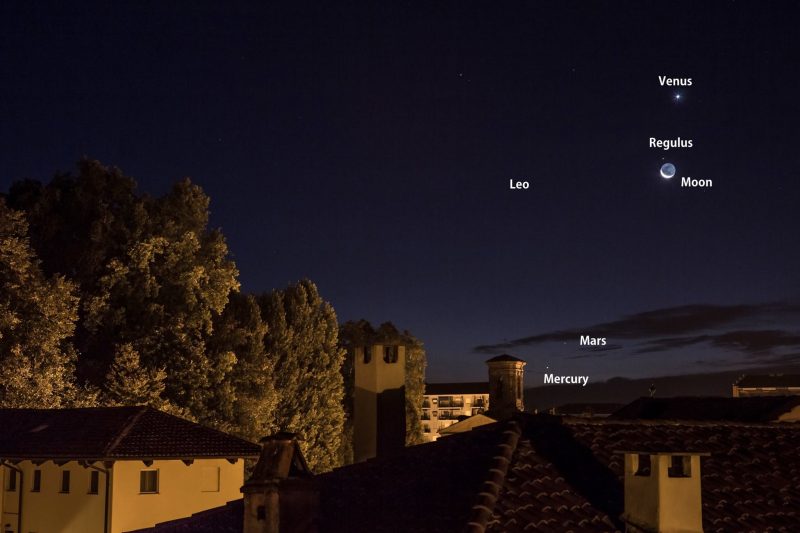 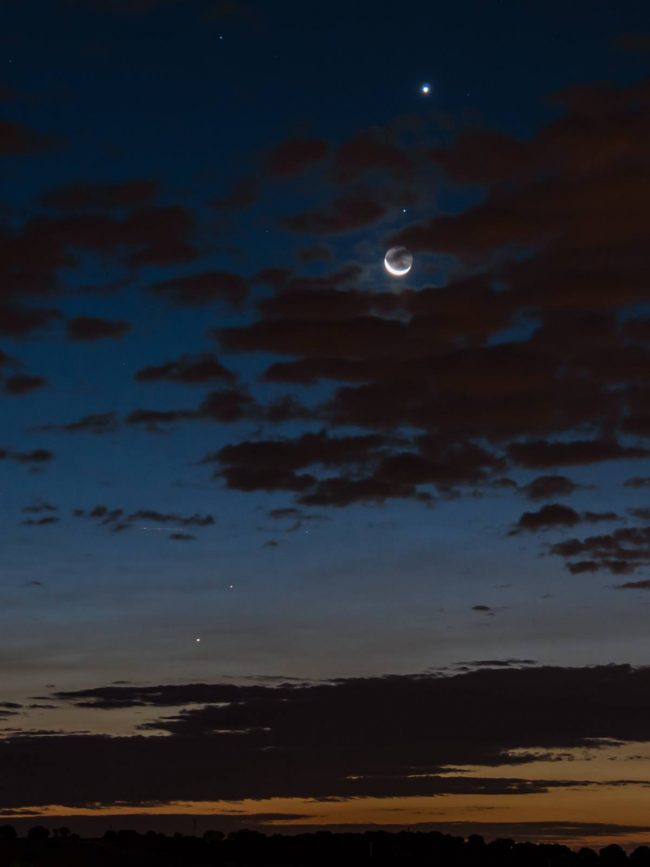 Annie Lewis in Madrid, Spain wrote on September 18: “In spite of the clouds: at the top, Venus. Then the star Regulus close to the moon. Lower down, Mars followed by Mercury.” 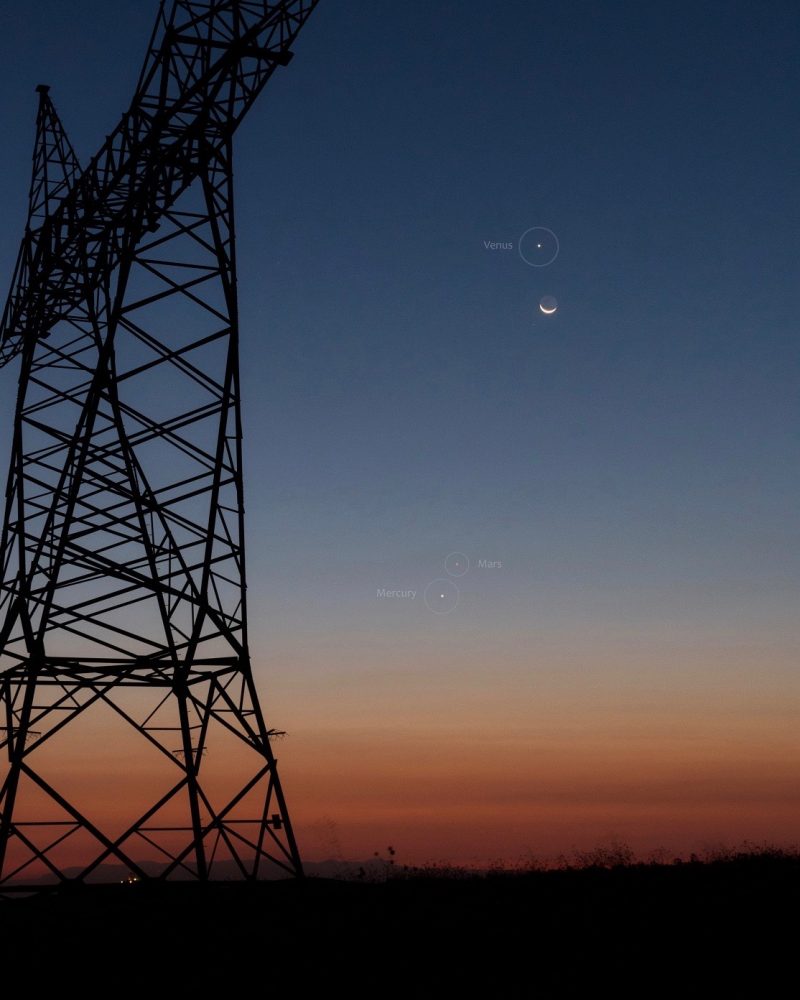 Nima Asadzadeh in Urmia, Iran caught the moon and planets on September 18. 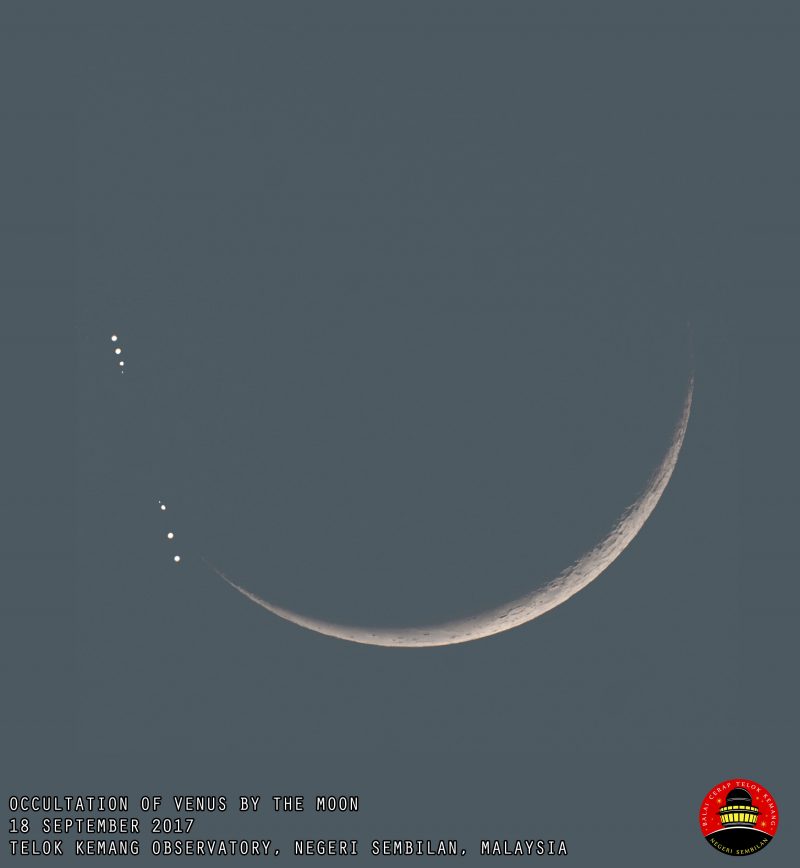 From part of the world, the moon passed in front of Venus on September 18. This composite image of the Venus occultation was taken from Telok Kemang Observatory in Malaysia … “with a perfectly clear sky. In Malaysia is now the rainy season but today we are lucky,” wrote Mazamir Mazlan. The image is actually a sequence of images. It shows multiple Venuses because the group captured multiple images over time, as Earth spun beneath the sky. It shows the edge of the moon blotting Venus temporarily from view. 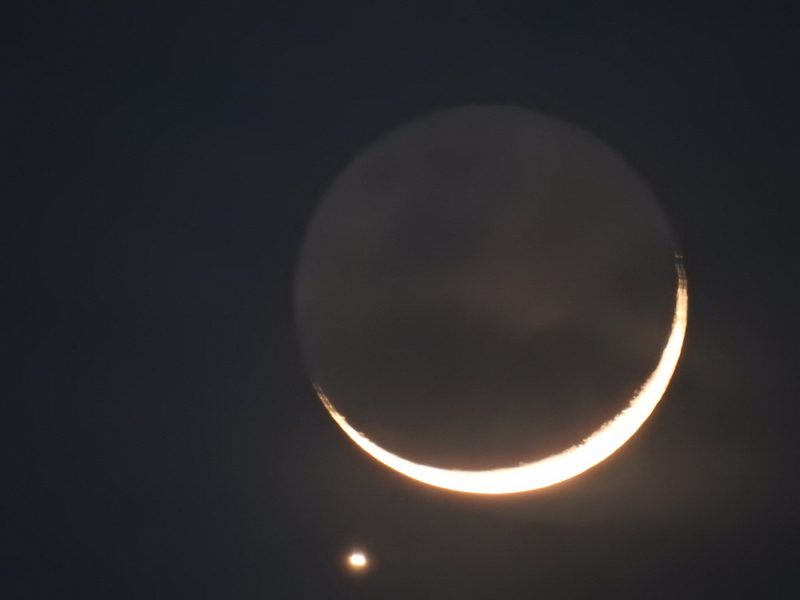 Kannan A in Singapore wrote: “The waning crescent moon in near occulation with Planet Venus in Singapore on September 18. Due to sunrise, the actual occulation of the moon of the Venus was not possible to be observed. Nevertheless, the sight of venus pairing so close to the moon was itself an awesome thing to be seen with the unaided eye.” 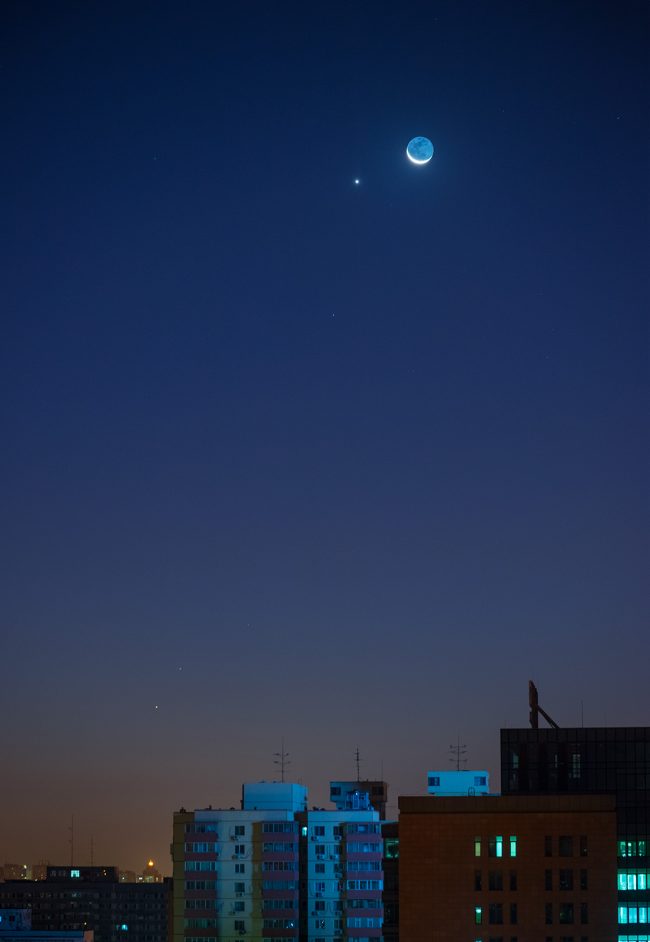 Zheng Zhi in Beijing wrote on September 18: “The moon, star Regulus, Venus, Mercury and Mars lining up these days in dawn sky. The moon and Mercury will be closer tomorrow morning.” 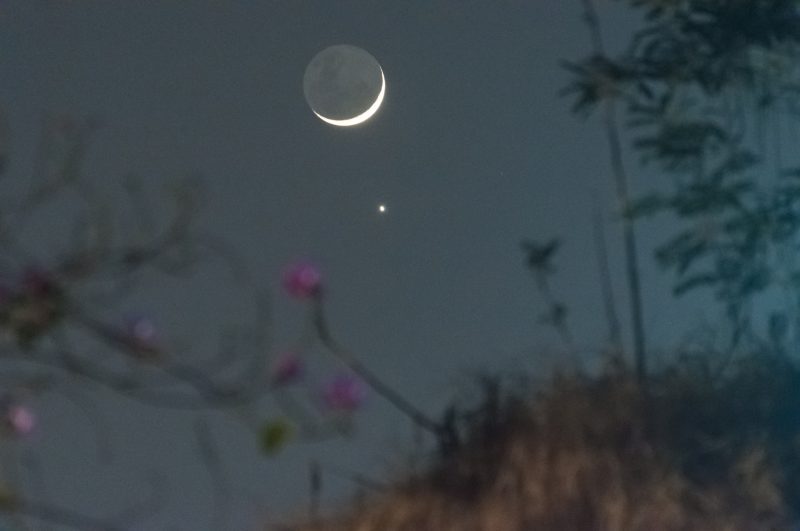 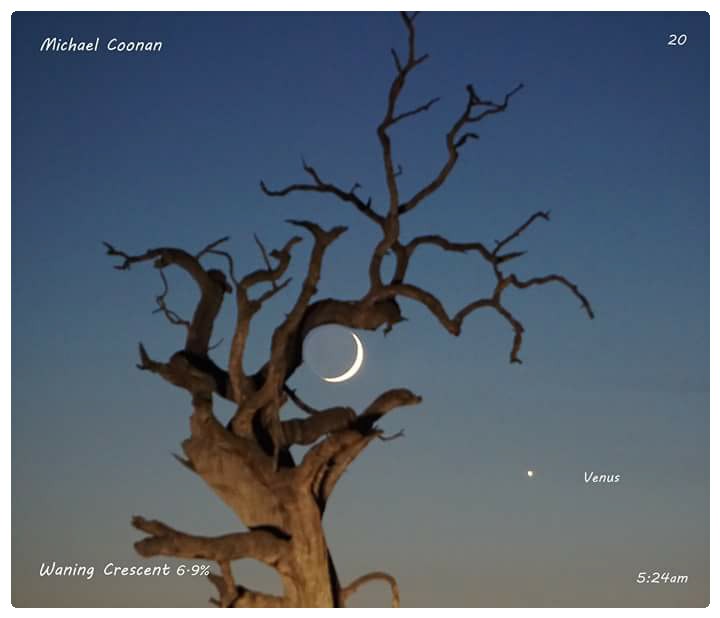 Michael Coonan wrote: “Taken at 5:24 a.m. September 18, waning crescent moon 6.9% with Venus in Wodonga Australia.” Why is Venus to the right of the moon here, instead of to the left as in so many of the photos on this page? Michael has a very southerly location on Earth’s globe, which changes his perspective on the sky. Notice small perspective shifts among many of these photos, taken from around the world. 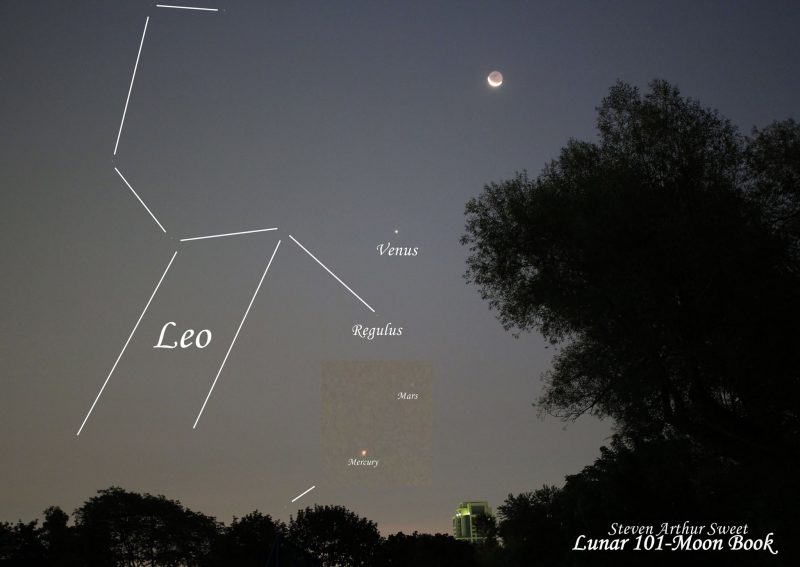 The day before, September 17, the moon appeared above Venus in the predawn sky. Steven Arthur Sweet of Lunar 101 Moon Book wrote: “The Sickle of Leo, Venus, Mars, Mercury and a crescent moon. Sept 17, 2017. Bloordale Park, Toronto.” 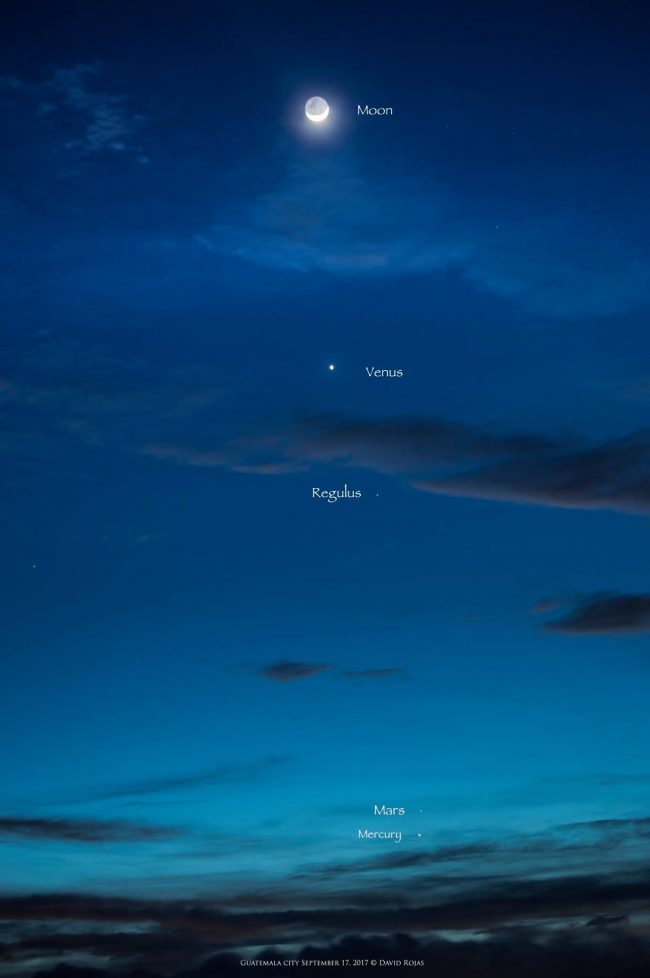 David Rojas captured the planets on September 17 and wrote: “Conjunction of the moon, the planets Venus, Mars, Mercury and the star Regulus of this day, before dawn. The capture was made from the city of Guatemala. Greetings.” 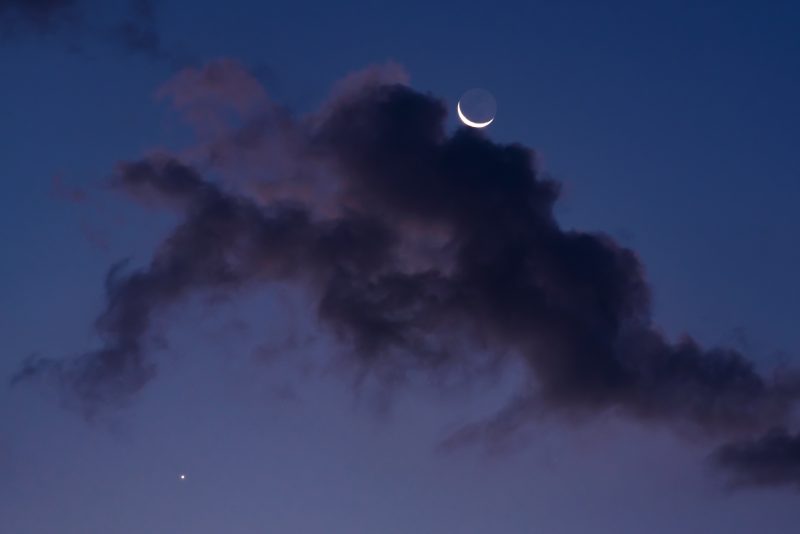 September 17, 2017 moon and Venus … caught by Hope Carter in Martin, Michigan. She wrote: “The glow from the rising sun (still below the horizon here) painted the clouds a delicate shade of pink, making for a beautiful morning here in west Michigan to watch the moon and Venus rise together in the eastern sky.” 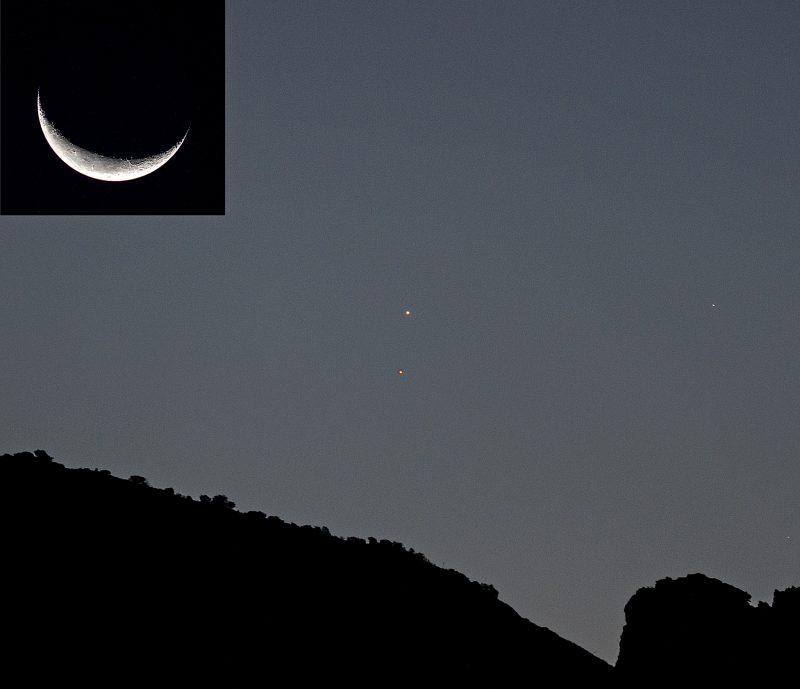 Eliot Herman in Tucson, Arizona caught the Mercury/ Mars conjunction on September 16. Moon inset for size comparison. He wrote: “Captured with a Vixen VSD telescope and a Nikon D810 camera mounted on a stationary tripod … Mercury above and Mars below.” By the way, both appear reddish, especially if you view larger. Mars really is red in color, but Mercury isn’t. In Mercury’s case, the red color often comes from seeing it low in the sky, where we peer at it through an extra thickness of Earth’s atmosphere (same reason a sunset or moonrise looks red). 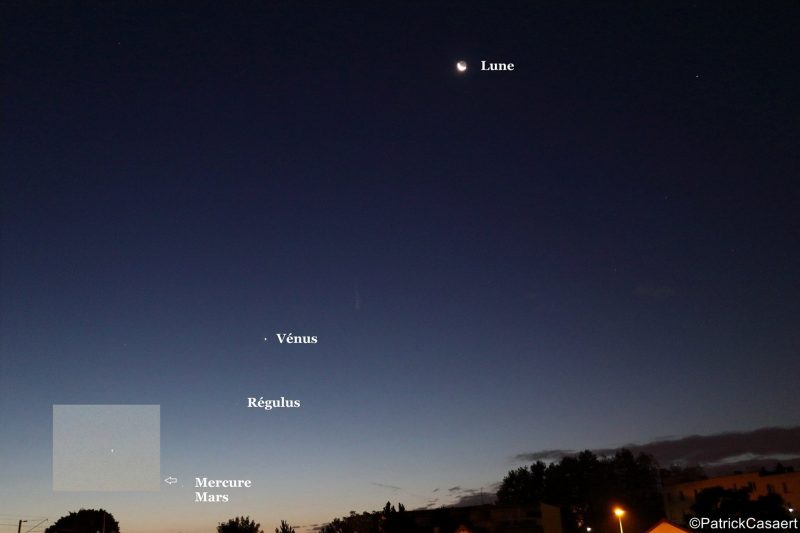 “What a beautiful show at dawn in the sky of Meaux, France,” wrote Patrick Casaert of LaLuneTheMoon on Facebook, on September 16. 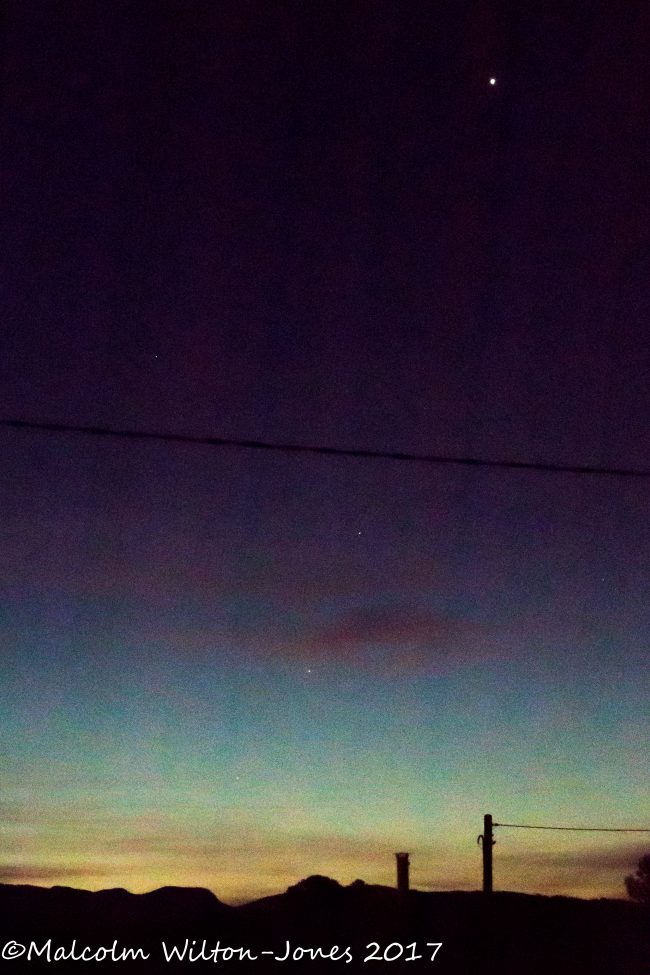 Planets on the morning of September 13, 2017 via Malcom Wilton-Jone in Valencia, Spain. 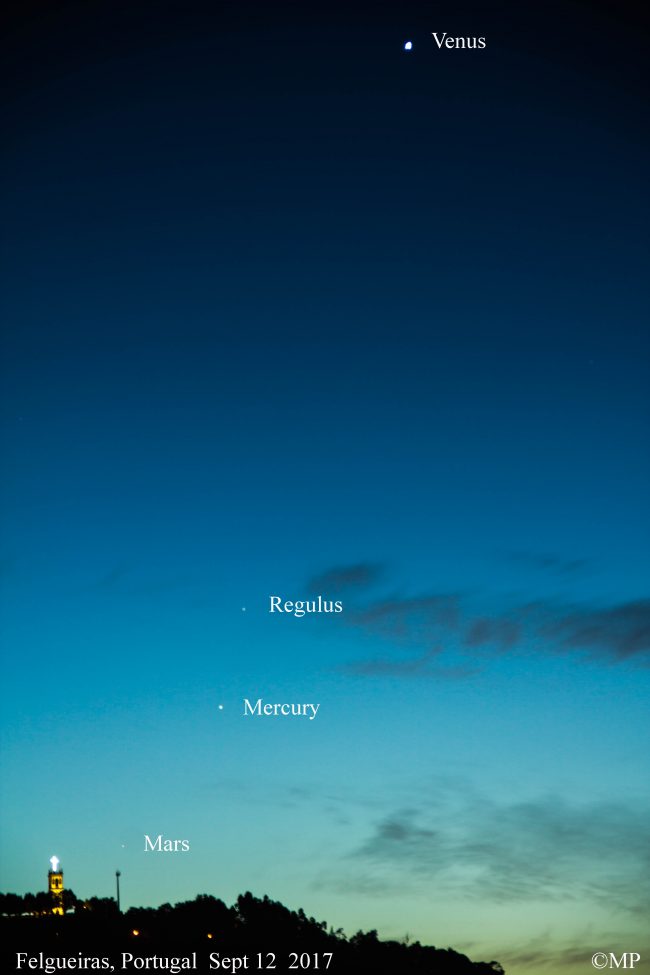 Mario Pereira in Felgueiras, Portugal caught bright Venus – and much fainter Mercury and Mars – on the morning of September 12, 2017. The star Regulus in the constellation Leo also lies along this line.